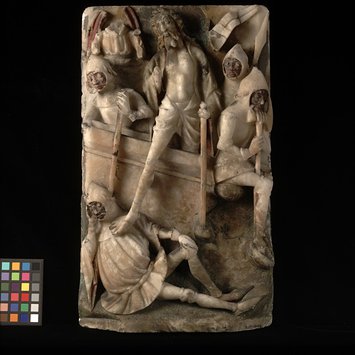 The haloed and bearded figure of Christ, wearing the torse, the loincloth and the shroud over his shoulders, steps from the tomb with his right leg, straight onto the chest of a moustachioed soldier.

The design is unusual and naive, with small ledges providing support for Christ's cross-staff and the soldier on the right. This panel formed part of the same altarpiece as numbers A16-1946 and A.17-1946.

The haloed and bearded figure of Christ, wearing the torse, the loincloth and the shroud over his shoulders, is represented with his head inclined to the right and, presumably, blessing with his right hand. In his left hand he holds the cross-staff and banner of the Resurrection which rests on a small protruding ledge in front of the tomb. He steps from the tomb with his right leg, straight onto the chest of a moustachioed soldier. The soldier wears a pointed basinet, an unusually loose low-belted tunic with wide sleeves, gauntlets and leg armour; he lies asleep across the front of the panel, resting his head on his right hand. Three more figures of apparently sleeping soldiers, wearing low-belted jupons, are represented on the panel, one seated on a ledge on the right of the tomb, leaning his head on his hand supported by his battle-axe, his feet resting on another ledge. The second, behind him, holds a lance and the third behind the tomb on the left of the panel, leans on a spear which he holds in his left hand resting it on the ground in front of the tomb. A half-length figure of an angel, hands presumably raised in prayer, is shown on the top left corner of the panel.

Green paint and the usual daisy pattern remain on the ground at the bottom of the panel. The soldiers' faces are blackened to show their villainy. The background of the top of the panel is gilt. The halo behind Christ is painted blue.

The back of the panel is marked with two long parallel scratches and a large X, formed of two scratches. There are three holes drilled in the back, filled with lead, and holding latten wires. The bottom has been cut away.

Two long parallel scratches and a large 'X' formed of two scratches.
On the back of the panel.

Historical significance: The design is unusual, and particularly naive, in that no fewer than three small ledges have been provided to support Christ's cross-staff and the soldier on the right. 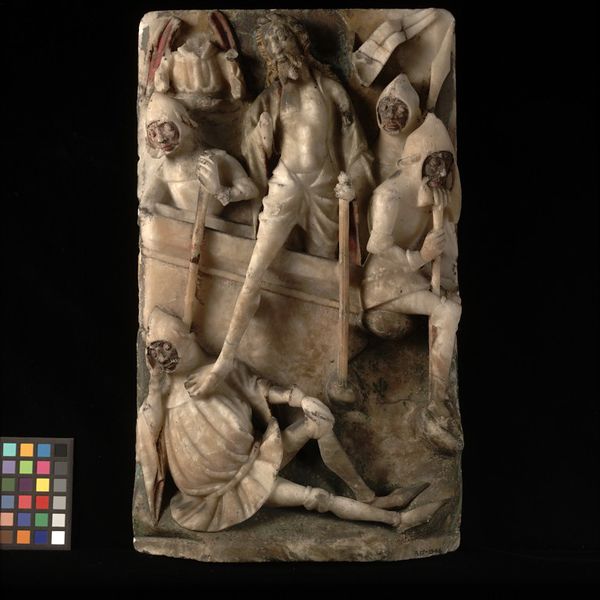