If you would like a larger file, or to use the image in other ways, contact our Licensing team.
+2
Not currently on display at the V&A

14th century-16th century (made)
In their earliest form, samplers were put together as personal reference works for embroiderers. They were trials of patterns and stitches that had been copied from others, and records of particular effects achieved that could be recreated again. They would have been the work, not of children, but of more experienced embroiderers, and, to judge from the quality of samplers like this one, of professionals too. Such stitch and pattern collections may have been assembled in any community in which embroidery for decorative effect was widely practised; our knowledge of early examples depends on the few pieces to have survived. This is one of the earliest examples in the Museum's collection, which was found in an Egyptian burial ground. 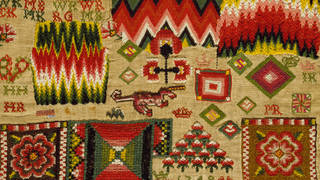 read Embroidery – a history of needlework samplers Our collection includes over 700 needlework samplers ranging from as early as the 1400s, to pieces stitched in the 20th century. They offer a fascinating insight into the practice and teaching of an important domestic craft. Find out how the social and educational significance of samplers ...
Object details