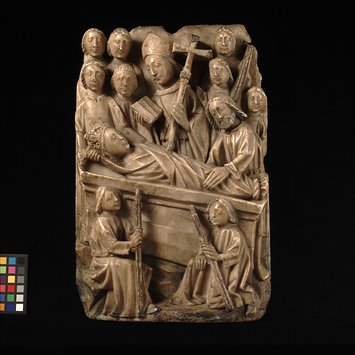 This alabaster panel represents the crowned body of a female saint, wrapped in a shroud, being lowered into a tomb. In the centre of the panel stands an archbishop, looking down to the right at the saint, and carrying an open book in his right hand and a cross staff in his left.

The saint is thought to be St Etheldreda, the foundress and abbess of a convent at Ely.

The crowned body of a female saint is being lowered into a tomb. She is wrapped in a shroud, which is bound round her feet and behind her head, leaving her head and neck bare. A man on the left of the panel supports her body with his left hand and holds the shroud behind her head with his right hand. A bearded man, wearing a short, belted tunic, stands on the right of the panel looking down at the saint, his arms supporting the lower part of her body. In the centre of the panel stands an archbishop, looking down to his right at the saint. He wears a mitre and an alb and amice with a stole crossed over his breast. He carries an open book in his right hand and a cross-staff in his left. Three figures stand on each side behind the bearers of the saint's body. One of the figures on the right of the archbishop is tonsured. Two of the figures on his left bear large candles in their left hands. In front of the tomb two figures sit on the flowered ground, each holding a large candle. Behind them, leaning against the side of the tomb, is the lid. The saint represented may well be Etheldreda.

The top edge and the right side of the panel are chipped. Traces of green paint, now darkened, remain on the ground at the bottom of the panel. Some gilding remains on the hair and stole of the archbishop, on the saint's crown, on the edges of tunics and on the belts of some of the figures. There is some dark colour on the large candles and on the hair and beard of the figure supporting the lower part of the saint's body.

The back of the panel is marked IV. There is a ridge from top to bottom indicating where two saw-cuts, one from each side of the panel, have joined. There are two lead-plugged holes with traces of latten wires. The bottom has been cut away.

Historical significance: The design of the panel is similar to those in alabaster representing the Burial of St. Catherine (though she, according to legend, was buried by angels). A painting of the entombment of St. Etheldreda is one of four scenes on an English wooden panel (1445-60) of the life of the saint, now in the collection of the Society of Antiquaries of London; all the immediate attendant figures are, however, female. The scene may also be compared with English stained glass in Leicester (1500-20) depicting the Burying of the Dead. 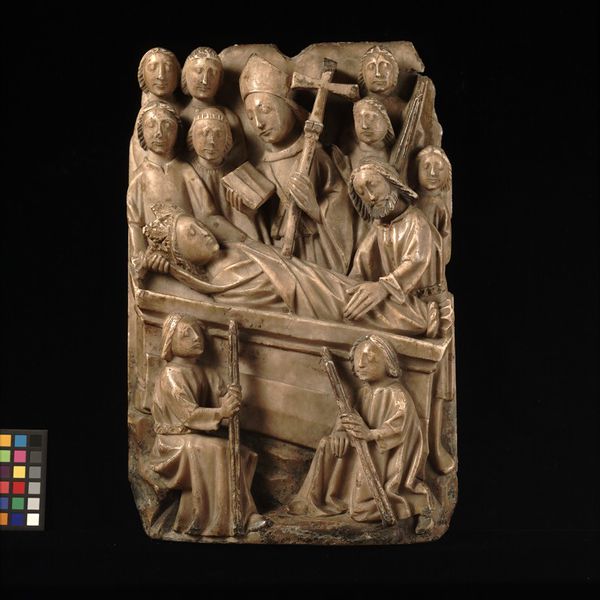