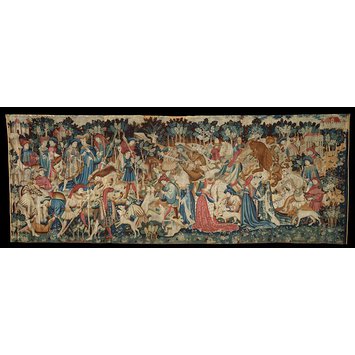 In the Middle Ages rulers and nobles were passionately fond of hunting. Here the hunting scenes are accurately portrayed but the participants wear elaborate court dress. Tapestries were often used to line a complete chamber. They provided warmth, but also an unbroken series of dramatic and colourful images.

The Boar and Bear Hunt is a slit tapestry made on a low warp loom, judging from the reversal of the inscription on a lady's sleeve - mistakes in the cartoon. The tapestry shows the hunting of the boar on the left and the bear on the right, with a startled deer in the middle. The courtiers are splendidly dressed, most of them on foot but a few mounted on horseback, and accompanied by hunting dogs. The trees and bushes of the middle ground make a forest skyline above and castles are to be seen in the distance. The tapestry is almost complete and still maintains its original height, intact on the right side (traces of the original edge), but it has been cut on the left. The colouring is predominantly blue and pink, with brown bears and boars.

'Monte le desire' or 'Moult le desire'
'Desire grows' or 'Much desire'
In reverse on the long hanging sleeve of the lady with a veil in the front.

This tapestry is the earliest of the four Devonshire hunts, which is not a set. The tapestries are the remains of three, or more likely four, different sets. They were at Hardwick Hall in Derbyshire until 1899 and may have been there since it was built in the 1590s.

Cut into strips and arbitrarily joined as curtains, these rare fifteenth century tapestries were discovered in the Long Gallery at Hardwick Hall in the late 19th century. The Duke of Devonshire sent the pieces to this Museum in 1900 for examination and reassembly, and they were sewn together as four large hangings by the Ladies' Decorative Needlework Society in Sloane Street. In need of cleaning and repair by 1950, The Deer Hunt was washed and restored, with much reweaving, in Paris. On the death of the 10th Duke of Devonshire, the tapestries were acquired for the Nation. Between 1958 and 1966 the other three pieces were cleaned and restored at a tapestry workshop in Haarlem.

Few tapestries of this size and date have survived centuries of use. It is not known where these particular tapestries were made; but so many fine tapestries of this period came from Arras that the name became synonmous with tapestry in England. The four pieces actually come from slightly different sets, as can most clearly be seen in comparing the height of the Boar and Bear Hunt and the scale of its figures with the adjacent Falconry. (Taken directly from the introductory label taken down in August 2006)]

In the late 1960s, the firm of Laura Ashley used the tapestry as the design source for a monochromatic printed cotton which was used for dresses. One such dress, in a purple-on-white print is in the Museum's collection, item number T.61:1-2008.

Historical significance: Tapestries with hunting subjects were much in favour throughout the 15th century but few have survived equivalent to the scale of the Devonshire hunts, only fragments. Their rarity lies in their early date but they are also important for their depiction of dress. The figures have the languid pose of the International Gothic style - personified by the lady to the right of the couple on the bridge, still emphasising the vertical - and fashionable costume of the courtiers in the tapestry is shown in minute detail, being the fashion of the Burgundian court of the latter half of the 1420s, of which very little survive in terms of real dress; the women in high-waisted gowns with collars wider than their shoulders and wearing heart-shaped headdresses, while the men are in bulky garments with large drooping sleeves and low-slung belts. Bagpipe sleeves seen in the tapestry went out of fashion around 1430. Patterns on silks and velvets are small and have spaced motifs, lobed and serrated flowers, and fairly extensive areas of flat background. There are examples of miniver, ermine and leopard fur. Although no really serious hunting was pursued wearing these fantastic clothes they are visible symbols of the wealth and refinement of a privileged society. A proper gentleman knew how to cut up his game without getting blood on his outfit.

Related pieces in the Burrell Collection in Glasgow show part of a Boar Hunt and a small fragment of a Bear Hunt, but in later costume. Boar and bear were usually hunted in the winter, but the trees in the tapestry are in full foliage and the flowers suggest perpetual spring. Bears would have appeared exotic to an English audience as they disappeared from England during the 14th century.
Hunting in the middle ages was more than a pastime. The elaborate rituals of the hunt were an integral part of court etiquette, and skill in hunting was regarded as the peacetime equivalent of prowess in chivalric wars. The supply of game was essential to ensure the variety of dishes necessary for the tables of the nobility.
Tapestries were easily transportable and well suited to the travelling life-style of the northern courts up to the 17th century, providing means for insulating and decorating the coldest and gloomiest castle. Tapestries would have hung from floor to ceiling and been placed edge to edge, like wallpaper in a modern room.

In the Middle Ages rulers and nobles were passionately fond of hunting. Here the hunting scenes are accurately portrayed but the participants wear elaborate court dress. Tapestries were often used to line a complete chamber. They provided warmth, but also an unbroken series of dramatic and colourful images.

Tapestry, with wool warp and weft
Made in the Southern Netherlands (now Belgium)
Formerly at Hardwick Hall, Derbyshire, the property of the Dukes of Devonshire

Probably made in Arras or Tournai