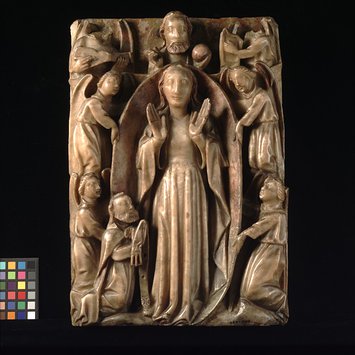 The Assumption of the Virgin

This panel in alabaster, probably made in the second half of the 15th century England, represents the Assumption of the Virgin.

The Virgin, bare-headed and wearing a gown and a cloak, stands in the centre of the panel in a mandorla held by two pairs of angels on both sides, her hands raised upwards in an attitude of prayer. Above her, in a division of the panel representing heaven, is the haloed and bearded figure of God the Father, an orb in his left hand, his right hand raised in blessing. He is flanked by two angels, the one on the left playing a lute with a plectrum, the other on the right, a small harp. On the left, at the Virgin's feet, kneels the bearded figure of St. Thomas, wearing a gown and cloak. His hands are together in prayer, holding the Virgin's belt which is shown with a buckle and clasp.

The heads of the angels in the top corners are missing. Traces of red paint and gilding remain on the mandorla and the upper background. The back of the panel bears five lines. There is a ridge from top to bottom indicating where two saw cuts have met. There are four lead-plugged holes. The bottom has been cut away.

Five diagonal lines.
On the back of the panel.

'From the Cernuschi Sale--sold to me by Mr. Murray Marks.' (Not mentioned in catalogue of the Cernuschi sale, 25-26 May 1900, Galerie Georges Petit, Paris.)
Label; On the back of the panel.

In the possession of Mr Murray Marks. Possibly from the Cernuschi Sale. Acquired by Sir Wilmot Herringham and given by him in 1925.

Historical significance: The panel is very similar to an example in the Museo Provincial de Bellas Artes, Seville. There are over seventy other recorded examples of the Assumption in English alabaster, including panels on altarpieces of the Joys of the Virgin in the Capilla de las Alas, Avilés, Spain, in the church of St. Léonard, Limoges; in the church of Sta Maria at Majori, Salerno, Italy; in the church at Montréal, Yonne; in the Chapelle Nôtre Dame du Tertre, Châtelaudren, Normandy; and in the church of Our Lady, Cara, Korcula, Yugoslavia. In the near complete alabaster altarpiece in the church at Drayton, Berkshire, there is also an Assumption panel.

Alabaster panel depicting the Assumption of the Virgin. English, second half of 15th century. 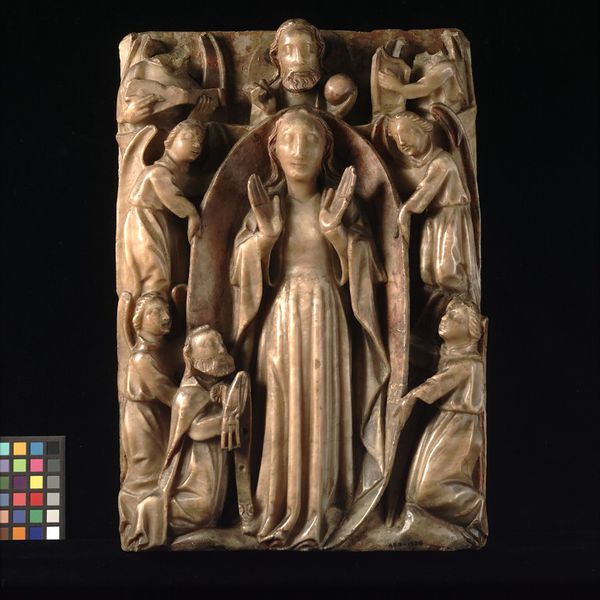