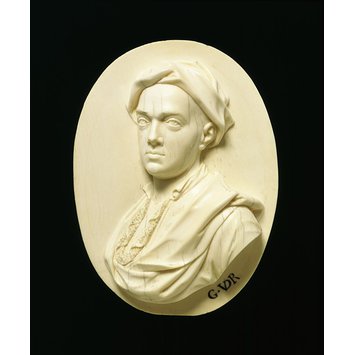 Object Type
This small oval ivory relief depicts the portrait painter Hamlet Winstanley (1694-1756), and is likely to have been a private commission from Winstanley himself. The back is inscribed 'Mr HAMLET WINSTANLEY Portrait Painter 1740'. Such a relatively small item may have been hung on a wall, placed in a cabinet, or carried around by the owner. Winstanley, after all, was an itinerant artist. Despite its small scale, the high-relief carving, as well as the observation of the subject, recall full-size portrait busts by contemporary sculptors such as John Michael Rysbrack (1694-1770).

People
Hamlet Winstanley was a notable artist-dealer, for example collecting for Edward Stanley, 11th Earl of Derby, in Italy (he later published engravings of the Earl's collection at Knowsley Hall, Lancashire). He also taught the painter George Stubbs (1724-1806). Winstanley's itinerant artistic practice in the North of England involved painting the faces of his sitters, then sending the portraits south to London to be stuck onto larger canvases, whereupon the rest of the figures were added by professional figure and drapery painters.

The initials of the ivory carver 'GVDR' are incised beneath the truncation of the left shoulder of the sitter. This artist (whose identity is uncertain) also signed in a similar way an ivory portrait relief of a boy in the British Museum, as well as another ivory, depicting John Roe, in the V&A's collection. He may be Gaspar van der Hagen, who is recorded as working with Rysbrack the sculptor, and who specialised in ivory portrait reductions after Rysbrack's full-size busts.

Materials & Making
Ivory was widely used in medieval times for small-scale sculpture, and its use was revived during the 17th and 18th centuries in particular. A relatively precious and exotic material (it derived from walrus tusks, or more commonly elephant tusks), it was used in 18th-century Britain for small portrait reliefs above all. Such reliefs might be of contemporaries, but could also be portraits of British Worthies, such as Newton, Milton, Shakespeare and Locke. Ivories were often displayed in cabinets, but they were also portable works of art, and could be carried around.

The subject is dressed informally in a soft cap and carved in unusually high relief. Inscribed in black ink on the back.

British Galleries:
Although the sitter, Hamlet Winstanley (1694-1756) was a portrait painter, he chose the form of an ivory relief for his own portrait. Such ivory portraits became more common in England after 1700. The bust type used here is based on contemporary English marble portrait busts. [27/03/2003]

Signed G.V.D.R., a carver who was probably Flemish (born in the area now Belgium) 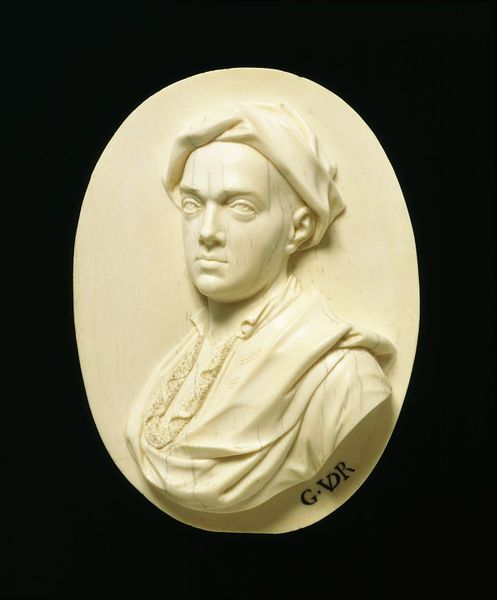