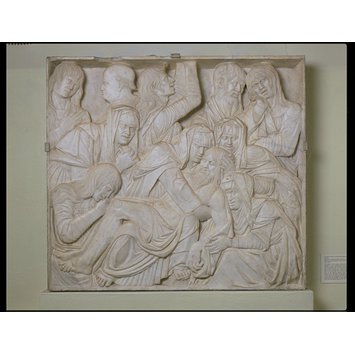 Lamentation over the dead Christ

This relief, which seems to have formed the central part of a carved altarpiece or an antependium relief, was made for the church of SS Trinità at Padua. Following the destruction of the church in 1509, the relief was moved, first to the church of San Giacomo (in 1530) and later (between 1811 and 1817) to the Lazara Palace. The tonsured figure in the rear place of the relief appears to represent the donor, who probably held the office of Prevesto della SS Trinità. A native of Padua, Bellano seems to have been a member of the studio of Donatello (active in Padua 1443-53). The carving is closely related to the relief of the Miracle of the Mule which forms part of a reliquary chest carved by Bellano for the Santo at Padua in 1469-72, and may have been produced about 1470-75.

The church was destroyed in 1509 during the siege of Padua but the altar (and benefice of the church) was transferred to the church of San Giacomo in 1530. After this church was suppressed in 1811, the relief came into the possession of Cavaliere Giovanni di Lazara and is documented in the Palazzo Lazara a San Francesco at Padua in 1817. It was acquired from there by the Milanese dealer Baslini who sold the relief to the Museum in 1878.

Marble relief of the Lamentation Over the Dead Christ. In the foreground Christ is shown lying on the lap of the Virgin Mary, whose right arm passes over his body. Mary Magdalene appears in the lower left corner kissing Christ's right hand. Other holy women are shown in the lower right corner, and to either side of the Virgin. The back row of five male figures includes a youthful man (perhaps St John the Evangelist) whose raised arms cut through the frame of the relief. The older man shown second from left, in left profile, may be the donor of the piece.

This relief was made for the altar in the church of the SS Trinità in Padua, and perhaps formed the central section of a carved altarpiece. It is unlikely to have been part of an antependium, as suggested in some of the literature. As the display at the Henry Moore Institute in Leeds (2004) showed, the perspective is much more successful when the relief is shown at around waist height.

The church was destroyed in 1509 during the siege of Padua, but the altar (and benefice of the church) was transferred to the church of San Giacomo in 1530. After this church was suppressed in 1811, the relief came into the possession of Cavaliere Giovanni di Lazara and is documented in the Palazzo Lazara a San Francesco at Padua in 1817. It was acquired from there by the Milanese dealer Baslini who sold the relief to the Museum in 1878.

On acquisition, the relief was ascribed to the school of Donatello. J. C. Robinson suggested two years later that this attribution should be removed from the Museum register. Semrau was the first to suggest, in 1891, that the relief may have a connection to Bellano; this attribution has since been widely accepted.

Vasari mentions that Bellano, a native of Padua, worked for Donatello during the latter's stay in the city (1443-53). Bellano is later mentioned in documents of October 1456 relating to payment for Donatello's statue of Judith slaying Holofernes (Florence, Palazzo Vecchio), and probably worked with him on the pulpit reliefs for San Lorenzo, Florence, from 1463 until Donatello's death in 1466.

Bellano was much influenced by Donatello, as can be seen in the rough, expressive figures (particularly faces) in the present relief. The densely-packed plane and emotive figures of Donatello's stone Entombment, on the back of the altar in Sant' Antonio in Padua, may be the most direct influence on Bellano's Lamentation.

This relief shows the lamentation, in which a group of mourners (including the Virgin Mary, Mary Magdalene, and St John the Evangelist) are shown grieving over the dead body of Christ. This subject, first depicted in western art in the thirteenth century, was not mentioned in detail in the gospels. The main textual sources for the lamentation are the apocryphal Gospel of Nicodemus and the Meditationes Vitae Christi, attributed to St Bonaventure (1221–74). It was often included in cycles showing Christ’s Passion, and sometimes overlaps with other episodes such as the deposition or entombment. Because the altar was originally associated with the tomb of Christ, the lamentation was a particularly appropriate subject for an altarpiece. The present relief probably formed the central part of a carved altarpiece, perhaps with other episodes from the Passion on either side.

This relief shows Christ lying on the lap of the Virgin, with Mary Magdalene kissing his right hand and other holy women holding his head and left arm. Male figures line the back row; the unusual figure with arms thrust through the upper border of the relief is perhaps St John the Evangelist. The tonsured figure standing second from left may have been the donor who commissioned the relief, who perhaps held the office of Prevosto della SS Trinità in the church in which it was originally housed.

Contemplation of images of the Lamentation or Pietà (pity) was meant to instil sorrow and remorse, so bringing the viewer closer to God. This relief comes from a church in Padua. Bellano was probably a member of Donatello’s workshop when the Florentine sculptor lived there in 1443–53. The fi gure with
the tonsured head at the top is perhaps the donor.

The treatment of relief and emotional expression of this piece recall the work of Donatello (which can be seen in Rooms 18 and 19). Bellano was probably a member of Donatello's workshop when the Florentine sculptor was working in Padua in 1443-53. This relief comes from a church in Padua. The figure was the tonsured head is probably the donor. 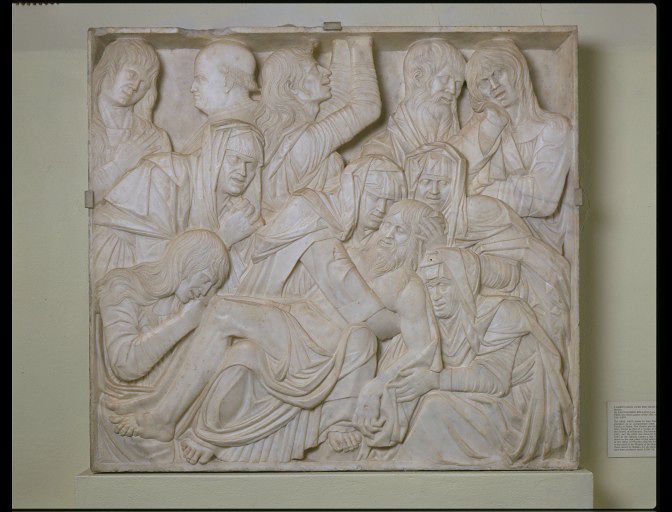