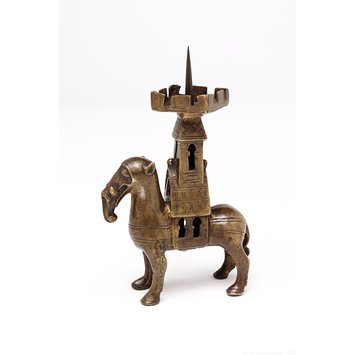 This candlestick highlights a fashion in the 12th and 13th centuries for designs of beasts and monsters on domestic objects. The Elephant and Castle represented here was an exotic motif inspired by the use of elephants in Eastern warfare. Towers were placed upon the backs of the elephants from which soldiers could fire arrows or throw missiles. Elephants were a source of great fascination in medieval Europe because they were little known. In England only the King owned an elephant in his menagerie at the Tower of London.

Bronze pricket candlestick in the shape of an elephant and castle. The small elephant stands in a stationary position with its head straight and its tail between its legs. A small trunk, short tusks and small ears are are depicted, which identify the beast as an elephant. The castle tower is fixed around the waist of the elephant. It has two tiers with windows on both sides. The pricket stands upon the upper tower of the castle. The edge of the tray beneath the pricket, used to catch the wax, is crenellated.

Elephants fascinated the medieval West because of their exoticism and novelty. In England only the King owned an elephant in his menagerie at the Tower of London. Based on their behaviour, Elephants came to signifiy chastity and piety (it was believed that every new moon they cleansed themselves), yet they were also seen as monstrous and deformed owing to their use in warfare and their appearance.

The elephant and castle was a popular motif in the middle ages. Elephants were used in the East in warfare. Structures ("castles") were fixed upon the back of the elephant from which soldiers could fire arrows or hurl weapons. This exotic image became popular in medieval Europe and was adapted into western culture. The British Library manuscript Burney 216 from the 12th century depicts a marginal drawing of an elephant and castle on folio 33. The sketch, describing King Pyrrhus' battle elephants in Orosius' Historiarum Adversum Paganos depicts the exotic elephant with western armed soldiers in the "castle" on its back. This candlestick, although missing the connotations of war, also demonstrates how the west interpreted this eastern theme. The castle upon the elephant's back is crenellated and tiered in the style of western fortifications whilst the elephant represents the exotic.

It is the popular belief that the term "Elephant and Castle" is a corruption of "Infanta de Castilla", the title of the Spanish princesses in Castile, although this is by no means certain.

Historical significance: This object is made from base metal, which was a robust and popular material for candlesticks in the medieval period. Its pricket demonstrates how the medieval candlestick functioned; candle holders or sockets did not come into use until the 13th century. The design of this candlestick is in keeping with a fashion at this time for shaping candlesticks in the form of animals. The elephant and castle however, is a representation that can be found in many different artistic media, from ivory chess pieces to manuscript illuminations.

Medieval candlesticks were used both in the home and during religious ceremony to provide light. The candle was secured to its holder using a pricket or spike to impale the candle and hold it in place. Candlesticks were most commonly made from base metals during this period.

Bronze candlestick in the shape of an elephant and castle, Germany, 13th-14th century.

CANDLESTICK
In the form of a grotesque monster
Brass
Flemish; 13th century [] 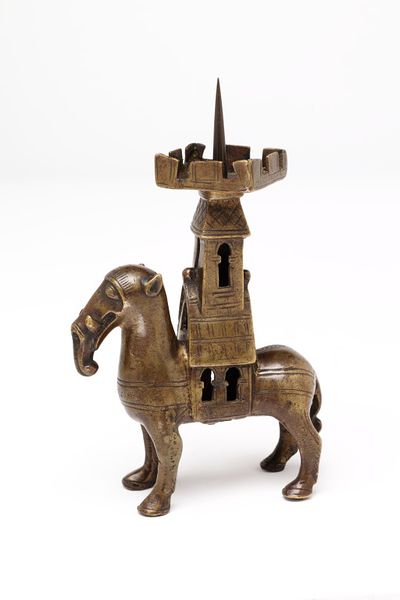