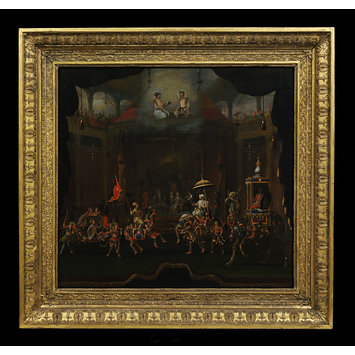 In this enigmatic painting by the Dutch artist Willem Schellinks (1627-1678), nothing is as it seems at first sight. The scene appears to depict a tableau on a stage framed by heavy curtains. A potentate with female companions and servants watches the procession of men in Mughal dress pass by in front of him, as do figures on high balconies at right and left. However, the painting actually depicts a curtain on which the entire scene is painted: its border of gold fringing is visible in the foreground.

The subject is equally mysterious. Although previously identified as the sons of the Mughal emperor Shah Jahan in procession, this is not certain. That they are Mughal princes or rulers is clear from their costume and emblems of royalty, but their precise identification remains to be confirmed. One is carried on a palanquin composed of female figures; the other three ride animals that are also composed of entwined human figures, though the legs of the composite camel at right are composites of animals.

Above the potentate whose royalty is indicated by the shade held by a servant behind him, two figures hover in clouds: they may be identified as Shah Jahan’s father, Jahangir, on the left, and his grandfather Akbar on the right. It is possible that the figure in white holding a hawk is intended to be Shah Jahan. No plausible identification has been made for the orange-robed figure holding a large shield and carried on a camel inside a howdah.

Oil on canvas depicting an imaginary scene of Shah Jahan and his four sons in a parade. Above, his father Jahangir and grandfather Akbar sit on clouds, gilt wooden frame.

Historical significance: Willem Schellinks 1627-1678
Professor Gary Schwartz has pointed out that the V&A painting, and a related painting in the Musee Guimet in Paris also by Schellinks, contain references to Mughal drawings that Rembrandt also copied. He therefore concludes that Schillinks and Rembrandt looked at the drawings together.

Imaginary scene said to depict a parade of the sons of Shah Jahan on composite horses and elephants, with Jahangir and Akbar on clouds above them, by Willem Schellinks, oil on canvas, late 17 century, Netherlands.

Oil Painting. Represents a royal "tamasha" at the Court of Delhi. In the background is the Emperor with his Court. Groups of women, in the foreground, are twined into the shapes of a camel, an elephant, a horse, and a palanquin. Above is shown the apotheosis of a former Emperor. Probably English. End of 18th century. [1892] 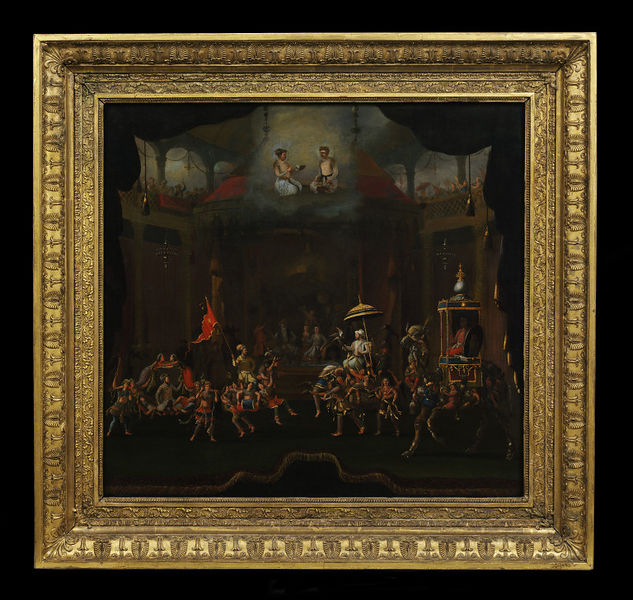