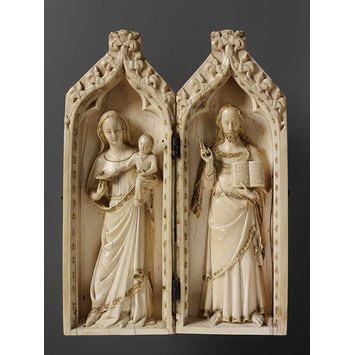 This diptych, named after the person who donated it to the Museum (George Salting), is one of the comparatively rare Gothic ivories to be unequivocally accepted as English (probably Westminster). Thicker than any existing French ivory relief - each leaf measures 2.6cm in depth - the style of the figures of Christ and of the Virgin and Child has traditionally been associated with late 13th and early 14th century work at Westminster and with the Eleanor Crosses erected in the early 1290s to commemorate the death of Eleanor of Castile, wife of Edward I. There are also parallels with slightly later sculptures, such as the Percy tomb at Beverley (about 1330-1340).

The use of the ogee arch and the unusual, monumental form of the individual figures - as opposed to the smaller and more crowded scenes from the Gospels found on French ivories - reinforce the idea that this was produced in England, probably in a court workshop. In effect, the figures have the appearance of small free-standing statues enclosed within niches, or of three-dimensional Northern versions of the full-length figures found in Italian 14th-century painted predella panels.

Since the end of the nineteenth century, the Salting Diptych has been recognised as probably the grandest English Gothic ivory carving to survive.

Diptych, carved from ivory, with the Virgin and Child and Christ Blessing. The Christ-Child is holding an apple in his left hand, and reaching toward the flower held in the Virgin's right hand. The blessing Christ holds in his left an open book, with text inscribed. The figures are carved in high relief and each stands within a deep niche below trefoil ogee arches with foliate crockets . The two parts are held together by two small hinges. The latter and probably the clasp on the outer edge are not original; the hinges replace three earlier hinges, the position of which are indicated by later ivory insertions and the remains of pinholes along the inner edge of each leaf. The gilded decoration of the hair, beard, borders of draperies, and small rosettes of the frame is not original but overlays a similar scheme, thus giving an accurate impression of the original appearance.

The diptych was formerly in the collections of Francis Douce (1757-1834), London, as possibly to be identified with the 'fine ivory diptych' seen by him in the collection of Sir Joseph Banks, Soho Square in 1814 and acquired the following year from a man named Smith (Oxford, Bodleian Library, MS Douce e. 67, fol. 22); it then passed with the Doucean Museum to Sir Samuel Rush Meyrick, Goodrich Court, Hertfordshire, by 1836; by 1890 in the collection of Frédéric Spitzer, Paris; bought by George Salting, London, at the Spitzer sale, Paris, 17 April 1893 (lot 145); Salting Bequest to the Museum in 1910 (no. 1158).

Historical significance: This diptych, known as the Salting Diptych, is, along with Grandisson triptych in the British Museum, among the most celebrated English Gothic ivory carvings.Comparisons have been drwan between the style of the figures and that of the sculptures of the Eleanor cross and royal tombs in Westminster Abbey of the early 1290s, and parallels made with the sculpture and paintings of the Westminster Abbey sedilia of about 1308.

The uniqueness of the present diptych, both in type and facture (it is probably the thickest ivory relief from the Gothic period), suggests strongly that it was a special commission, made as a precious object of private devotion for an important patron close to the court circle. When closed, the diptych forms a compact - if solid -shape and would fit neatly into a leather carrying case for safe travel.

Diptych, ivory, 'The Salting Diptych', with the Virgin and Child and Christ Blessing, English, probably made in Westminster, ca. 1310-1320 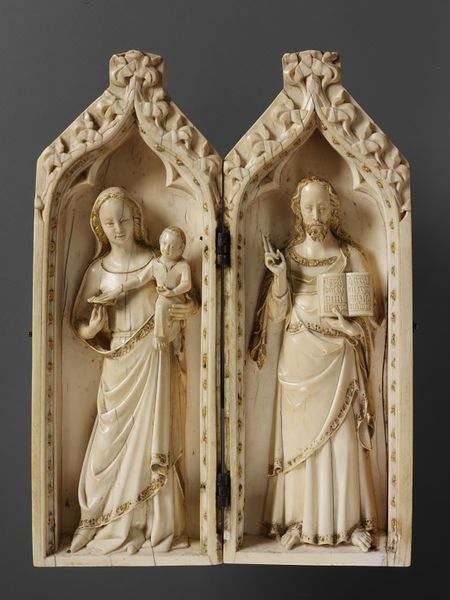