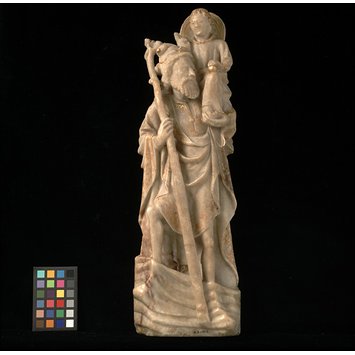 There are two sorts of alabaster. Calcite alabaster is very hard and was used in ancient times. This object is made of gypsum alabaster which is a fine-grained, soft and smooth stone. Although at first glance it looks a little like marble, which it was intended to imitate, it was much easier to carve due to its softness, and alabaster objects were therefore significantly cheaper to produce. It probably originated in the large deposits found in Britain, in the Midlands, which were extensively worked from the 14th century.
England was a major centre for the production of objects such as this one. During period, they were exported in very large numbers to Europe where they survive, unlike many examples which remained in England and were destroyed or greatly damaged during the Reformation. This particular object depicts a Saint.

Saints are the heroes and heroines of Christian faith. In the 14th and 15th centuries, they were a popular subject for alabaster carvings. Religious themes penetrated private life, so devotional images of saints were sculpted not only for church interiors, but also for individuals to contemplate within the privacy of their homes. Christopher was a giant of superhuman strength who carried Christ across a difficult river. He became the patron saint of travellers and was invoked against plagues, sudden death, water and storms. This carving may be a figure from an altarpiece, or alternatively a single devotional piece for a wealthy household.

The bearded saint, looking to his left, wades through water, his right foot raised. On his left shoulder he bears the haloed Christ Child, who wears a belted gown and looks down at him, blessing him with his right hand. In his left hand the Child holds a orb, resting it on his knee. The saint holds a staff in front of him in his right hand and supports the Child's left foot in his left hand. The saint wears a short Phrygian cap with an upturned brim. Over his tunic he wears a cloak, which is draped from his right shoulder leaving his legs uncovered.

There is some ornate gilding on the figure which looks modern. There are two large holes in the back of the figure. Two smaller ones are plugged with lead. The back is marked with an inverted V and two sloping parallel lines.

An inverted V and two sloping parallel lines.
On the back of the figure.

Purchased from R. Langton Douglas in 1912.

Historical significance: Other single figures include those in the collection of De Maeyer-Buyle, Antwerp, the Marienkirche, Gdansk, the Burrell Collection, Glasgow, the University of Michigan Museum of Art, the Princeton University Museum, New Jersey, and the Musée des Antiquités, Rouen. A headless figure of St. Christopher is in the St. Peter Hungate Church Museum, Norwich. There is a representation of the saint on the alabaster tomb of William, Lord Lovell (d. 1430) in the church at Minster Lovell, Oxfordshire. There is a powerful but coarse woodcut of Swiss or Swabian origin (1470-80) which is a typical contemporary printed image of this subject. Many late medieval prints of the saint survive. There is an English stained-glass figure of the saint (1500-20) in the Leicester Museums collections. This immensely popular saint was also commonly found on wall paintings in English medieval churches, for example in the chapel of Haddon Hall, Derbyshire, where his image doubtless reassured the anxious traveller. 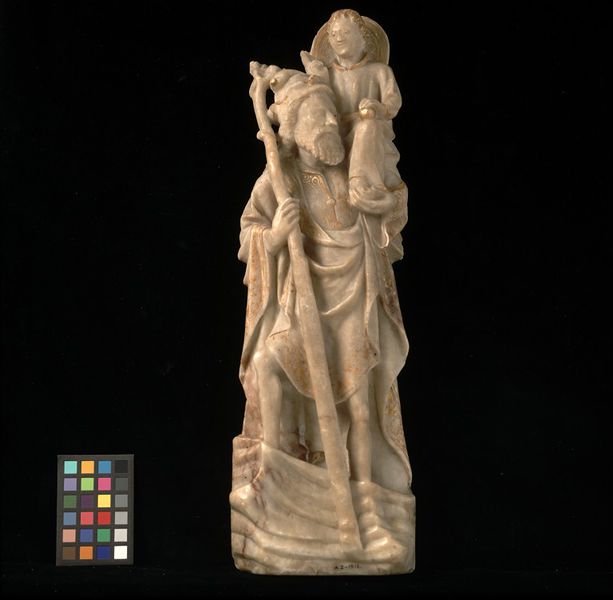