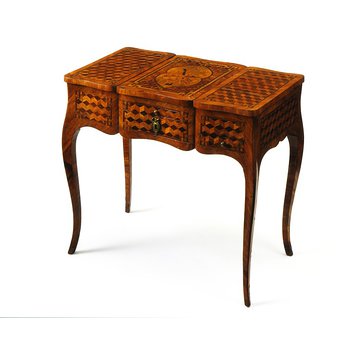 The cabinetmaker Jacques Bircklé (1734-1803) produced this dressing-table in Paris about 1770-1780. There was an intricate code of social etiquette in 18th century polite society. This involved dressing appropriately for a particular social occasion and applying make-up. Make-up could be very elaborate. A table such as this would have held most cosmetic accessories.

Lord Stuart de Rothesay (1779-1845) purchased this dressing-table between about 1828 and 1840. He had been British ambassador in Paris and became a keen collector of French 18th century furniture. He used many of his purchases to furnish a country house, Highcliffe Castle, which he built on the south coast of England, near Bournemouth. This table has been repaired and altered, probably at the time he bought it.

Dressing table, veneered in tulipwood and other exotic woods forming panels of cube marquetry with a central panel incorporating a trophy of musical instruments, on a carcase of oak and pine, by Jacques Bircklé (1734-1803, m. 1764). Substantially rebuilt in the 1830s or 1840s, possibly by James Nixon, Great Portland Street. The table is raised on four square-sectioned cabriole legs, veneered with diagonally-set tulipwood, showing much replacement at the feet, suggesting the masking of original fixing marks for sabots. The body of the table, serpentine on the lower edge on all sides, is veneered with diagonally-set tulipwood outlining the marquetry panels. In plan the table is serpentine along the front, but the sides and back are flat, although the top edge of the sides has a slight curvature into the point under the top. The carcase is of oak and pine, and shows much evidence of repair and alteration. The front rail and the legs are of oak but the sides and back rail are of pine. The underside of the table shows two heavily chamfered oak panels with the grain running across the piece. The front and back show three panels of cube marquetry, the sides single panels, each panel outlined with stringing with in-turned Greek key corners. On the front the marquetry is treated sans traverse: in the centre section there is a single drawer in the lower half, lined with oak jointed with large dovetails and set in the front with a lacquered brass keyhole escutcheon with laurel swags around an oval; above is a writing slide with a single brass knob, the surface of green leather (19th century, showing no tooling) framed with a banding of palissander. The front of the drawer appears to be slabbed on to the straight box front of the drawer, and this is possibly the result of some adaptation. The lock is of steel, attached with what appear to be tin-tacks. Blocks within the carcase show that this drawer is conspicuously less deep than the carcase. On the right there is a lower drawer lined with oak, dovetailed and set at the front with divisions into three square compartments, the one on the right fitted with a brass box with hinged, pierced lid.

The top shows three panels of cube marquetry with borders of complicated Greek key stringing. The centre panel is set 'in pretence' with a panel of a trophy of musical instruments set against a green-stained ground. All the marquetry shows signs of re-staining and re-inking.The two outer sections of the top hinge outwards, each revealing a sunken lid to a well, the inner lids hinging at the back. The inside of the outer flaps and the outer surfaces of the inner wells are veneered with diagonally-set panels of rouge satiné within palissander bandings with box stringing. On the front of each is fixed a red leather lifting tab. The underside of the right hand lid is lined with green leather and edged with a stamped leather braid. The compartment on the right is lined with a veneer of rouge satiné. On the left-hand side the entire inner compartment can be lifted out as a box, the oak carcase of dovetailed construction, the base entirely set within the sides. The interior is lined in the top two-third (suggesting a lost box for the bottom) with a blue paper edged with leather braid. The underside of the lid is lined with heavily padded blue taffeta, outlined with metal thread lace. The taffeta shows the old imprints of three circular lids of different sizes. The centre section of the dressing table hinges at the back and slides forward so that the underside can present at a useful angle a dressing mirror. The mirror is affixed to the underside of the panel with a thick half-round moulding, a later addition.

Veneered in tulipwood and other exotic woods to form panels of cube marquetry, on a carcase of oak and pine

Part of a large group of pieces of French furniture, ceramics, metalwork, books and other decorative arts, from the late Empire period and earlier, acquired in Paris by Sir Charles Stuart (from 1828 1st Lord Stuart de Rothesay) (1779-1845).The Empire furnishings were probably purchased during his first period as ambassador to Paris (1815-1824), the earlier furnishings during his second embassy (1828-1830). The Empire furnishings may have been intended for 4 Carlton House Terrace which he acquired in the late 1820s and moved iinto in 1834. Older pieces were probably purchased for his country house, Highcliffe Castle, Hampshire (now Dorset), which was re-modelled and enlarged in the most ambitious Gothic style from 1830-1834, with some work continuing throughout the 1830s. In 1841 the Carlton Terrace House was let. The family moved their London residence to Whitehall Yard. It was possibly in 1841 (or 1845, the date of Lord Stuart de Rothesay's death) that the Empire furnishings were moved to Highcliffe.
Lord Stuart de Rothesay's collections were inherited in 1845 by his wife Elisabeth, Lady Stuart de Rothesay (née Yorke). After her death, Highcliffe House and its contents passed to his second daughter, Louisa, Lady Waterford (1818-1891) who maintained Highcliffe. She left the house and its collections to her distant cousin, Major-General Edward Stuart Wortley (1857-1934). When his younger daughter Elizabeth ('Bettine') married Montagu Bertie, 8th Earl of Abingdon in 1928, he bought the castle and its contents from his father-in-law. The Abingdons sold Highcliffe and most of its contents in 1949 but retaineda number of pieces, including all those which later formed the Hole Bequest to the V&A. After her husband's death in 1963, Lady Abingdon lived much of the time with her close friends, Mr and Mrs Tahu Hole, to whom she bequeathed all her personal possessions on her death in 1978. Tahu Hole died in 1985 and a year later his widow Joyce approached the Museum and offered the collection as a bequest. She died in December 1986 and, in accordance with her will, the Museum chose those items that it wished to add to its collections. Other items from the collection were sold to benefit the Museum and the proceeds added to the funds bequeathed.

This dressing table must have been made early in Bircklé's career, following the full cabriole shape of the mid-century. Similar marquetry, of a trophy of musical instruments against a cube backgound, is shown on one of his commodes. In the 1942 Country Life photographs it appears in the Drawing-Room, used as a centre table. It was lot 29 in the 1949 sale but was bought in. It was listed there in the Drawing-Room, together with W.14-1987.

The piece has undergone considerable later alterations, most probably in the early 19th century by James Nixon.

Historical significance: Jacques Bircklé (1734-1803) worked in the rue Charenton and the rue Saint-Nicolas producing large numbers of pieces of medium and high quality. The workshop was carried on until 1835 by his son. Nearly 20 years after obtaining his maîtrise in 1764, Bircklé began to supply pieces to the Queen for Saint-Cloud and to other members of the royal family. Indeed most of his known work is in the Transitional or Louis XVI style. He was noted for his sparing use of metal mounts.

With alterations, possibly by James Nixon in the 1830's

Attribution note: REPAIRS AND
ALTERATIONS: The table has clearly undergone one major overhaul and the replacement hinges on the side flaps and other details suggest that this may have been done in the 1830s and 1840s, possibly by James Nixon. 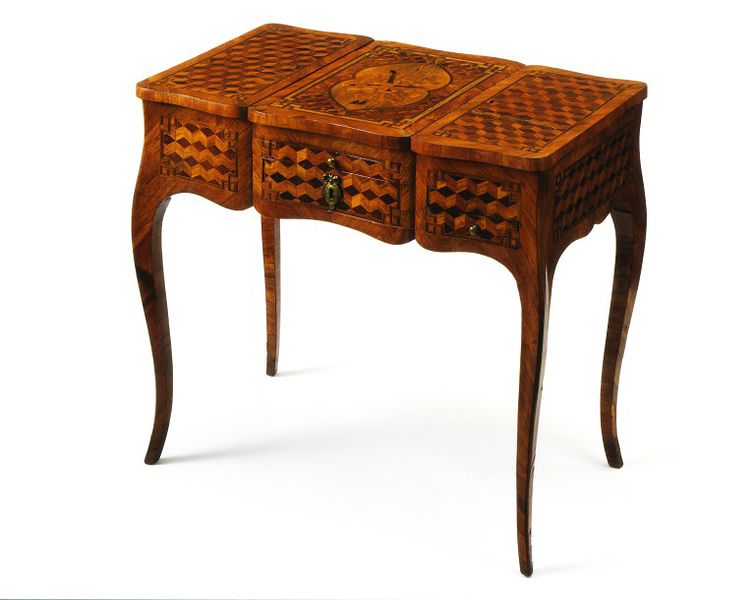