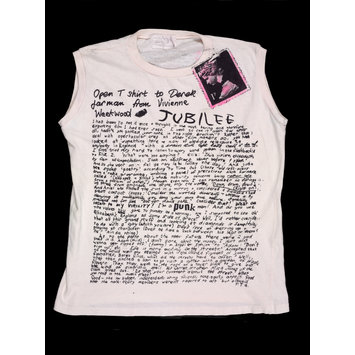 White sleeveless top with text on front and back, Union Jack flag on back.

'Open T shirt to Derek Jarman from Vivienne Westwood Jubilee I had been to see it once and thought it the most boring and therefore disgusting film I had ever seen. I went to see it again for afterall, hadn't you pointed your nose in the right direction? Rather than I deal with spectacular crap as other film makers do, you had looked at something here & now of absolute relevance to anybody in England with a brain still left let's call it soul. I first tried very hard to listen to every word spoken in the flashbacks to Eliz. I. What were you saying? Eliz: 'This vision exceedeth by far all expectation. Such an abstract never before I spied.' And so she went on - fal de ray la lu lullay the day! And John Dee spoke 'poetry' according to Time Out (those old left overs from a radio programme, involving a panel of precocious Sixth formers, called "Cabbages & Kings", whose maturity concerns being rather left from a position of safety) though even now I can remember no distinguishing phrase from amongst the drone, only the words, 'Down down down' (Right on)! And Ariel who flashed the sun in a mirror, & considered a diamond & had great contact lenses: 'Consider the world's diversity & worship it. By denying its multiplicity you deny your own true nature. Equality prevails not for god but for man's sake.' Consider that! What an insult to my VIRILITY! I am punk man! And as you use the valves you give to punks as a warning, am I supposed to see old Elizabeth's england as some state of grace? Well, I'd rather consider that all this grand stuff and looking at diamonds is something to do with a gay (which you are) boy's love of dressing up & playing at charades. (Does he have a cock between his legs or doesn't he? Kinda thing)

As to the parts about the near future there were 2 good lines in it. Adam (kid): I don't care about the money I just don't wanna get ripped off.' (Funny) & Angel or Sphinx to Adam: 'Don't sign up', etc...Life is more exciting on the streets.' Accepted that no one would want any dealings with clichéd figment of your fantasies, Borgia Ginze, what did the streets have to offer? Well, they then pinched a car to go visit a nutter with a garden of plastic flowers. They then went to the roof of a tower block to give out the kind of simplistic speil Alf Garnet, or rather Mick Jones of the clash gives out. Is that your comment about the street? What Good - the low budget, independent, using friends, none-equity aspect. Good that the none-equity members weren't required to act but allowed P.T.O.'
Decoration; English; Front

'to say their lines as if reading from a little book inside their head, because what happened by result of this acting, as against none acting ability was that the performances depended for strength upon how much humanity the people behind the role posessed. Thus Jordan & Helen were good whereas Jenny Runacre's mediocrity of spirit bludgeoned through. Albeit - these aspects of your approach & style were anarchical, I am not interested in however interestingly you say nothing. [The Rule Britania Eurovision Song Contest was good because you said something - nationalism is vile & Eliz II is a commercial con trick]. Just like E.I.

An anarchist must say, 'Trust yourself'. It's the place to start. But self-indulgence is not the answer. You have to be brave & you are only a little. You have to cut the crap & not the cheese & chuck out - UGH - for instance, those Christian crucifixion fixations (sex is not frightening, honest) - "the pervasive reek of perverse & esoteric artinesss, the delight in degradation & decay simply for its beauties when stylized. An irresponsible movie. Don't remember punk this way" (all quoted from Chris Brazier in M. Maker)

But I ain't insecure enough, nor enough of a voyeur to get off watching a gay boy jerk off through the titillation of his masochistic tremblings. You pointed your nose in the right direction thaen you wanted. It was even more boring than Uncle Tom Don Letts' even lower budget film.

Gender and Sexuality; The Michael and Gerlinde Costiff Costume Collection 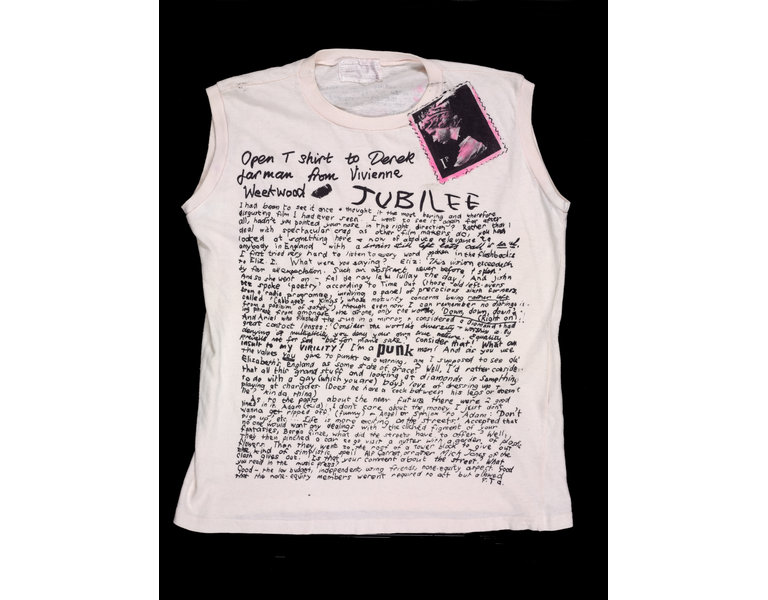