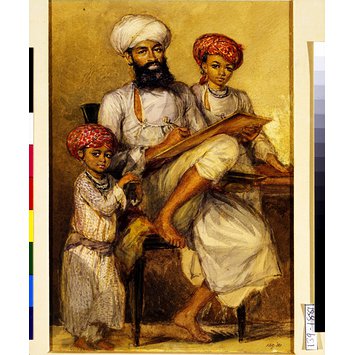 William Carpenter was the eldest son of the distinguished portrait painter Margaret Sarah Carpenter and of William Hookham Carpenter, who became Keeper of the Prints and Drawings Department at the British Museum. In early 1850 he set off in the footsteps of his younger brother Percy, also an artist, and landed in Bombay. He spent much of his time painting portraits of local rulers and the surrounding countryside, often wearing Indian dress himself. He travelled widely, from Sri Lanka in the south to Kashmir in the north, and he also spent some time in the Punjab and Afghanistan before moving south to Rajasthan. He appears to have returned to England in 1856. Ten years later he was living in Boston, USA, but he later returned to London, where he died in 1899. This picture depicts Tara Chand, who was court painter to the Maharana Sarup Singh of Udaipur. He is seated on a chair, with his two young children either side, and is supporting a drawing board on his right knee. He may well be making a sketch of Carpenter while the latter is engaged in painting his portrait.

A painting depicting Tara Chand, the Court Painter at Udaipur. A seated bearded man wearing a turban and traditional Indian dress resting a drawing board on his knee. His two children, also in traditional dress, are standing next to him.

William Carpenter was trained at the Royal Academy Schools, and was the eldest son of the distinguished portrait painter Margaret Sarah Carpenter and William Hookham Carpenter, who became Keeper of the Prints and Drawings Department at the British Museum.

He was in India from 1850 t0 1856, during which time he travelled extensively from Bombay (Mumbai) and across western India to Rajasthan, Delhi, Kashmir, Lahore and Afghanistan. His depiction of every day street scenes and groups of people is remarkably accurate and animated, his portraits vividly capturing the character of his sitters and the glowing effects of sunlight as cityscapes and architectural monuments. Brilliantly executed in a range of warm colours, his watercolours evoke a gentle romanticism.

After his return to England, The Illustrated London News published some of his watercolours. In 1881, he exhibited 275 of his paintings in a one-man show in the South Kensington Museum, London. This entire collection was subsequently acquired by the V&A.

Tara Chand, court painter to the Maharana Sarup Singh of Udaipur is seen here with his two young children on either side. [1/12/2008] 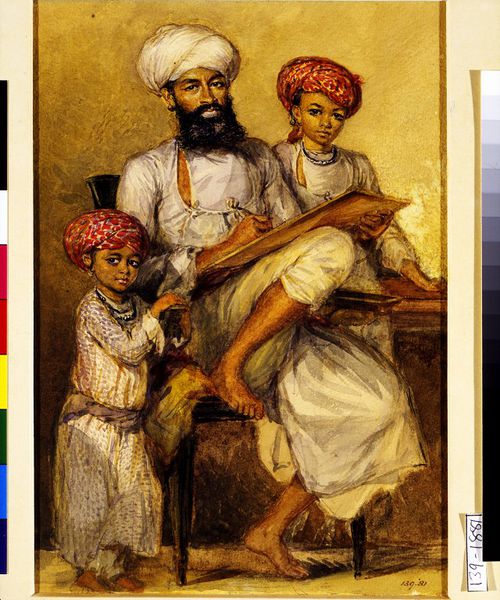