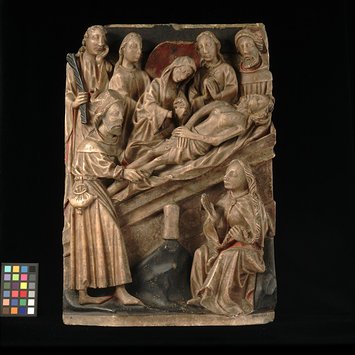 This panel in alabaster in high relief is made by an unknown artist in the 15th century in England.

The panel is remarkable in that the design is a mirror image of the ususal treatment of the Entombment. There are at least five other recorded English alabaster panels of the subject with a reversed design, including one which is part of a Passion altarpiece in the Museo Schifanoia, Ferrara.

Alabaster panel depicting the Entombment. The dead Christ, bearded and wearing the torse, is represented lying on the tomb with his head to the right of the panel and his hands crossed. He is being wrapped in a shroud by Joseph of Arimathaea, who stands by his feet in front of the tomb on the left of the panel. He is bearded and wears a bag-crowned hat, a tippet and a belted gown with the tasselled purse that identifies him. The three nails of the Crucifixion are to be seen in the top of the purse. The Virgin Mary, haloed and veiled, stands between the bareheaded figures of Mary Salome and Mary Cleophas in the centre of the panel behind the tomb; she leans over the body of Christ, her hands clasped together. The beardless figure of St. John the Evangelist, holding a palm in his right hand and resting his chin on his left hand in an attitude of sorrow, is represented in the top left corner. Nicodemus, bearded and wearing a bag-crowned hat, a tippet and a hood, stands in the top right corner. Both men look down at the body of Christ. The cross stands at the top of the panel. Mary Magdalene, wearing a cloak fastened with a brooch, is seated in front of the tomb. In her left hand she holds the long hair by which she is identified; her right hand is raised. Her emblem, the ointment pot, stands on a raised piece of ground in front of her.

The top left corner of the panel is missing. There is a diagonal break across the middle of the panel. The right hand of the Virgin is missing, and her halo is chipped.

Green paint (most of which appears to have been overpainted with black) and the usual daisy pattern remain on the ground at the bottom of the panel. There are traces of gilding on the hair of the figures and on the upper background. The Virgin's halo is red decorated with white. There are traces of red in the folds of the garments of the figures. The tomb is painted light brown with three lighter circular apertures on the side. The cross and St. John's palm have been painted black, which appears to be modern.

There are four lead-plugged holes in the back of the panel, one with latten wires attached. There are a number of marks and seven parallel lines. The bottom has been cut away.

Historical significance: The panel is remarkable in that the design is a mirror image of the ususal treatment of the Entombment. There are at least five other recorded English alabaster panels of the subject with a reversed design, including one which is part of a Passion altarpiece in the Museo Schifanoia, Ferrara. 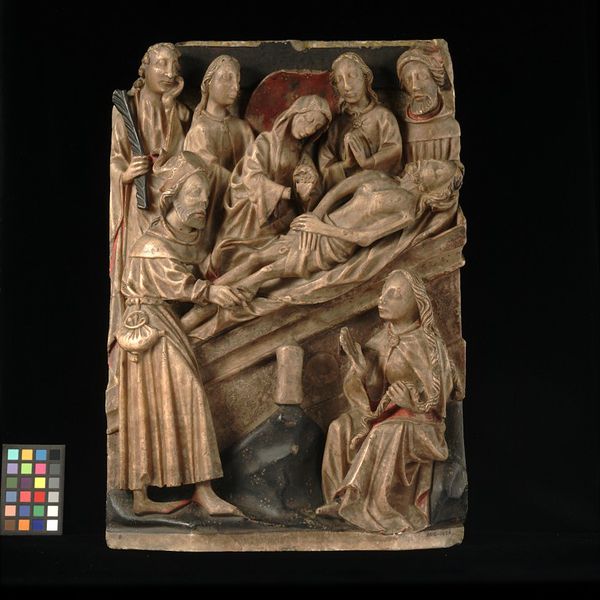