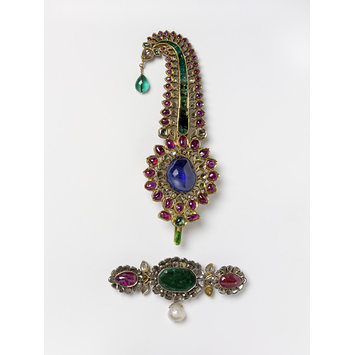 These turban jewels , made and intended to be worn together, were presented to Admiral Charles Watson (1714-1757) by the Nawab of Bengal on 26 July 1757, following the battle of Plassey. They were inherited by the Townley family, relatives of the Admiral, following his death in India shortly after the battle, and remained in their possession until sold at auction in London in 1982, when they were bought by the V&A. They are a rare example of securely datable 18th century Indian jewels.
When the British East India Company felt their trading interests in India to be threatened by Siraj ad-Daula, the Nawab of Bengal, they decided to depose him in favour of a ruler who would be more amenable to their interests. This led to the campaign that culminated in the famous Battle of Plassey, during which Robert Clive (1725-1774) led the land forces and Admiral Watson commanded the fleet. The British victory allowed them to install as Nawab Mir Ja'far, who then presented lavish gifts to Clive and to Watson, including these jewels. The style of the pieces, which have backs enamelled in translucent green and red over a white ground, and jewelled fronts, is within the Mughal tradition found all over the northern provinces of the subcontinent. The specific form, however, is typical of Bengal and, particularly, of its capital Murshidabad. The style is seen in contemporary paintings of Murshidabad, and it is probable that the jewels were taken from the treasury rather than being made especially for presentation by Mir Ja'far.

Gold, set with diamonds, rubies, a sapphire, Colombian emeralds and a pearl

These jewels were presented to Admiral Charles Watson by the Nawab of Bengal on 26 July.1757, following the battle of Plassey. They remained in the possession of the Townley family, the descendants of the Admiral, until 1982 when the Museum bought them at auction.

Style typical of jewellery worn at the court of Murshidabad in the 18th century.

Style typical of jewellery worn at court in Murshidabad during 18th century. 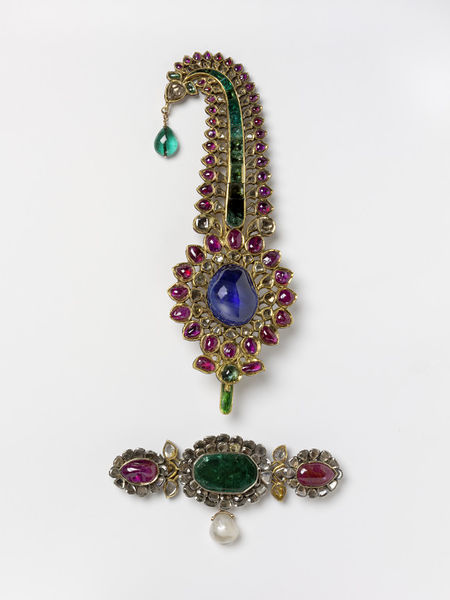