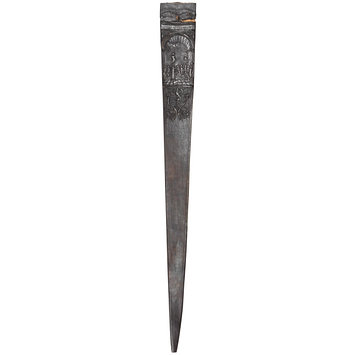 This scabbard was made for a sword that belonged to Cesare Borgia (about 1475-1507), the illegitimate son of Pope Alexander VI (1431-1503). In 1498 Cesare left holy orders after five years to pursue a miltary career. The back of the scabbard is decorated with 'CESAR' monograms and clusters of flames, his personal emblem, and the front with scenes of the worship of the Goddess of Peace. The modelled leather is thought to have been first moistened, then worked on in one small area at a time, and finally hardened with specially heated tools. It was never completed, probably because of the splits that occured on the reverse side. Nevertheless, when this piece was acquired in 1869, Sir Henry Cole (1808-1882), the founding Director of the museum, justifiably hailed it as 'the finest piece of art in leather known'.

This leather scabbard is decorated on the obverse side with scenes of worship and the sacrifice of a ram to the Goddess of Peace (or possibly Venus), placed above an imperial eagle flanked by scrolls and cornucopias, teminating in a series of marked out but uncompleted motifs. On the reverse side there are a number of CAESAR monograms and groups of three flames, the impresa (or personal emblem) of Cesare Borgia (ca.1475-1507), born in Rome, the illegitimate son of Pope Alexander VI (1431-1503), and created Cardinal of Valencia in 1493. This side is fitted with three leather tubes near the top, for straps to fasten the scabbard to the baldric.

In addition to these monograms and imprese, there are two cartouches, the upper one containing two amorini placed either side of a damaged coat of arms and the lower one the Goddess of Peace (or Venus). Near the top on the obverse side, the scabbard is inscribed MATERIAM SUPERABIT OPUS (toil will tame the material).

There are splits on the reverse side which may explain why the scabbard was never completed.

CESAR
Monogram; Three monograms on reverse side of scabbard; Stamping

Purchased by Henry Cole during his journey to Italy with Colonel Scott for £100 through W.Spence. (See Gazette Archeologique, vol XIII (1888) p.65)

Historical significance: This scabbard is emblazoned with the CESAR mongram and three-flamed emblem of Cesare Borgia (1475 - 1507), the illegitimate son of Pope Alexander VI (1431 - 1503) who rose through the hierarchy of the church to the position of Cardinal of Valencia and left his religious posts in 1497 to pursue the life of a warlord until his death in a skirmish in 1503. (The nude goddess being worshipped may represent either Peace or Venus, whom astrologers connected with the constellation Taurus: the bull was the emblem of the Borgia family.) Cesare waged wars on behalf of his father, and conquered much of Romagna including the city of Imola, which he used as his base. He sacked Urbino in 1498 and for a time threatened Florence. Niccolò Machiavelli (1469 - 1527) was sent to negotiate with him and found his cunning and ruthlessness sufficiently impressive to serve as his model for the ideal prince in his treatise, Il Principe, published in Florence in 1513.

Being entitled to wear a sword in peaceful social gatherings as well as battle was the mark of a nobleman. While the sword remained in its sheath or scabbard, it symbolized both the peaceful intent and the social rank of the owner rather than his prowess on the battlefield. Leather was the best material as it was waterproof if properly prepared and it would protect the blade from rust. Swords with long blades are best suited to being paraded in princely and ecclesiastical ceremonies, whereas those with shorter ones, like this example, were more suitable for combat. If the owner was a noble or military commander, a sword with a blade and scabbard, both lavishly decorated with his own personal themes, would have helped provide him with the required swagger to reinforce his status. This item remained unfinished, possibly owing to a defect in the leather.

Tooled leather sword scabbard mounted on a former (dummy blade) and decorated with scenes, monograms and emblems on both sides. Italian, about 1498

I Borgia Milan: Electa, 2002. 297 p. ill ISBN 8843583204
John Fleming, Art Dealing in the Risorgimento, II
The Burlington Magazine, Vol. CXXI [August 1979]; and III, Vol. CXXI [Sept. 1979], p.568-580. See part III, n.34
W.H.Woodward, 'Cesare Borgia', (London, 1913)
Charles Yriarte, 'L'Epée de César Borgia' in Autour des Borgia (Paris 1891), part III, pp. 143 - 209. (Paris, 1890).
Claude Blair, 'Cesare Borgia's sword-scabbard', V & A Bulletin, Vol. II, No. 4 (1966), pp. 125 - 136.
Elizabeth Bemis, The Sword of Cesar Borgia: A redating with an examination of his personal iconography, 2007.
Günter Gall, Leder im Europäischen Kunsthandwerk, Braunschweig 1965, abb. 119, pp.160-3
Peter Thornton, Capolavori lignei in formato ridotto, in Arte Illustrata, Anno V, n.47, gennaio 1972, (pp. 9-12, pp.50-7, pp.108-110, trans. by Elena Lante-Rospigliosi
Translated from the Italian:
"One last item to which I would like to draw the attention of Italian readers is not a wooden object but a leather one, but because the V&A’s rich leather collection also falls under my care I would like to introduce the subject, especially considering that we are dealing with a piece of the most prestigious workmanship. It is a sword scabbard made for Cesare Borgia and stylistically it can be dated to the late fifteenth century (figs. 15 and 16). It was possibly made on the occasion of his renouncing cardinal status in 1498 [note 2]. In fact the scabbard was never finished, probably because the leather tore or was too deeply engraved during its execution (there are two cuts which are not visible in the detailed image shown here), so the lower parts of the front section were only laid out. The delicacy of the work which has been completed is completely exceptional and therefore this scabbard has been considered, from the first, a work of particular prestige otherwise it would not have been preserved until our own time. Presumably another sheath was completed with greater success but it seems to have disappeared. The sword believed to be the one for which the scabbard was made bears the same coat of arms and belongs today to the Duke of Sermoneta. "

SCABBARD made for Cesare Borgia
About 1498

Cesare Borgia is one of the great villains of history. The illegitimate son of Pope Alexander VI, he was a ruthless schemer and soldier who may have murdered his own brother. In 1498 he relinquished his position as cardinal in order to marry. This scabbard and its accompanying sword (in another collection) may have been made to commemorate that occasion.

With the monogram and device of Alexander VI

Museum no. 101-1869 [2008]
SCABBARD
Wrought and incised leather (cuir bouilli), the decoration incomplete
North Italian; late 15th century
Made for Cesare Borgia (c.1475-1507), whose monogram and device it bears, and intended for a sword, bearing the same monogram, in the possession of the Duke of Sermoneta. Both were possibly made to commemorate Cesare Borgia's renunciation of his cardinalate in 1498. []