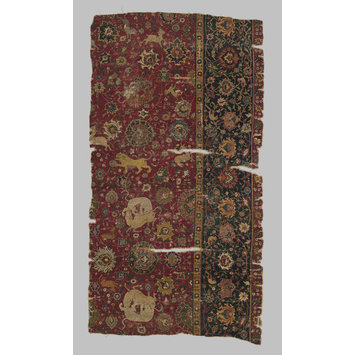 Despite the frail condition of this sixteenth-century carpet fragment, the very fine design may still be read and enjoyed. The section comes from the one side of the original carpet, with the dark green border on the right, and the main field in dark red. The central design is filled with hunting animals, stalking or pouncing upon their prey: lions, tigers, leopards, lynxes, foxes and wolves, all of them hunting after deer. These creatures are not depicted in a natural landscape though, but placed within two spiralling systems of flowering plant scrolls, against a vibrant red background. The largest flowers are lotus blossoms, drafted with bright colours and complex forms, and sometimes outlined against a large lotus leaf. The dark green borders are also filled with spiralling plant scrolls, with long-tailed birds perched on the curving stems.
Even fragments of historic carpets were widely traded in late nineteenth-century Europe, among artists, designers, scholars and private collectors unable to afford the huge market prices reached by whole carpets from sixteenth or seventeenth century Iran. Deeply admired, such fragments could reveal just enough of the design and structure to be of value to a specialist. Two known fragments of this carpet are in design museums (this example in the V&A, and another in Paris at Musee des Arts Decoratifs). The V&A fragment was bought in Italy, from the estate sale of one William Wentworth Buller, in 1884. Buller researched textile history, and collaborated briefly with the British designer William Morris. He had built up a significant study collection of both European and Middle Eastern textiles (including carpets). He bought this beautiful fragment just before his death in 1883, from the auctioned estate of the painter Attilio Simonetti in Rome. Unable to pay for his carpet fragment straightaway, Buller had deposited it with the art-dealer Castellani: he died before he could take possession of it. Simonetti in turn had used his carpet fragment as a prop in at least one of his paintings: it is depicted in a scene (“The Musical Interlude”) laid out as a table carpet. Noticeably Simonetti has depicted the fragment, perhaps with wishful artistic licence, as a whole carpet.

Purchased from the estate of William Wentworth Buller. According to V&A archival records, this carpet fragment was "bought by Mr Buller at the Simonetti sale and left by him on deposit with the late Signor A. Castellani" (V&A Archives, Central Inventory). This refers to the collection of the painter Attilio Simonetti, which was auctioned in Rome in 1883. 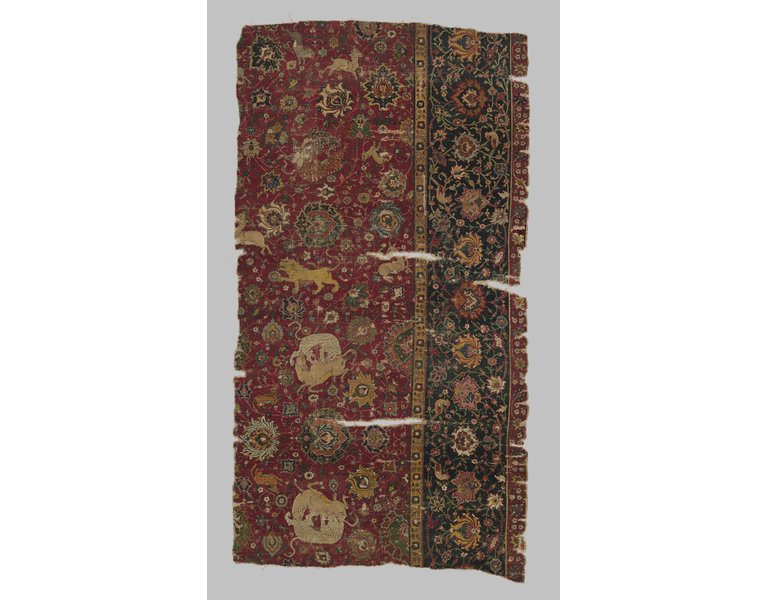