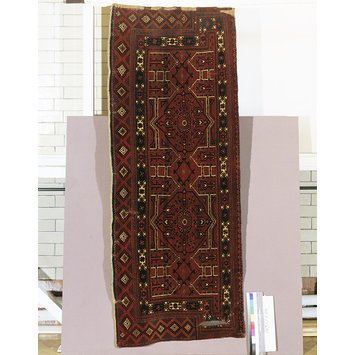 The layout of borders on bag faces is often more complex than it is on floor carpets. Sometimes, as in this example, one border runs along the bottom and part of the way up each side, while the others expand to form a T-shape. There are sometimes extra borders, such as the narrow one along the upper edge. Perhaps because bag faces are relatively small, time was taken to include many small details. Small amounts of light purple silk have been used in the pile.

WEFT: light brown wool; Z spun, unplied with 2 shoots after each row of knots (the first has a single thread and the second has 2 parallel threads); 15 knots per inch (64 per dm).

SIDE FINISH: Left: has one cord oversewn with red wool. Right: incomplete but otherwise is as above.

DESIGN: field: a red ground which extends to left and right at the lower end. There are two large angular medallions also with a red ground; in the centre of each is a dark green and pink star on a dark pink silk ground framed by a dark blue line with Holbein knots. From the inner rim of each medallion are eight hooked pink motifs filled with stylised flowers or chevrons. There are also four roundels of eight flowerheads, the roundels have dark pink silk centres. To either side of the medallions and between are hooked diamonds with a red ground, superimposed upon a rectangle, both outlined in dark green and containing a dark purple silk diamond in a horned pink frame. There is an incomplete hooked diamond at the outer edge of the field. There are two bands of six inward-facing paired arches outlined and linked by a band of flowerheads, the bands outlined in white; within each arch is a stemmed and leafed version of the hooked pink motifs filled with flowers within the two medallions.
The main border: a white ground with brown cartouches linked by brown diamonds with various coloured fields each containing a two-coloured rosette with some petals of dark pink silk.
Inner and outer border: a red ground with green 'S' motifs on the inner and light blue on the outer border.
A lower band of undecorated dark red pile extends one-third of the way up both sides. Below this is a final band of reciprocal horned pattern in dark blue and pink with white flowerheads.
Across the top of the bag face and extending two-thirds of the way down both sides is an overall pattern of diamonds formed by a multi-coloured chequering, predominantly in reds and yellows, with white and dark brown chequered centres. The side extensions end in one row of symmetrical jufti knots in dark blue wool.

Hand knotted woollen and silk pile, on woollen warp and weft; asymmetrical knot, open to the left; 195 knots per sq. in (3,392 per sq. dm)

Identified as "Turkoman Rug", this carpet was purchased for the Museum by Robert Murdoch Smith, from Sidney Churchill in Tehran. It was acquired in a batch of thirteen carpets and carpet fragments and ten specimens of qalamkari printed cotton. Murdoch Smith wrote: "Among the articles are a number of carpets and pieces of carpets of the 17th century and earlier date (some as early as the end of the 15th century or beginning of the 16th century) which will, I think, form a valuable addition to the Museum collection. Some of the best specimens - small pieces, not whole carpets - were got from the rufuqir or darners of worn and torn carpets in the Teheran bazaar."

Panel for a storage bag or chuval, wool and silk knotted pile on wool foundation, Ersari or Salor Turcoman, Iran or Turkmenistan, 1800-1880 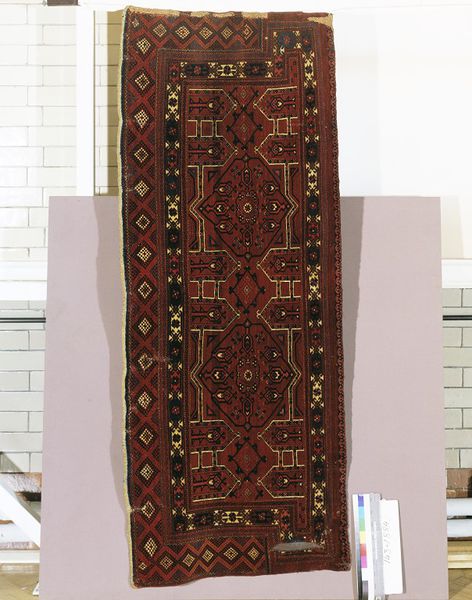