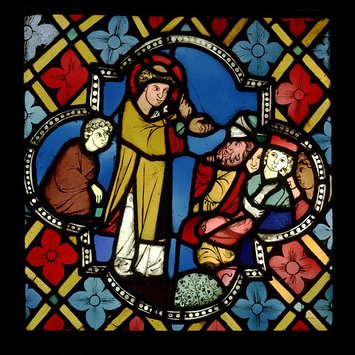 This panel and another one in the Schnutgen Museum in Cologne formed part of a window that depicted scenes from the life of St Stephen. We do not know its original location, but recent research on the panel in the Victoria & Albert Museum suggests that the window may have been in the Liebfrauenkirche (Church of Our Lady) in Trier in Germany. At the time of its acquisition, however, the panel in the Schnutgen Museum was said to come from a Dominican church in Cologne. This would help to explain why St Stephen is depicted in both panels with a monastic tonsure (the crown of his head is shaved), even though he died before monasticism began.

According to Christian tradition, Stephen was one of the first deacons of the emerging church shortly after the crucifixion of Jesus Christ. In the New Testament book of Acts he is described as a popular preacher. However, the Sanhedrin, the supreme Jewish council, misinterpreted his teachings and accused him of blasphemy. This was a charge punishable by death. Stephen was brought before the Sanhedrin to answer these charges and was put to death by stoning.

In this panel we see Stephen preaching before a group of people. We do not know whether this refers to his preaching in general or when he was brought before the Sanhedrin. He is often depicted with his attribute (identifying symbol) of stones, the instruments of his martyrdom.

Stephen was the first to die for the Christian faith and is known as the ‘protomartyr’. His feast day is 26 December, now usually referred to as ‘Boxing Day’ in England.

Stained glass medallion depicting St. Stephen preaching, within a quatrefoil with a beaded border set in a rosette diaper.

Possibly from a medallion window dedicated to the life of St Stephen in the Liebfrauenkirche in Trier.
This panel was on loan from 1909 from JP Morgan Sr. His son, JP Morgan Jr., gave the panel to the museum in 1919 in memory of his newly deceased father and in acknowledgement of Anglo-Americna cooperation during the first world war.

There is another panel from the same window as this one in the Schnutgen Museum in Cologne depicting the stoning of St Stephen.

Panel of clear, coloured and flashed glass with painted details depicting St Stephen Preaching. Possibly originally from the Liebfrauenkirche in Trier. Made in Germany in the Lower Rhineland, c.1260-80.

This panel, and another in the Museum Schnütgen in Cologne showing the Stoning of St Stephen, came from a 'medallion window' dedicated to the Life of St Stephen. It has been suggested that this was in the Liebfrauenkirche (Church of Our Lady) in Trier.

Possibly originally from the Liebfrauenkirche in Trier. 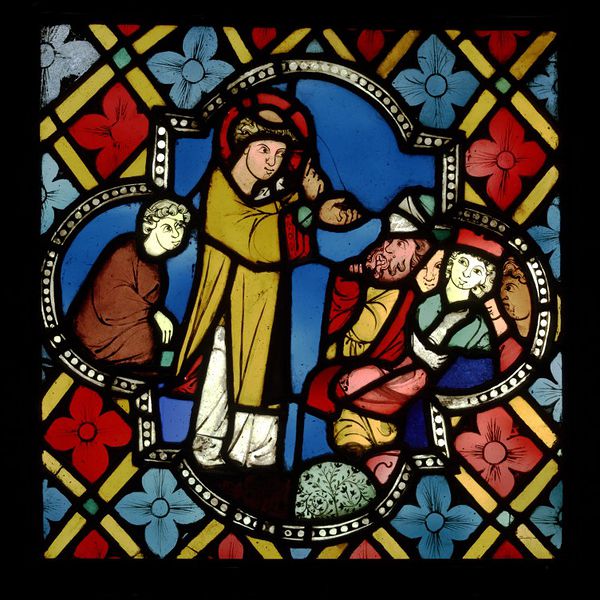