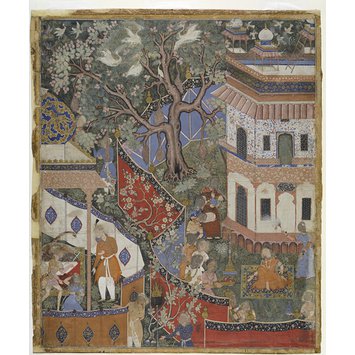 Rustam and Mihrafroz prepare for their wedding

The Hamzanama, or 'Book of Hamza' was commissioned by the great Mughal emperor Akbar in the mid-16th century. The epic story of a character based very loosely on the life of the uncle of the Prophet Muhammad chronicles the fantastic adventures of Hamza as he and his band of heroes fight against the enemies of Islam. The stories, from a long-established oral tradition, were written down in Persian, the language of the court, in multiple volumes. These originally had 1400 illustrations, of which fewer than 200 survive today. The only contemporary version of the text is that on the reverse of the few remaining paintings, making it difficult to reconstruct the stories. Work on the project probably began in about 1562 and took 15 years to complete.
Here, Rustam and Mihr Afruz prepare for their wedding feast in garden pavilions enclosed by tent walls. All the faces of the living beings depicted, whether humans or birds, have been deliberately erased, probably in the 19th century.

Red qanats lined with pale blue and with black-ground borders enclose a garden pavilion and run from the foreground through the centre of the composition to the upper right. Female attendants bring fruits, wine decanters and vessels towards the princess who sits on a rug in the garden outside the pavilion. On the upper level, birds fly round the rectangular structures topped by domes, and a ladder rests against one of them. Nearby, white cranes fly towards a large tree. Outside the tent walls, a prince with one male and one female companion stands within a tented enclosure, next to an open structure resting on slender columns and topped with a dome on a flat roof.

Gouache on prepared cotton backed with paper; calligraphy on the reverse written on paper backed with cotton; the four layers glued together.

An illustration to the epic romance of the Hamzanama commissioned by the Mughal emperor Akbar. bought for the museum by Caspar Purdon Clarke in Srinagar in 1881.

The 'Hamzanama' was the first major project undertaken by the new painting studio of the Mughal court. Directed by two Iranian masters brought to India by Humayun, work began under Akbar and was said to have taken fifteen years to complete, drawing from artists from all over northern Hindustan.

With Hamza's support, Rustam and Mihrafroz prepare for their wedding feast. Hamzanama. 1562-77.

RUSTAM AND MIHRAFRUZ PREPARE FOR THEIR WEDDING
Illustration to the Hamzanama
Gouache and gold painted on cotton, backed with paper
Mughal
c. 1562-77
IS.1519-1883

The Hamzanama was the first major work of Akbar’s ketabkhana, or House of Books. Akbar ordered the stories, usually told by travelling performers or court reciters, to be written down and illustrated. This took fifteen years, with two Iranian masters directing Indian artists from different regions. Together they created a new Mughal style. These pages were bought in 1881 from a Kashmiri curiosity shop. They were plastered to windows to block out the cold and the faces of living beings had been obliterated. [27/9/2013] 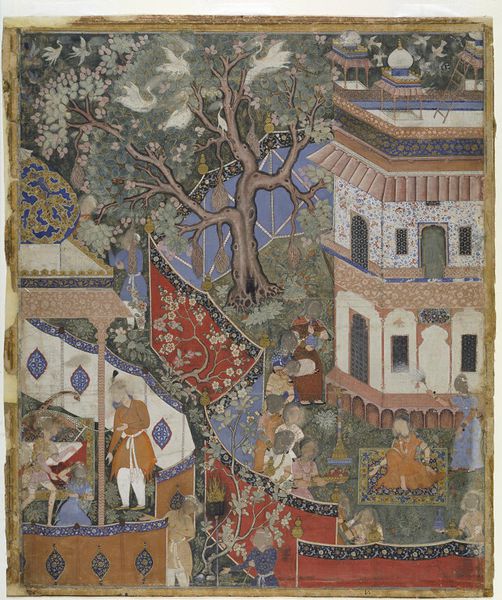