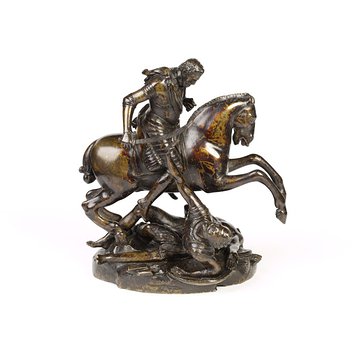 This statuette, of Henri IV of France victorious over his enemies, was made in about 1603 by Barthélémy Prieur, in France.

Prieur (ca. 1536-1611) was one of the most prolific French sculptors of bronze statuettes in the decades around 1600. From 1564 to 1567 he worked in Turin as court sculptor to Duke Emanuel-Philibert of Savoy. In 1591, Henry IV appointed him as his Court Sculptor and in this role he worked on the interior decoration of the Palais du Louvre, Paris. A version of this statuette is documented as being on display in the Louvre Palace in 1603. Henry IV commissioned many images of himself for propaganda purposes. The inventory made at Prieur's death in 1611 includes three busts of the King and Queen, together with a 'figure of the late King on horseback with two captives below'. Several versions of the composition exist, including examples in the Musée Henri IV, Pau (formerly Louvre), the Museum für Kunst und Gewerbe, Hamburg and the Herzog Anton Ulrich-Museum, Brunswick.

King Henry is depicted on a rearing horse, striking down two opponents, one of whom is trying to ward off the sabre about to crash down upon him. Bronze with brown patina.

Historical significance: This theme is inspired by Antiquity. Henry IV dispersed images of his royal person in the form of medallions and small busts, many of the latter were produced by Prieur.

This bronze was used as a furniture bronze. The use of small bronzes as decoration for grand furniture was very common, as can also be seen by a version of the same group at Hatfield House, which is mounted on a 17th century French cabinet. 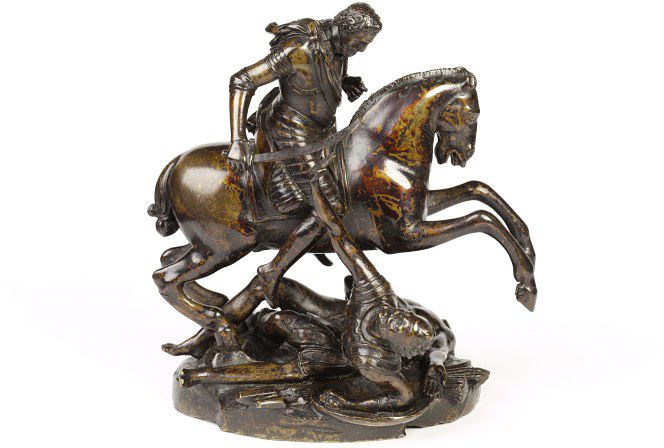