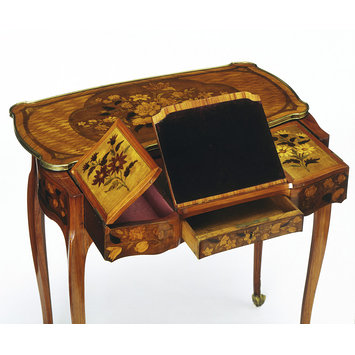 The Parisian cabinet-maker Jean-François Oeben invented this form of small, mechanical writing table in about 1750 and many were made, in a range of sizes. Oeben specialized in mechanical gadgetry and this table uses a complicated mechanism of ratchets and springs so that when the drawer is pulled forward, the top surface of the table moves backwards automatically, until the inner compartment is fully accessible. Oeben was also well known for the kind of delicate floral marquetry that decorates this piece. He was appointed cabinet-maker to the king in 1754. A portrait of the king's mistress, Madame de Pompadour, painted with her young daughter, and so dateable to before the death of the young girl in 1754, includes a table of just this pattern.

Mechanical writing table of oak, with serpentine sides, veneered with tulipwood, with marquetry of rosewood, sycamore, purplewood, boxwood, ebony and other woods, in part stained, shaded and engraved to form decorative patterns of flowers and foliage, the table mounted in gilt bronze. The top of this table moves back on a spung mechanism as the drawer pulls out to reveal hidden compartments and a writing surface, lined with purple velvet.

The spring for the main compartment is cleverly released using the lock in the drawer front. When the key is turned once to the right, the bolt drops from its engagement in the top front rail of the drawer unit, unlocking the drawer. If the key is turned a second time to the right, a bolt drops down through the drawer front to press on one end of a long steel lever. This triggers the spring mechanism, pushing the table top back and pulling the main drawer compartment forward. This can sometimes be a bit reluctant. As the main compartment moves forward a reading slope is automatically released and springs up on a ratchet system.

A square steel frame around the underside of the base of the main drawer pulls forward to release the ratchet system for the reading slope, to allow the top to be closed once more, The front lip of the reading slope is hinged and can simply be folded flat. When the reading slope is flat, it is held in place by a steel spring catch. The surface is covered with purple velvet (probably a replacement) that provides a writing surface when flat.

Oak, veneered with tulipwood, with marquetry of rosewood, sycamore, purplewood, boxwood, ebony, tulipwood and others; in part stained, shaded and engraved with gilt bronze mounts

CR below a closed crown, the whole above two V's overlapping
Stamped on the underside, on a strut across the centre of the carcase

Montaror
Painted in black underneath the front rail and partially illegible.

In the collection of John Jones before 1882, when it was bequeathed to the Museum. Nothing is known of its earlier history.

This pattern of writing table was made in several versions by the cabinet-maker Jean-François Oeben (1721-1763), in various sizes and with different levels of mechanical and decorative sophistication. It seems likely that Oeben invented the form and it is certain that he popularised it. A version was owned by Madame de Pompadour, and is shown in a miniature portrait of her painted by François Guérin, probably in 1763. That portrait shows her with her daughter Alexandrine, who died in 1754 aged 10 but the setting may reflect a slightly later interior (See Madame de Pompadour et les Arts, catalogue of an exhibition at the Château de Versailles, 2002, the catalogue by Xavier Salmon and others, published by the RMN Paris, 2002, pp. 156-7). That table is seen to the left, with the drawer/writing compartment pulled forward. Its fully cabriole legs suggest a slighly early version of the form than that of the V&A table, which has more upright legs, but the side that is visible shows a panel of trellis marquetry, that might be considered more suggestive of the developing neo-classical style. Two surviving tables are close to that model. One is in the Louvre, Paris and is illustrated in Decorative Furnishings and Objets d'Art in the Louvre, ed. Jannic Durand etc al. (Louvre Editions, Paris, 2014), no. 155, pp. 386-7 (inv. no. OA 10404). A very similar table is in the J.Paul Getty Museum, Los Angeles, illustrated in Gillian Wilson and Catherine Hess, Summary Catalogue of European Decorative Arts in the J.Paul Getty Museum (Los Angeles, The J. Paul Getty Museum, 2001), no. 64, pp. 36-37 (inv. no. 71.DA.103). There is, however, no historical connection between either of these and Madame de Pompadour.

Other versions of the table are found in many major collections and appear from time to time in auctions. The major accounts of the closest to the V&A table include:

Baarsen, Reinier, Paris 1650-1900. Decorative Arts in the Rijksmuseum (Yale University Press in Association with the Rijksmuseum, London and Amsterdam, 2013), no. 40, pp. 174-177. This table is close to the V&A table, but is slightly wider. It shows similar floral marquetry and the double stringing in white and black outlining panels - a motif used frequently by Oeben.

This type of writing table was invented by the French royal cabinet-maker Oeben in the 1750s. He specialised in gadgetry such as the large springs that push forward the writing compartment as the table top moves back. He made many versions of this design. In 1756 Louis XV granted him workshops, with special permission to build his own forge.

Marquetry of harewood, tulipwood, sycamore and other woods. Mounted in ormolue. Stamped underneath wiht a crown above the letter 'CR' and a double 'V', which may indicate that this piece was formerly among the furnishings of the Palace of Versailles. It is likely to have been made in the workshops of the royal cabinet-maker, Jean-Francois Oeben (d. 1763), who produced a number of very similar tables. 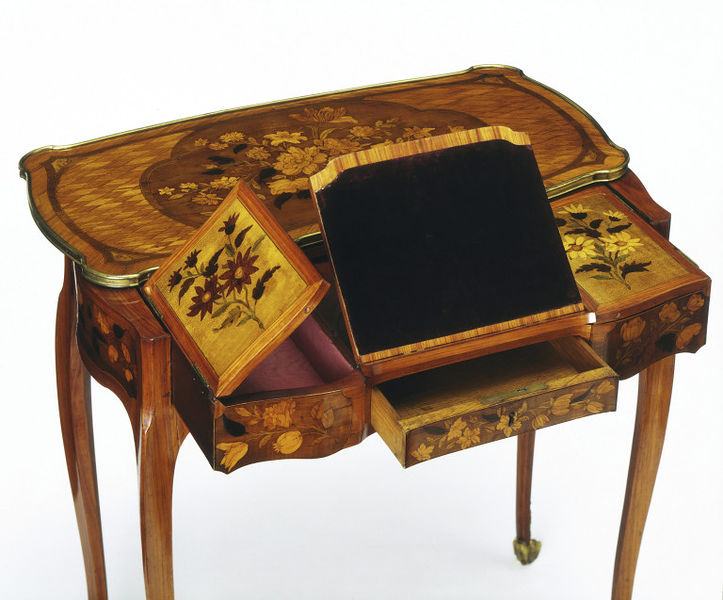