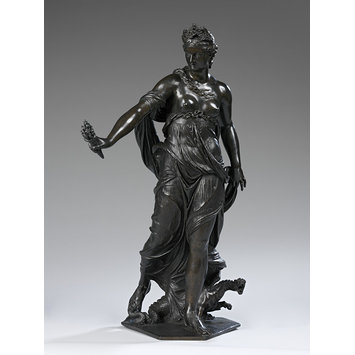 This statuette of Ceres derives from a model that formed part of a set of six statuettes of gods and goddesses commissioned from Michel Anguier in 1652. In 1690, they were described by Guillet de Saint-Georges, the first historian of the French Royal Academy of Painting and Sculpture, with the evocative titles of ‘a thundering Jupiter, a jealous Juno, an agitated Neptune, a tranquil Amphitrite, a melancholy Pluto, … and a weeping Ceres’. They were created as pairs to represent the elements of air (Jupiter and Juno), water (Neptune, for which see inv. no. A.206-1946, and Amphitrite) and earth (Pluto and Ceres), but lacking the fourth element of fire.

The crown of wheat around Ceres’ head signals that she is the goddess of Agriculture, and a symbol of fertility. She is shown here striding forward, holding out a torch as she searches for her daughter Proserpina, who Pluto had carried away into the underworld, an episode taken from Ovid’s Metamorphoses. Ceres was often depicted in a chariot drawn by dragons, one of which is shown here, crouching at her feet. The earliest versions of this series of bronzes, possibly cast in the 1660s or 70s, incorporated hexagonal bases, while in later casts they were square. This version has a thinner polygonal base, but Ceres is shown bare-breasted, as in later versions.

Michel Anguier (1612/14-1686) was apprenticed to his father, Honoré, a woodworker in the French town of Eu, before moving to Paris to join the workshop of Simon Guillain in around 1629-33. He was one of a number of artists who moved to Rome, where he spent ten years from 1641, assisting the two leading (and rival) sculptors of the day, Gianlorenzo Bernini and Alessandro Algardi. He received the commission for this series of gods and goddesses after returning to Paris in 1651. In his later years, Anguier lectured at the Académie Royale on a variety of subjects, notably including different expressions of anger (1675) and the depiction of gods through their temperaments (1676). He was not known as a maker of bronzes, and it is possible that he turned to a specialist foundry to assist with reproducing his models as his large-scale commissions declined. His lively bronzes were collected throughout the 18th century in France. This Ceres was bought from the Portalès sale in Paris in 1865, one of the finest collections sold in the 19th century, having belonged to James-Alexandre, count of Portalès-Gorgier (1776-1855).

Statuette of a semi-clad figure of Ceres, goddess of Agriculture, with a dragon at her feet. She wears a crown of wheat on her head, and clutches her drapery in her left hand. In her outstretched right hand, she is holding a torch.

This object was purchased in 1865 for £280, from a sale at the Pourtalès Collection in Paris, where many Italian art objects were being sold as a result of their flooding the market after the Napolenic wars.

For the history of this series of bronzes by Michel Anguier see most recently Wardropper 2008 and 2009. 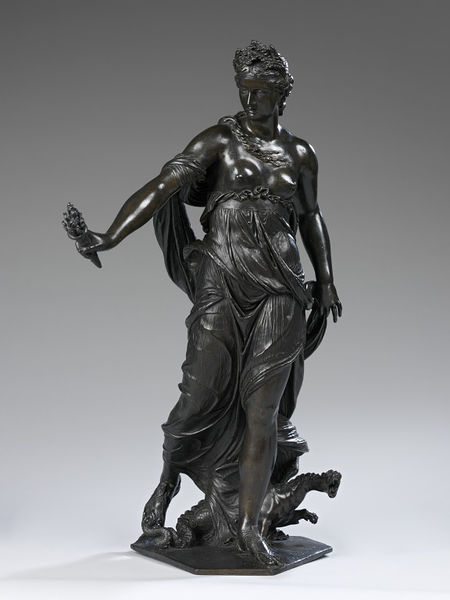