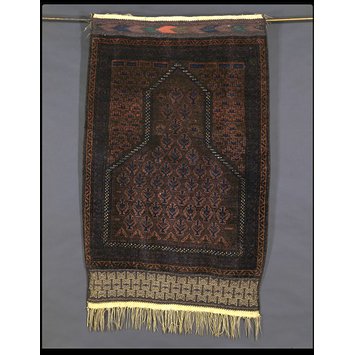 When a carpet designer has a severely limited palette to work with, small amounts of light or bright colour can be critical: the white outline of simple dots is enhanced by the dark border around the carpet and it forms an eye-catching boundary between the pattern within the niche and that in the spandrels beyond it.

WEFT: grey wool; Z spun, unplied; 2 parallel threads per shoot and 2 shoots after each row of knots - sometimes a third eccentric shoot has been inserted to form a wedge to even up the pattern; 9 knots per inch (34 per dm).

SIDE FINISH: both sides have one cord of returned weft with plaited overcasting in dark brown goat hair that continues along the plain weave selvedges and ends with a 5" (12.5 cms) freehanging plait at both sides.

END FINISH: Lower: there are five bands with a total length, excluding fringe, of 7" (17.5 cms); beginning with the lowest: 1) 1" (2 cms) of plain weave with white wool weft. 2) narrow band of flatweave in reciprocal black and white running dog pattern. 3) and 5) black ground of weft float with an S motif across the linking line; the design in dark pink, the bands edged by a line of soumak over 5 warps and back under 2 in alternate stitches of dark blue and dark purple which interlace. 4) 5" (12 cms) of weaving with black ground; the purple trellis in a weft float is composed of 2 bands of an interlinking horned motif with paired horns at right angles to the outer pairs, enclosing a blue diamond and forming an intermediate band. The lower fringe has uncut warp threads, many now frayed, plaited horizontally, then knotted in pairs 42" (11.5 cms) max long, with 8 warps forming the final cord on the left.
Upper: there are 5 bands as above; beginning at the top: 1), 2), 3) and 5) are as described above. 4) 12" (4 cms) has an interlocking series of plain weave chevrons in all colours except white with the interlocking stitch carried over 4 warps on the reverse. The warp ends are twined and from behind this band extends a fringe of 6" (15 cms) knotted at the ends. Warp threads have been paired after it was taken down. Each thread is twined around the 3 pairs next to it. The end is then passed to the back and is knotted.
NB: knots in the warp have been pulled through to the pile. They probably wear better on this side than on the back.

DESIGN: Field: dark purple ground; at the bottom is a band of seven dark brown triangles framed on both slopes by two dark pink circles meeting at an arrowhead outlined in dark pink.
The rest of the field and the angular, pointed niche contains 10 bands of a blue, shrub-like motif with an arrowhead thrusting out of the top, all outlined, first in dark pink and then in dark blue. The bands are offset.
The two spandrels have a brown ground with 12 offset bands of stylised blue leaves outlined in dark pink. The top band is of eight rectangles in blue or brown, outlined in dark pink and containing from three to five purple circles. Each rectangle has a 'leaf stalk' attached.
Borders: the field and niche is bordered by diagonal blocks of purple, brown and blue with three white knots at each colour change.
Main border has a reciprocal band of paired horns in purple and brown, outlined in blue.
Outer border: dark pink ground with an angular meander enclosing triangles, all purple, outlined in dark brown.
Guard stripes between all borders are of narrow diagonal blocks in purple and blue between dark brown lines.
Date analysed: 28.3.95

Hand knotted woollen pile, on woollen warp and weft; asymmetrical knot, open to the left; 68 knots per sq. in (986 per sq. dm) 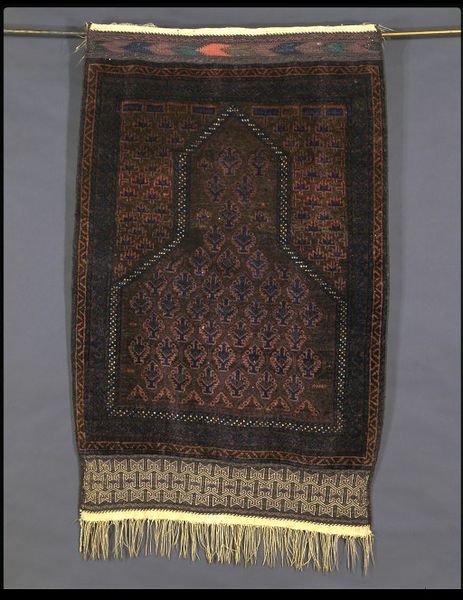