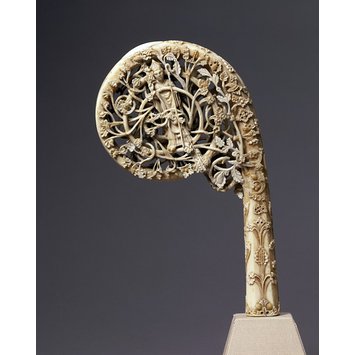 This is the head of a crozier in walrus ivory and later bone additions, made in Norway in the late fourteenth century.
Gothic art often depicted the natural world. Here, St Olav and another figure that probably represents St Augustine are entwined in foliage. The representation of a bishop’s staff as if made of foliage recalled the rod of Aaron in the Old Testament, which ‘brought forth buds and bloomed blossoms’. The present crozier is a rare example of a Scandinavian ivory carving.

The name crozier is commonly used for the crook-shaped pastoral staff of a bishop or abbot. It forms part of their insignia.
It was carried as a symbol of authority and pastoral care. It was made of various materials, but by the twelfth century ivory was in widespread use for the head of the crozier. The shaft was often made of wood, occasionally embellished with metal knops, although on Italian Gothic examples, ivory and bone cylinders were used in construction. French Gothic ivory crozier heads are predominantly of one design, with the Crucifixion and the Virgin and St John on one side and the Virgin and Child, flanked by candle-bearing angels, on the other. It appears that the principal face was that to be seen when the volute of the crozier was facing to the right.

Crozier with traces of gilding, decorated with plant forms and on one side with a figure of St Olav, King of Norway, and on the other, probably St. Eystein (Augustine). The stem and the volute are covered with foliage and fruit. Crozier head is constructed of two pieces of walrus ivory jopined together diagonally across the volute. Unlike elephant ivory, walrus tusks were not of sufficient width to allow the carving of a normal-sized volute with one piece.

Known as the Digby crozier, because it had been in the possession of the Wingfield Digby family at Sherborne castle in Dorset for more than three hundred years. According to tradition, passed on by Lt.-Col. FR.J.B. Wingfield-Digby, DSO, in 1930, the crozier head was said to have belonged to theRight Revd Essex Digby, Bishop of Dromore (d. 1683) or to his son Simon Digby, Bishop of Elphin (d. 1720).
On loan to the museum 1930-2002. Accepted by H.M. Governement in lieu of inheritance tax (estate of S. Wingfield Digby) and allocated to the V&A in 2002.

Historical significance: The present crozier is a rare example of a Scandinavian ivory carving.

The name crozier is commonly used for the crook-shaped pastoral staff of a bishop or abbot. It forms part of their insignia. 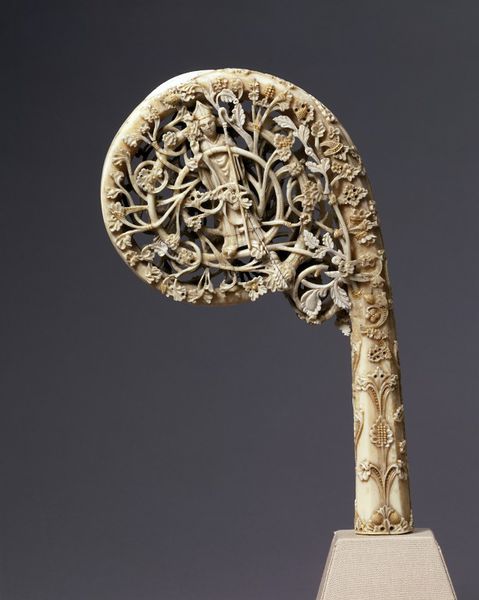