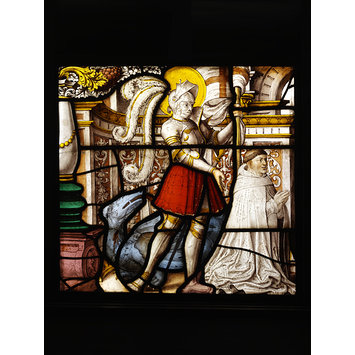 Peter Blanckenheim, priest of Dunwald, with his patron St George

This is one of many panels in the Victoria & Albert Museum's collection of stained glass from the Abbey of Steinfeld in Germany. It was originally in the sixteenth window in the abbey cloister.

During the Revolutionary struggles in France and the subsequent religious upheavals under Napolean, many monastic institutions on the continent were 'secularised' and their buildings destroyed. The abbey of Steinfeld was closed down in 1802 but prior to that in 1785 the stained glass windows of the cloister had been taken down. It is believed that they were purchased, probably at the time of the closure in 1802, by John Christopher Hampp of Norwich. Hampp sold the Steinfeld panels to various churches and to private collections. Many of these were purchased by the collector, Lord Brownlow, who had them installed in his new chapel at Ashridge Park in Hertfordshire between 1811 and 1831.

The scheme of cloister glazing at the Praemonstratensian abbey of Steinfeld was commissioned by its abbot, Johann von Ahrweiler (1517-1538).

We know the layout of the windows of the cloister glazing at Steinfeld from an illustrated manuscript that was made in 1632 and was housed at Trier.
Another manuscript showing the arrangement of the windows is in the state archives in Dusseldorf. This dates from 1719.

This panel was located in the bottom of the 16th window in Steinfeld Cloister. The V&A has another panel from this window (Museum no. C.285-1928) depicting 'Christ at the House of Simon', although the imagery is confused because of later replacements in the panel.

By the end of the Middle Ages, the cult of St George had spread widely from its original centres in the eastern lands of the old Roman Empire. George was most likely martyred during the persecutions of the Emperor Diocletian in 302/3. Evidence suggests that the Emperor Constantine himself promoted the cult of St George in the period 320-340 once he had assumed control over the eastern part of the Roman empire.

It seems that George's status as a 'warrior of the church' was greatly promoted in the West by the fighting classes in medieval society. Certainly, the Crusaders returning from the Holy Land spread awareness of the saint and the sites associated with his cult, and he quickly became the protective saint of many areas in Western Europe.

Gerhard Remisch (or 'Remsich') was a glass painter and head of a prolific stained glass workshop in the Rhineland.

History of the Windows
(c.1590-1600) Note in Trier MS that windows had been removed and taken to nearby monastery of Minstereifel and put back 12 years later. Were broken in several places by the removal.
(1632) Abbot Norbert of Horichem composed a manuscript (in Latin) of the panels in the cloister as they came down. Were taken down to protect them from the invading Swedish army at the beginning of the Thirty Years War. This manuscript is now in the City Library in Trier but C&G have a photostat.
(1654) Panels reinstated - Trier MS used as a guide.
(1654-1785) Panels taken out and reinstated four times more.

In the cloister of Steinfeld until about 1802.
From about 1811 until 1928 it was installed in the Chapel at Ashridge Park, Hertfordshire.
(12 July 1928) Sold at Sotheby's. Subsequently given to the museum by the purchaser Mr. E. E. Cook.

The glazing programme of the cloister at the Premonstratensian abbey of Steinfeld, in the Eifel region between Cologne and Trier, was executed between about 1522 and 1557. The work was carried out consecutively, window by window, starting at the north-west and running around the cloister, taking in twenty-seven windows in all. With a few exceptions, these were three-light windows with tracery lights above. The three-panelled main lights were invariably divided into two parts, with narrative scenes occupying the middle and upper panels, and donor figures mostly filling the ‘socle’ zone below. The master glazier responsible for the windows up to about 1537-8 appears to be Gerhard Remisch (or Remsich), whose monogram appears in window no. 13, made in 1534 (see C.211-1928). The museum possesses 38 panels from this cloister.

Bernard Rackham on the Mariawald-Ashridge Glass, 1944

(1736) A writer called Hugo wrote in the Annales Premonstratenses that the celebrated glass painter Gerhart Remsich painted the windows inserted by Abbot Johann von Ahrweiler (1517-1538) in the cloisters of the Premonstratensian Abbey of Steinfeld in the Eifel.
(1834) Barsch makes the same claim but spells the name ‘Remisch’.
(1906) M.R. James’ description of the Ashridge glass – all Steinfeld.
(1908) Rektor N. Reinartz visited Ashridge and described the glass as of the Cologne School and connected with Steinfeld.
(1928) Ashridge sold and the glass put up for auction at Sotheby’s.
Bought by anonymous and then given to V&A, with exception of three panels kept in his personal possession

The imagery on this panel has often been confused with similar representations showing Mary Magdalene washing Christ's feet as he sat at table. The panel here illustrates the story related by Luke when Christ was invited to a meal in the house of Simon the Pharisee in the city of Nain. The woman who came in to attend to Christ was described as a 'sinner'. Tradition ascribes the sin of adultery to her. The message related here is one of forgiveness of sins - the greater the sin, the greater the repentance.

Although the details are confused, the other gospel writers record another story that has many similarities to the one by Luke but has a very different message to tell. In these, Christ and his disciples are in Bethany at Simon the Leper's house or at the house of Lazarus, brother of Martha and Mary Magdalene. In this story, Mary Magdalene washes and annoints Christ's feet with costly ointments. The disciples (especially Judas) object as the money could have been better spent on the poor. Christ informs them that 'the poor will always be with you but I shall not'.

Research since
(1913) Schmitz refers to a MS in the city library of Trier (Treves)
describes the windows in the Steinfeld cloisters
copy in C&G
(1929) Reinartz says the Ashridge glass is not all from Steinfeld (as M.R. James thought) after discussions with the abbot at Mariawald
thinks that Steinfeld and Mariawald glass was all painted by Gerard Remisch
(1929) Sydney Harrison, Bowes Museum recognised that two Ashridge panels closely corresponded to a painting from an altarpiece at Bowes by the ‘Master of St. Severin’, of Cologne
- Raising of Lazarus (just shows Christ), Mariawald
- Raising of Lazarus (shows Lazarus), Mariawald
Rackham: altarpiece and glass from same drawing and probably painted by same person
(1944) Rackham:
1) Reinartz didn’t recognise that the Ashridge windows come from more than one other souce and have no relation to the two series, from Steinfeld and Mariawald.
2) Remisch didn’t paint all of the Steinfeld and Mariawald windows
- confusion over mongrams
1) Christ and his Disciples Crossing the Brook at Cedron, Window XIII, Steinfeld cloisters – monogram of Gerhard Remsich
2) Jacob and Esau (kept by anonymous buyer at this time) – monogram of someone else
3) Many of the windows painted by Remsich bear dates, ranging from 1527 to 1542. From the style of the architecture, they are Renaissance. [Seems to be saying that Remsich only worked at Steinfeld.]
4) Deduce that Mariawald panels also came from a cloister setting because their size and design are like that of Steinfeld which we know to have come from the cloisters (Trier MS).
5) The Ashridge Mariawald panels fall into two series – early and late depending on the style of the architectural surrounds
- (earlier, 1510-20) flanking columns with Gothic capitals and bases; slender shafts decorated either with lozenge pattern or with spiral or boken fluting; sometimes have cusped Gothic spandrels
- (later, 1520-30) show fully developed Renaissance ornament
6) Subjects:
- (Mariawald) Old and New Testaments
– come from the Biblia Pauperum
mostly copied from the woodcuts in the blockbook printed by Albrecht Pfister, Bamberg, in 1462/1463
not copied in order, the Gothic style panels are copies from later in the story woodcuts
- (Steinfeld) Story of man’s Redemption – incidents in the Life and Passion of Christ

7) Mariawald panels (windows of two lights each)
1) early ones, in order
Elijah and the Widow’s Son (BP)
The Raising of Lazarus (St.Severin)- two panels, occupying two lights
The Transfiguration (BP)/ The Triumph of David (BP)
Elisha and the Sons of the Prophets (BP) (James thought it was an incident in the life of St. Norbert)
2) later ones
Gideon and the Fleece (BP)
The Nativity
Moses and the Burning Bush
similar to a woodcut in the Netherlandish edition of the Speculum Humanae Salvationis, printed about 1475-9
The Circumcision of Isaac
The Presentation in the Temple
The Repose on the Way to Egypt (subject not found in BP)
The Worship of the Golden Calf
The Massacre of the Sons of Ahaziah by order of Queen Athalia
The Massacre of the Innocents
some elements of copied from engraving by Marcantonio Raimondi, after Raphael
Christ with his Parents on the way to the Passover
The Cleansing of Naaman / The Baptism
coupling of these two events derives from Speculum rather than from Biblia
The Temptation in the Wilderness
Joab murdered by Amasa
Heinrich von Binsfeld, Abbot of the Imperial Abbey of Cornelimunster (near Aachen) (1491-1532) and his patron St. Cornelius (two separate panels, occupying 2 lights of one window)

8) Steinfeld panels (windows mostly of 3 lights each)
Massacre of the Innocents, dated 1528
the central pair are also after the Marcantonio Raimondi engraving
9) Other Ashridge panels
Lord Mayor’s Chapel, Bristol (Steinfeld)
Marston Bigot Church, Somerset – The Return of Jacob to his Country (Mariawald)

During the Revolutionary struggles in France and the subsequent religious upheavals under Napolean, many monastic institutions on the continent were 'secularised' and their buildings destroyed. The abbey of Steinfeld was closed down in 1802 but prior to that in 1785 the stained glass windows of the cloister had been taken down. It is believed that they were purchased, probably at the time of the closure in 1802, by John Christopher Hampp of Norwich. Hampp sold the Steinfeld panels to various churches and to private collections. Many of these were purchased by the collector, Lord Brownlow, who had them installed in his new chapel at Ashridge Park in Hertfordshire between 1811 and 1831.

Abbot Johann von Ahrweiler (1517-1538) commissioned windows for the cloiser of the Praemonstratensian abbey of Steinfeld in the Eifel.

We know the layout of the windows of the cloister glazing at Steinfeld from an illustrated manuscript that was made in 1632 and was housed at Trier.
Another manuscript showing the arrangement of the windows is in the state archives in Dusseldorf. This dates from 1719.

The majority of the windows appear to be from the workshop of the glass painter Gerhard Remisch.

Panel of clear and coloured glass painted with brown/black pigment and silver (yellow) stain. Depicting the donor Peter Blankenheim and his patron saint St George. Originally from the sixteenth window depicting the Flagellation and Crowning with Thorns in the cloister of Steinfeld Abbey. Made in the workshop of Gerhard Remsich. German (Lower Rhine), 1538.

Originally from the sixteenth window in the cloister of Steinfeld Abbey 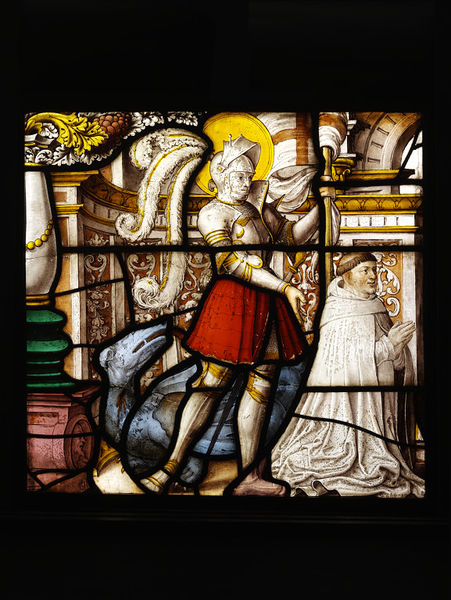