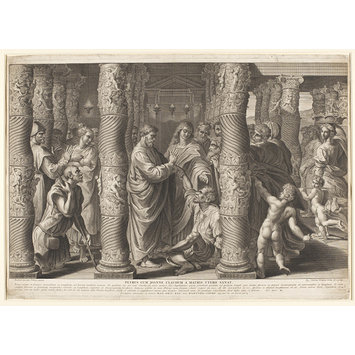 Healing of the Lame Man

The subject of this print is the Healing of the Lame Man by Saints Peter and John. The event took place at the Temple of Jerusalem at a gate known as the Beautiful Gate, which led to the entry into the Women's Court, where Israelite men and women could make offerings for the upkeep of the Temple. The man was begging for alms but Peter and John instead gave him the gift of being able to walk. The spiral columns shown in this image were modelled on those of the tomb of St Peter in St Peter's Basilica.

The engraver and antiquarian George Vertue had met and spoken with Dorigny. Vertue records that "several gentlemen of note travelling to Rome there found Mr Dorigny who was then in the highest reputation for several engraved works after Raphael. These got him justly the reputation of the first engraver in Europe for which reason several Curious persons persuaded & engaged him to come to England to undertake those Famous Cartons at Hampton Court painted by Raphael...From his coming to England [in 1711] I may justly date the rise of the reputation of the engraving." According to George Vertue, Dorigny acknowledged trying to imitate the great French engraver Gérard Audran when he was studying to improve his engraving style.

The subject is the Healing of the Lame Man by Saints Peter and John at the Beautiful Gate of the Temple of Jerusalem.

Scene showing a covered walkway of rows of spiral columns decorated with acanthus and putti climbing amongst foliage. A crowd waiting in the walkway watches as Peter and John help a lame man, sitting cross-legged in the centre foreground, to stand up. Another man with staff kneels nearby to the left. In the crowd to the right are two young children, one carrying two birds, a woman holding a baby and a woman carrying a basket of good, probably as a temple offering.

NB. While the term ‘lame’ has been used in this record, it has since fallen from usage and is now considered offensive. The term is repeated in this record in its original historical context.

The Healing of the Lame Man by Sir Nicholas Dorigny (1657-1746); from a cartoon by Raphael for the tapestries in the Sistine Chapel; etching and engraving; British; originally printed 1719, a later impression.

The lettering in this set of prints is entirely in Latin underlining how they were aimed at an elite educated market. Listed are the titles, biblical quotations, details of the lcoations of the Cartoons and their sizes. [1995] 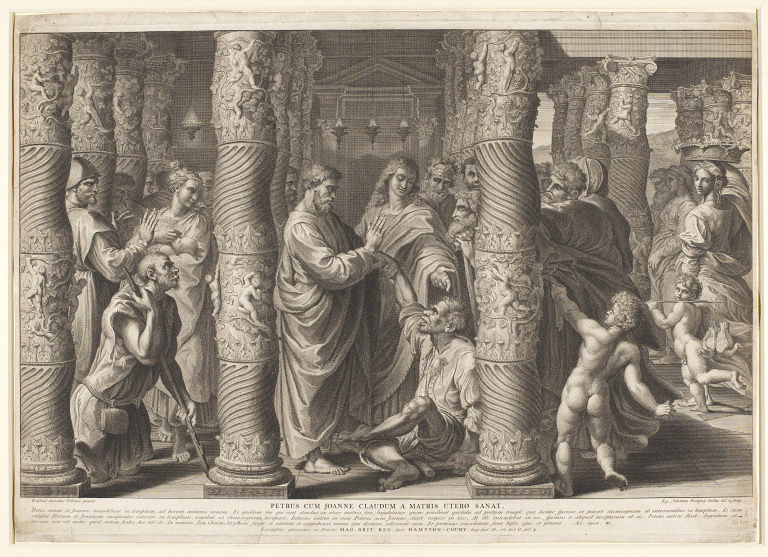