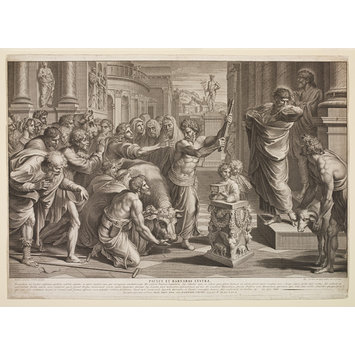 The Sacrifice at Lystra

The engraver and antiquarian George Vertue had met and spoken with Dorigny. Vertue records that "several gentlemen of note travelling to Rome there found Mr Dorigny who was then in the highest reputation for several engraved works after Raphael. These got him justly the reputation of the first engraver in Europe for which reason several Curious persons persuaded & engaged him to come to England to undertake those Famous Cartons at Hampton Court painted by Raphael...From his coming to England [in 1711] I may justly date the rise of the reputation of the engraving." According to George Vertue, Dorigny acknowledged trying to imitate the great French engraver Gérard Audran when he was studying to improve his engraving style.

In a town centre square with classical buildings a crowd has gathered to watch a sacrifice of two bulls and a ram. In the centre a man raises an axe to kill the bull standing in the centre. To the right, Saints Paul and Barnabas stand on a raised platform and there is a square plinth (altar) ornamented with carved festoons, angles, rams heads, animals a jug and a medallion, behind this stand two boys, one holdind a decorated box and the other playing pipes. In the background is a statue of Mercury on a plinth and behind is a landscape representation with more buildings. Lower left of the image a man has thrown away his walking sticks.

The Sacrifice at Lystra by Sir Nicholas Dorigny (1657-1746); from a cartoon by Raphael for the tapestries in the Sistine Chapel; etching and engraving; British; originally printed 1719, a later impression.

Queen Anne had died while Dorigny was still at work. On the first of April 1719 Dorigny presented to King George I two sets of his newly completed prints of the Cartoons. On the 13th June 1720 Dorigny received a knighthood. He was the first of only two individuals in the history of British art to be knighted for having made particular prints. The other was Sir Robert Strange, knighted in 1787 for an engraving of Benjamin West's 'Apotheosis of the Princes Octavius and Alfred'. [1995] 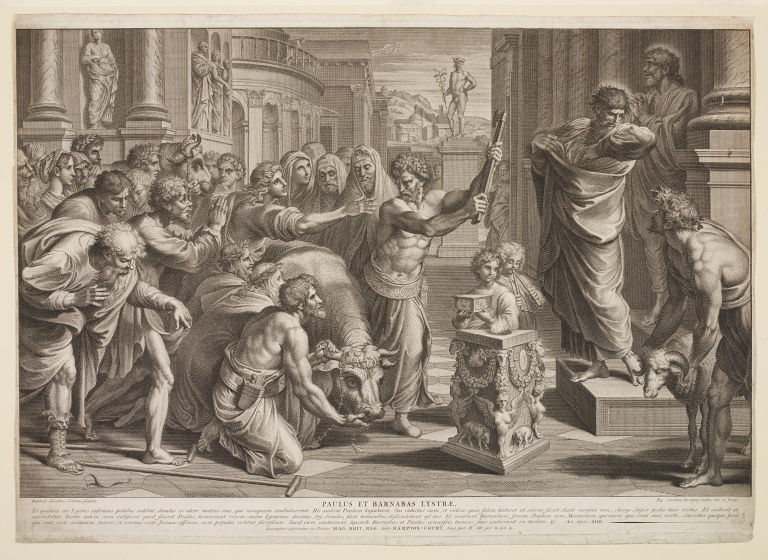