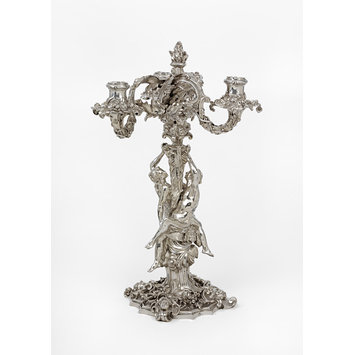 Unusually, Hercules is shown in a woman's robe with slim female limbs while his lover Queen Iole, sits on his lion's skin. Enslaved to her as a punishment for murder, he had to dress as a woman and spin yarn. Ovid's story was interpreted as expressing female dominance over men.

These spectacular candelabra follow a design created by the French court goldsmith Thomas Germain, devised five years earlier. Germain's expressive and beautifully modelled silver was greatly admired by certain English noblemen. The Duke of Beaufort ordered a centrepiece from him and these candelabra may have been copied from a pair supplied by Germain to Lionel Tollemarche for Ham House. Other leading goldsmiths such as John Hugh le Sage and George Wickes supplied versions of this design well into the mid-1740s.

Each putto has appropriate physiognomy and is set in varying scrollwork cartouches linked by emblems of the Seasons applied and modelled in full relief. The Seasons are represented as follows:
Spring- a spray of roses and other flowers
Summer- a spray of wheat
Autumn- grape laden branches
Winter- sprays of root vegetables

The stems are formed as figures of Hercules and Iole seated on a scrolled pediment covered by a lion skin, each figure almost naked, her right hand resting on his thigh, between them, they support fringed drapery below the sconce cast in high relief with the four Winds modelled as winged putto heads with puffed cheeks. The three lights are attached to a central branch, secured by a screw, and formed of curving acanthus sprays extending into scrolls wrapped with berried foliage modelled in full relief and tied at the backs; the drip-pans formed of twisted acanthus leaves laden with garlands of fruit and flowers modelled in high relief; the sconces have two modelled bands chased with strapwork at intervals, the whole is surmounted by a a central octagonal flaming urn finial.

Historical significance: This pair of candelabra were made in the workshop of Charles Frederick Kandler, a goldsmith who is thought to have come from the Kändler family of porcelain modellers at Meissen. A Carl Rudolph Kändler was apprenticed to the Dresden Court goldsmith Johann Jacob Irminger in 1710, and there is a possibility that he came to London (see Peter Cameron: ‘Henry Jernegan, the Kandlers and the client who changed his mind’, in The Silver Society Journal, Autumn 1996). Certainly, by 1727 a Charles Kandler was working in London, although frustratingly little is known of either him or his brother who succeeded him, although the work which survives, including a pair of gilt salvers for the Duke of Cleveland and Southampton of 1732, suggests a business operating at the top of the market. Charles Kandler’s first dated mark was entered in 1727, and he was apparently succeeded by his brother Charles Frederick in the late 1730s. Probably the most famous piece from the Kandler workshop is the great wine cooler completed by 1737, of which there is an electrotype in the V&A, commissioned by the goldsmith-banker Henry Jernegan, designed by George Vertue and modelled by Michael Rysbrack as a lottery prize. The original is now in the Hermitage. This formidable team makes it clear that Kandler’s workshop could be trusted with a high-profile commission, and that it was comfortable with the latest fashion. Certainly the candelabra themselves are in an assured Rococo manner, with a bravura exuberance which points to a strongly continental understanding of design, modelling and facture.

The figural candlestick stem relates to two pairs of Daphne and Apollo candlesticks in the V&A, which in turn are based on a contemporary design of around 1740 (also in the Museum), by George Michael Moser. However, the Kandler candelabras’ direct antecedent is a much more ambitious model created by the French court goldsmith, Thomas Germain in 1734-5 (a pair of that date are in the Espirito Santo Collection, Portugal) that appears in his portrait with his wife by Nicolas de Largillière of 1736. They share the same figural stems with seated, twining figures and branches in the form of extravagantly scrolled acanthus. However, Kandler took the design a stage further. With all the aplomb of a German-trained chaser, he embellished the base with playful Rococo representations of the Continents set amongst foliage, a swirling asymetric scroll to support the figures, and loaded his branches with fruit and swags, where his French counterpart had designed a rather more restrained combination of circular base supported on volutes and decorated with basketwork, elegant cylindrical plinth and socle, and nozzles in the form of sunflowers. The latter are a reference to Chlyte, who loved Apollo and was transformed into a sunflower, and Kandler cleverly develops the theme of metamorphosis in choosing Hercules’ “transformation” into a woman as his subject. Unusually, the hero is shown in a woman's robe, while his lover sits on his lion skin, taken from Ovid's Metamorphoses. While enslaved to Iole as a punishment for murder, Hercules was forced to dress as a woman and spin yarn.

Germain’s expressive and beautifully modelled silver was greatly admired by certain English aristocrats who looked to France for the best in style and design. He supplied silver to the Duke of Beaufort in the 1720s and 30s, and these candelabra may have been based on a French pair known to have been supplied to Lyonel Tollemache for Ham House (sold in 1954 – information Philippa Glanville). His son, François-Thomas Germain revived the pattern in 1757. However, Kandler was not only the first to use it in Britain, but was unique in using the design as inspiration and developing it, rather than merely reproducing the existing model. Four major firms followed Kandler’s lead, but resorted to direct copies of the Germain candelabra, a testament to the enduring popularity of the design. John Hugh le Sage supplied a pair to the Jewel House in 1744, George Wickes’ workshop ledgers reveal a pair ordered by the Earl of Kildare in 1745, two were made by Parker and Wakelin in 1770 (Anglesey Abbey, National Trust) and the last known examples were from Paul Storr’s workshop as late as 1816. This impulse to rework or reproduce French designs was a reflection of the demand from discerning clients for high-quality, fashionable plate. Both Paul Crespin and Simon Pantin copied pieces by Germain.

Although it is not known for whom the candelabra were commissioned, they were part of the Duke of York’s sale in 1827, where they were described in the catalogue as “very old and fine English workmanship”. The exuberant design must have had enormous appeal for the antiquarian, silver-loving Duke, who was supplied with huge quantities of historicist plate by the dealer Kensington Lewis. It may not be coincidence that they share a subject – Hercules – with the spectacular centrepiece made for the Duke in 1824 by Edward Farrell, which relates to the magnificent Neptune candelabrum, recently presented to the V&A, also by Farrell for the Duke of York. It has been argued that the hero may be an allusion to his position as Commander-in-Chief of the army.

The Kandler candelabra are not only an outstanding English interpretation of the Rococo, but they are an example of the powerful appeal of French style and taste to an elite section of the market. They throw light on a little-documented but fascinating workshop, and a goldsmith who is now recognized as one of the pre-eminent of his generation.

A three-light silver candelabrum, the stem in the form of Hercules and Iole, by Charles Frederick Kandler, London, 1738-1739.

Unusually, Hercules is shown in a woman's robe with slim female limbs while his lover Queen Iole, sits on his lion's skin. Enslaved to her as a punishment for murder, he had to dress as a woman and spin yarn. Ovid's story was interpreted as expressing female dominance over men.
These spectacular candelabra follow a design created by the French court goldsmith Thomas Germain, devised five years earlier. Germain's expressive and beautifully modelled silver was greatly admired by certain English noblemen. The Duke of Beaufort ordered a centrepiece from him and these candelabra may have been copied from a pair supplied by Germain to Lionel Tollemarche for Ham House. Other leading goldsmiths such as John Hugh le Sage and George Wickes supplied versions of this design well into the mid-1740s. []

The nozzles are later and attributed to Edward Farrell, one is marked for him. 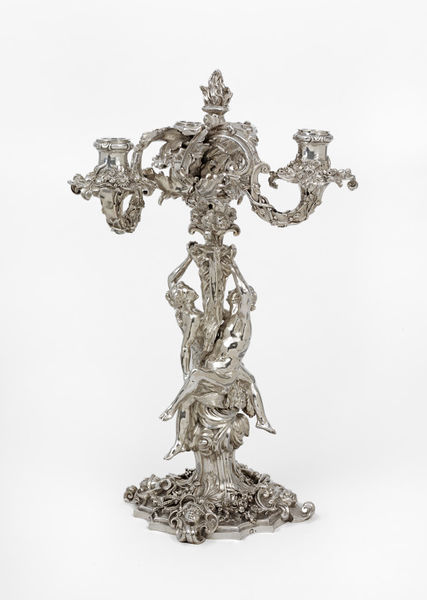