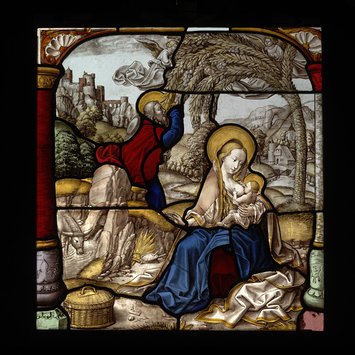 Rest on the Flight to Egypt, The

This panel is one of many in the V&A that comes from the cloisters at the Cistercian abbey of Mariawald, in Germany. Founded in 1480, the abbey was closed down in 1802. The stained glass windows had been removed and are believed to have been bought by John Christopher Hampp of Norwich. Many were subsequently purchased by Lord Brownlow and installed in his new chapel at Ashridge Park, Hertfordshire, between 1811 and 1831. In 1928 the contents of Ashridge Park were sold at auction. A private collector purchased the stained glass and gave it to the V&A.

Each cloister window was composed of two openings (‘lights’). Each light was composed of three large panels, plus one small tracery panel. So each window had eight panels. Two panels depicted scenes from the Old Testament and two panels scenes from the New Testament. Above the biblical story panels were two smaller prophet (or ‘messenger’) panels with half-images of Old Testament prophets. They held the biblical text relating to the Old and New Testament stories. At the base of each window were donor and patron saint panels. The donors helped finance the cloister glazing.

This type of narrative arrangement is known as ‘typological’. Each Old Testament story was a ‘type’ or a prefigurement of a New Testament story (‘antitype’). This panel shows the New Testament story of The Rest on the Flight to Egypt, when the Holy Family were warned by God to flee from King Herod. It was placed in the window just below that of an Old Testament scene which may have depicted the story of David fleeing from King Saul. Just as King Saul wished to kill David out of jealousy, King Herod tried to kill the child that was predicted to become 'King of the Jews'. Sadly, this panel does not seem to have survived.

Mary sits on the ground and breast feeds the Christ Child. Her right hand is extended over a small fire upon which there is a cooking tripod holding a bowl with a spoon. There appears to be a pottage type of substance cooking in the bowl. Behind her, Joseph is gathering dates from a tree and is assisted by angels. In the background are painted castle, town and landscapes scenes. The whole encased in an arch.

The Virgin wears a blue cloak with a red underskirt showing through; overall there is a white and gold overmantle. Joseph wears a red cloak over a blue tunic. The background scenes are painted in grisaille and silver stain. The columns at the sides are in red, purple, pale green and clear glass.

In the cloister of Mariawald until about 1802.
From about 1811 until 1928 it was installed in the Chapel at Ashridge Park, Hertfordshire.
(12 July 1928) Sold at Sotheby's.
The glazing of the Mariawald cloister, confined to ten windows on the west and north sides and one at the north end of the east walk, and made up entirely of two-light windows, seems to have started at the beginning of the second decade of the 16th century and probably continued until the early 1530s. From the surviving panels and the existing windows it can be seen that the programme was made up of paired Old and New Testament scenes arranged typologically one above the other (New Testament at the second level, Old Testament in the third), as in the Biblia Pauperum, with donor panels placed on the level below.

Believed to be from the third window in the cloisters at Mariawald.

During the Revolutionary struggles in France and the subsequent religious upheavals under Napoleon, many monastic institutions on the continent were 'secularised' and their buildings destroyed. The abbey of Mariawald was closed down in 1802 but fortunately its buildings, including the cloisters, remain largely intact. However, the stained glass windows had been removed and it is believed that they were purchased by John Christopher Hampp of Norwich. Hampp sold the Mariawald panels to various churches and to private collectors. Many of these were purchased by the collector, Lord Brownlow who had them installed in his new chapel at Ashridge Park in Hertfordshire between 1811 and 1831.

This panel is one of many in the V&A that comes from the cloisters at Mariawald. These panels come from ten windows on the west and north sides of the cloister, plus one from the north end of the eastern part. The glazing of these cloisters began about 1510 and seem to have been completed in the 1530s.

From the surviving stained glass panels we can determine the theme of the cloister glazing. Each window had two panels depicting scenes from the Old Testament and two panels with scenes from the New Testament. Above the biblical story panels, were two smaller prophet (or 'messenger') panels. These contained half-images of Old Testament prophets holding scrolls with text relating to biblical passages connected with the scenes below. At the base of each window were donor and patron saint panels. These donors were the ones who contributed to the financing of the cloister glazing.

The typological arrangement was popular in the Middle Ages. The stories were reproduced in manuscripts and in engravings from woodcuts and collectively became known as 'Biblia Pauperum' ('Bibles of the Poor'). At the end of the 15th century the Biblia Pauperum were printed in book form and sold in their thousands. These books were used as design sources for artworks including stained glass panels.

Clear, coloured and flashed glass with painted details and yellow (silver) stain. Depicting the Rest on the Flight to Egypt. From the cloisters of the abbey of Mariawald. Made in the workshop of Everhard Rensig or Gerhard Remisch. German (Lower Rhine), c.1522 to 1526.

From the cloister of the abbey at Mariawald. In the style of the Master of Saint Severin, Cologne. 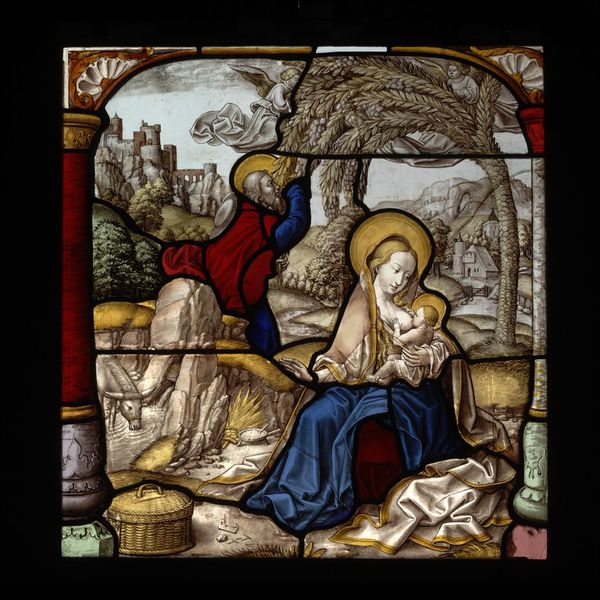