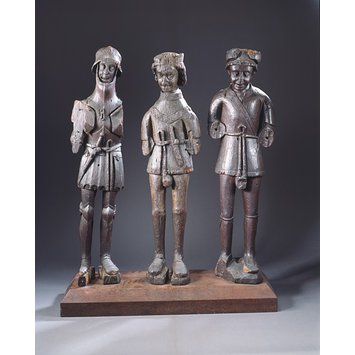 This unique figure almost certainly represents a young squire. Originally a squire was an apprentice knight, but by the 14th century, the term 'esquire' (from Old French 'esquier' from the Latin 'scutarius': a shield- or 'scutum'-bearer) was the term used to denote a man of noble birth, one wealthier than a gentleman, but less than a lord.
With two companion sculptures representing a knight and a man-at-arms, this figure would have been placed high on a screen in a great hall, still an important focus of noble living in this period. Linked to Kirkoswald Castle and Naworth Castle in Cumbria, they may once have held flags displaying heraldic devices of the Dacre family who owned both residences.

Oak figure of a youthful nobleman wearing a tunic and coronet. He wears a small hat, mantle of mail, tight-fitting 'jupon' trimmed with fur, on which a coat of arms would have been displayed, and the ubbiquitous kidney dagger at his waist. From the back of his belt hangs a purse or knapsack.

With his two companions (A.11 and A.12-2001), this figure provides a visual breakdown of the lesser nobility in later medieval England, and of the three ranks of nobleman generally to be found serving as henchmen in the retinues of more powerful lords. By the late 15th century, the gentry, or junior aristocracy, had become split clearly enough by writers, poets, artists, legislature and chivalric theorists into separate classes for a man such as for a man Sir John Paston (d.1503) to be able to grade to speak of the people at a 'Dwkys coort' as (in descending social order of precedence) 'knyts, sqwyirs, and gentyllmen' ('Sir John Paston's 'Grete Boke': A Descriptive Catalogue, with an Introduction, of British Library MS Lansdowne 285', ed. G. A. Lestor, Woodbridge, 1984, p.121). The figure and his two companion pieces are a sculptural representation of this order of precedence, that by 1400 or so had become the standard way in which the three most junior levels of nobility were described.

This figure almost certainly represents a young squire. Originally a squire was an apprentic knight, but by the 14th century, the term 'esquire' (from Old French 'esquier' from the Latin 'scutarius': a shield- or 'scutum'-bearer) was the term used to denote a man of noble birth, one wealthier than a gentleman, but less than a lord. This was the class of men from which the knights were drawn. As was the artistic custom of the day, the squire is shown as handsome, fashionably attired young man - harking back to a time when a squire really was a trainee knight, as opposed to a social rank in his own right. He wears a small hat, mantle of mail, tight-fitting 'jupon' trimmed with fur, on which a coat of arms would have been displayed, and the ubbiquitous kidney dagger at his waist. From the back of his belt hangs a purse or knapsack. Although the message is an anachronistic one, the imagery and dress is modern; the prominent cod-piece is another fashionable concession to contemporary trends. Being natty dresser was an important part of the visual stereotype of the squire. Chaucer's squire was the smartly dressed, good-looking young socialite; his knight is a more restrained, worldly, figure who has already sown his wild oats.

These figures must have once been displayed high up on a wall in the great hall of a castle, since their backs are flat and unworked, and their heads thrust forwards and they face downwards. In the hands they would perhaps have held lances from which heraldic banners hang, making the three figures a vehicle for the display of the coats of arms of the Dacres and their kin and, as military-themed stands for heraldic standards.

In brief, we see here a knight, squire and man-at-arms of gentlemen or franklin rank. Squires were originally apprentice knights, but by the 14th century the status of 'esquire' had solidified into a rank of its own, in keeping with a general trend towards stratification and the firming up and standardization of terms of social status. Esquire came to signify nobleman of sufficient status and wealth to be eligible for knighthood. The knights, squirearchy and those of serious substance were consistent in their use of armour and weaponry as a means to communicate their status.

But at the very bottom end of the nobility, the trickle-down diffusion of weaponry and military costume as motifs of social, political and economic power dried up before reaching the minor gentlemen. The lesser gentry, a medley of respectable pillars of parish life, were excluded from this circuit of martial values which elevated the image of the armoured man to stand for everything they held dear, that summed up precisely what it was to be noble. To be noble was to be, at heart, a warrior. Some of this was make-believe: as many gentlemen were soldiers at some time in their lives as esquires or those of knightly rank. What mattered was the expression of class status as easily defined visual categories. In short, full armour stood for a higher breed of noble, something deeper and more profound than simply a soldier. An aggressive, warlike spirit of an officer class lies beneath the smiles of these three far from ferocious-looking men.

Figure, oak, of a youthful nobleman standing and wearing a tunic and coronet, from Naworth Castle, Cumbria, England, ca. 1450-1470 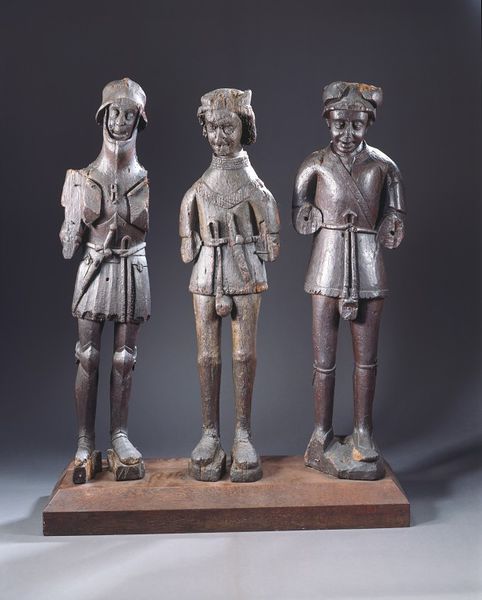