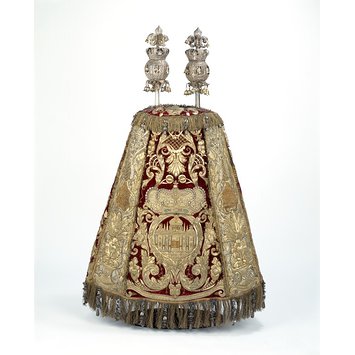 The most sacred object in the Jewish faith is the Torah scroll. It contains the first five books of the Bible (the Pentateuch) and is wound on rollers called the Trees of Life. For protection the scroll is put in a rigid case or covered by a cloth mantle. The rollers are topped with a single crown or a pair of finials called rimmonim ('pomegranates').

The scroll is kept in the Holy Ark (Aron ha-Kodesh), the focal point of the synagogue. On Sabbaths, Mondays, Thursdays and holy days it is taken out and read in front of the congregation.

This magnificent Torah mantle probably comes from the Sephardic synagogue in Amsterdam.

Mantle for a Torah Scroll. Silk velvet and silk brocaded with silver, embroidered with silver-gilt thread, twist, coil and purl with some silver inlaid and couched work; elaborately padded. Trimmed with a silver-gilt fringe and silver tassels. The whole mantle is magnificently decorated: on the front, within a large medallion, is a representation of the Aron ha-Kodesh [Ark of the Law] of the Sephardic synagogue in Amsterdam. At the back are two other medallions, one showing the harp, sceptre and crown to symbolise King David. The second depicts the breastplate, laver of brass, altar, Aaron's rod, shovels, flesh-hooks and firepans used in the sacrifices at the Temple in Jerusalem [see Exodus 27, 3]. All three medallions are surmounted by the Crown of the Law.

Length: 114.5 cm including fringe, Circumference: 206 cm around the lower hem

The mantle covers the Torah scroll, the most sacred object in the Jewish faith. It sits within the Holy Ark, which is the focal point of the synagogue. This mantle was probably made for the Portuguese synagogue in Amsterdam, then the largest in Europe. The Holy Ark can be seen in the central medallion, surmounted by the Crown of the Law.

Supported by the American Friends of the V&A through the generosity of The David Berg Foundation, New York [09.12.2015]

Believed to have been made for the Spanish-Portuguese [Sephardic] synagogue in Amsterdam. 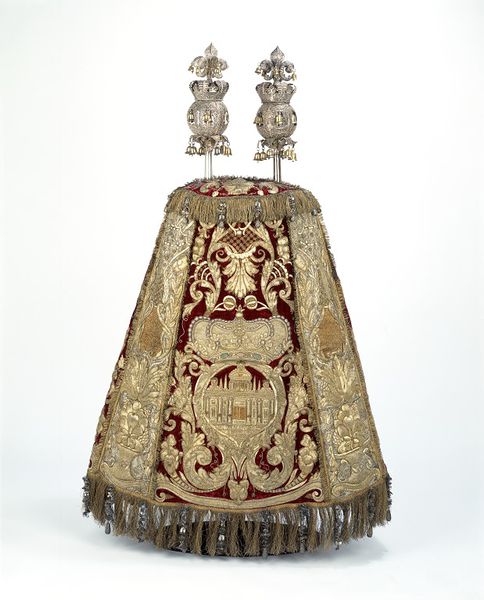