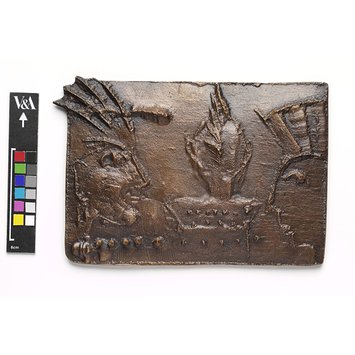 In contemporary medals the designer often questions the traditional concept of format, appearance and purpose. These medals are best appreciated when held and turned in the hand. Only this will reveal the intimate relationship of one side to other as intended by the artist. Fortunately contemporary medals are one of the most affordable art forms. The artist arrived in London from Poland in 1987 when Punk was a huge phenomenon. Her design is an outsider’s view of British culture but also a permanent record of a particular moment. Its projecting spikes embody the aggressive nature of Punk style and behaviour.

Bronze Plaquette.
Punks depicts three figures, a head only at each side in profile looking to the centre of the composition, and the third figure at the centre seen from behind. All three have recognisably Punk features including studded clothes, safety pin-pierced ears and 'Mohican' hairstyles (where the head is shaved except for a tall crest of hair at the centre). The hair of the figure at the left extends beyond the edge of the relief at the top left. The patination is a warm brown and the coppery bronze shines through at raised points of the composition to give emphasis to the spikey style. At the bottom left a series of 5 very sharp spikes, rising in height from the left to a maximum of 10 mm, project from the relief.

Vivienne Westwood; Two pairs of female legs; side view at the left - wearing stockings and high heel shoes; frontal at the centre, wearing calf-length boots. The figure at the centre is also shown wearing a fig leaf. This is a reference to a photograph of the fashion designer, Vivienne Westwood, with her skirts raised and without knickers, which appeared in the national press. Both sets of legs are treated with a pale, dusty finish and are set against a chased, seated background The artist's monogram of a raised 'S' in a circle appears at the top right The dates '1987/92' incuse, are written upwards from the bottom right hand corner.

Punks was made by the artist drawing free-hand in sand, plus the imprint of a little head (a motif which occurs frequently in her cast work) and then sand cast. The Vivienne Westwood side was modelled by the artist in wax. This entire piece was formal by the lost wax method in ceramic shell and was cast, at the request of the artist, by David Reid, who was based at Central St Martin's College of Art and Design.

Plaquette, bronze cast, Punks, by Danuta Solowiej-Wedderburn, made in London, 1987

The obverse, Punks, was created in 1987 and issued in an edition. The reverse, Vivienne Westwood, created in 1992, is unique and was combined by the artist with the obverse. 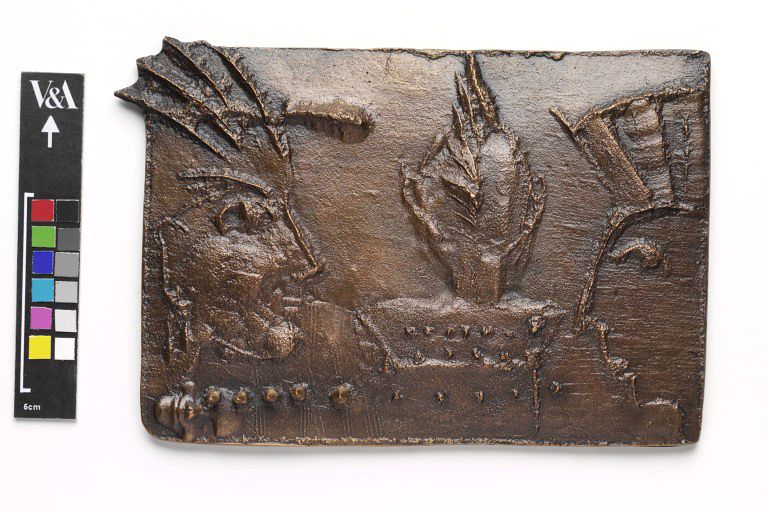