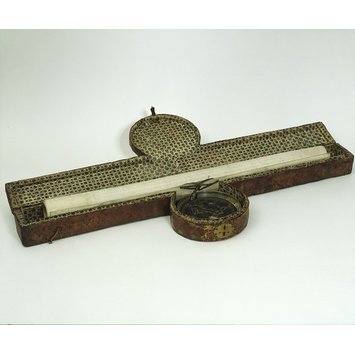 Object Type
The leather box was made specially to contain an important document, the Grant of deed of Arms of Earl of Abingdon. The granting of an earldom would have been of paramount importance to a family, particularly if it involved a promotion to higher rank. A special box was required to protect the precious document and its seal, without which the deed would not have been valid.

People
The Grant was made on 20 November 1682 to James Bertie, 5th Lord Norris (1653-1699). The document includes a portrait of Charles II, who reigned from 1660 to 1685. Abingdon was Lord Lieutenant of Oxfordshire from 1674 until 1687. Later, he offered financial support to William III, but he ended up opposing his accession to the throne and duly withdrew from the court.

Part of a large group of pieces of French furniture, ceramics, metalwork, books and other decorative arts, from the late Empire period and earlier, acquired in Paris by Sir Charles Stuart (from 1828 1st Lord Stuart de Rothesay) (1779-1845).The Empire furnishings were probably purchased during his first period as ambassador to Paris (1815-1824), the earlier furnishings during his second embassy (1828-1830). The Empire furnishings may have been intended for 4 Carlton House Terrace which he acquired in the late 1820s and moved into in 1834. Older pieces were probably purchased for his country house, Highcliffe Castle, Hampshire (now Dorset), which was re-modelled and enlarged in the most ambitious Gothic style from 1830-1834, with some work continuing throughout the 1830s. In 1841 the Carlton Terrace House was let. The family moved their London residence to Whitehall Yard. It was possibly in 1841 (or 1845, the date of Lord Stuart de Rothesay's death) that the Empire furnishings were moved to Highcliffe.
Lord Stuart de Rothesay's collections were inherited in 1845 by his wife Elisabeth, Lady Stuart de Rothesay (née Yorke). After her death, Highcliffe House and its contents passed to his second daughter, Louisa, Lady Waterford (1818-1891) who maintained Highcliffe. She left the house and its collections to her distant cousin, Major-General Edward Stuart Wortley (1857-1934). When his younger daughter Elizabeth ('Bettine') married Montagu Bertie, 8th Earl of Abingdon in 1928, he bought the castle and its contents from his father-in-law. The Abingdons sold Highcliffe and most of its contents in 1949 but retaineda number of pieces, including all those which later formed the Hole Bequest to the V&A. After her husband's death in 1963, Lady Abingdon lived much of the time with her close friends, Mr and Mrs Tahu Hole, to whom she bequeathed all her personal possessions on her death in 1978. Tahu Hole died in 1985 and a year later his widow Joyce approached the Museum and offered the collection as a bequest. She died in December 1986 and, in accordance with her will, the Museum chose those items that it wished to add to its collections. Other items from the collection were sold to benefit the Museum and the proceeds added to the funds bequeathed.

10 June 1986 Paul Davies
writes to say Mrs T R P Hole would like to offer her collection of Empire Furniture to the V & A. The furniture was originally the property of Lord Stuart de Rothesay, at Highcliffe Castle.

8 August 1986 letter Simon Jervis to Mrs Hole
thanking her for the opportunity to inspect her collection and remarking on the importance of the collection.

17 December 1986 Freshfields
advises V & A of Mrs Hole's death on 12 Dec. and of her substantial bequest to the museum.

Several departments prepared lists of objects recommended for acceptance. Part II of the R.P' contains a copy of Mrs Hole's will dated 8 September 1986.
R.P. Part I listed among many gifts as "Deed box …..leather, with seal & document".

The Grant was made on 20 November 1682 to James Bertie, 5th Lord Norris (1653-1699). The document includes a portrait of Charles II. Abingdon was Lord Lieutenant of Oxfordshire from 1674 until 1687. Later, he offered financial support to William III, but he ended up opposing his accession to the throne and duly withdrew from the court.

DOCUMENT CASE for a patent conferring a peerage,
About 1682

This case still contains the document (see photograph), for which it was originally made. It is a record of a title given by Charles II in 1682, and was therefore very valuable to its owner, James Bertie, 1st Earl of Abingdon (1653-1699). 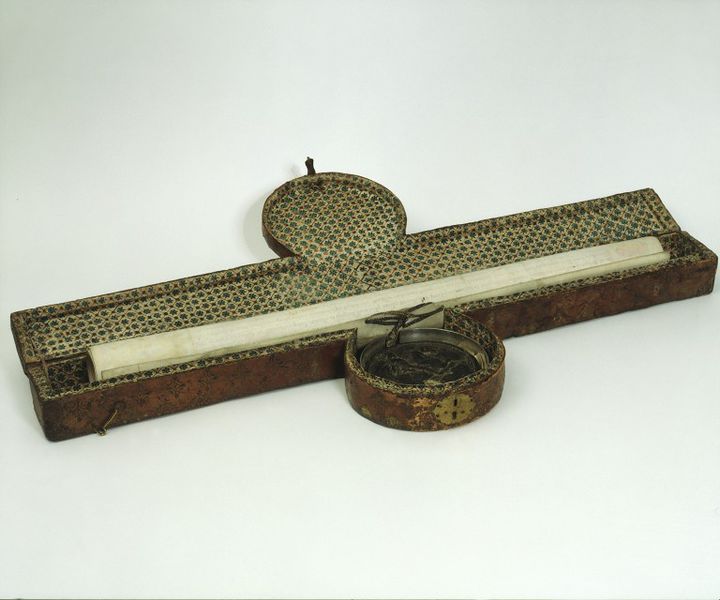