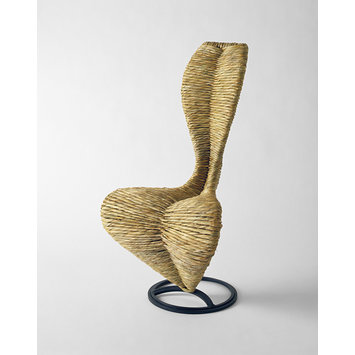 In 1985 Tom Dixon joined designers Nick Jones and Mark Brazier-Jones to form Creative Salvage, a group dedicated to producing furniture and decorative objects made from scrap metals. Their work with recycled materials was very influential on a generation of designer-makers. Dixon's favourite technique in the 1980s was welding and the frame of this chair is welded steel while the upholstery is made from rush. The rushwork here was done by a British basket-making firm. At this point in his career, Dixon did not use drawings, building the chair and altering and changing the design as it was developed in his studio. The name of the chair is a reference to its sinuous shape which is like the letter 'S'.

The frame of this chair was the original pattern for about 60 chairs made in Dixon's London workshop in the late 1980s. Subsequently, production was taken over by the Italian manufacturer Cappellini which introduced many variants of the S Chair.

Sculptural chair made from welded steel and rush. The framework of the chair is welded steel. The thick rush conceals the exact nature of the steel framework, but it is probably made from shaped rods. A narrow top rail connects two struts curving together to form a narrow back and wide seat. The struts meet together at the base where they are welded to a curved bar cast in one with the steel ring base. The chair framework is covered with natural rush caning apart from the steel base which is left exposed.

Thick rushes have been used rather than the more typical thin rushes. The rushes have been twisted together to form a long continuous length of thick cord-like caning which is wound round the frame in a figure-eight pattern. This creates a version of the traditional 'envelope' pattern, with a deep interlaced rib running almost the entire length of the seat where the caning crosses over. The reverse of this interlaced rib creates a triangular 'spine' down the back of the chair where the weight of a person sitting on the chair would depress the caning inwards.

The steel frame of the chair was originally a prototype made in 1987 without upholstery. When it was acquired in 1993 the designer arranged for adding the rush.

Welded steel frame, with rush seat
The rush used was identified by Fred Rumsey (Botanist- Identification and Advisory Service, Angela Marmont Centre for UK Biodiversity, The Natural History Museum) on 28 February 2012 as:
"The larger piece taken from the Tom Dixon S-Bend chair (W.6 -1993) is a very good match for Schoenoplectus lacustris (L.) Palla - Common Club-rush or Bulrush. Given its diameter this is the only native British species that it could be, although it could have been a large non-native member of the Cyperaceae imported for the purpose. The stem section however shows a considerable anatomical similarity to our S. lacustris specimens."

Tom Dixon has been making versions of the S-chair since the mid-1980s. The earliest ones were made by wrapping steel frames in rubber and plastic, although this example has been covered in rushwork, probably by an unidentified firm of basketmakers in Wandsworth who regularly caned chairs for Dixon in the early nineties. The thickly textured artisian rushwork distinguishes this chair from the commercially produced Cappellini versions (manufactured from 1991) which have tubular metal frames covered with wickerwork, woven reeds, leather, or fabric. The name of the chair is a reference to its sinuous shape which is like the letter 'S'.
This chair has a frame which is a prototype made in 1987. It was kept in Tom Dixon's studio until he was contacted in 1992 by V&A curators looking to acquire an example of his S-chair. As the prototype had no upholstery, a rush covering was added in Spring 1993.
There are no design sketches or drawings because Dixon's method of work is exclusively dedicated to largely full-scale models.

Historical significance: The S-chair is probably Tom Dixon's best known design. The metal frame still references the 'heavy metal' boom in the mid 1980s where Tom Dixon played an instrumental role as part of the group 'Creative Salvage'. However, not anymore 'found' but rather crafted object, the S-chair characterises a much more disciplined form which became Dixon's signature in the 1990s.

In 1985 Tom Dixon joined designers Nick Jones and Mark Brazier-Jones to form Creative Salvage, a group dedicated to producing furniture and decorative objects made from scrap metals. Their work with recycled materials was very influential on a generation of designer-makers. Dixon had had no formal training except lessons in welding, which is reflected in the welded steel framework of this chair. At this point in his career, Dixon did not use drawings, building the chair and altering and changing the design as it was developed in his studio. This steel frame served as the prototype for 60 models made in Dixon's London workshop. The woven rush upholstery was hand-done by a British basket-making firm who also did chair-caning.

The design was later sold to Cappellini, the Italian manufacturer. This chair was acquired as an example of Dixon's hand-finished work from his own workshops alongside an example of a mass-produced Cappellini-made 'Fat Chair' (see W.5-1993) with machine-made wicker-work.

'S' CHAIR
Designed and made by Tom Dixon (British, born 1959)
Welded steel frame with rush upholstery
1987 (upholstered 1993)
In 1985 Dixon joined Nick Jones and Mark Brazier-Jones to form Creative Salvage, a group dedicated to producing furniture and decorative objects made from crap metals. They were at the centre of the 'heavy metal' boom in the mid-80s and were much imitated. The frame of this highly finished chair was the original pattern for about 60 models made in Dixon's London workshop in the late 1980s, before the design was sold to the Italian manufacturer Cappellini. The rush upholstery was added prior to acquisition by the museum. Dixon recalls not only the form of Rietveld's zig-zag chair but Verner Panton's 1960s fibre-glass stacking chair. While these payed homage to technology and the power of the machine, the aesthetic of Dixon's chair is more organic. [April 1993]
‘S’ chair
1987
Tom Dixon (born 1959)

England (London)
Rush applied 1993 by an outside supplier

On this steel-framed chair, traditional rush techniques have been used to bold sculptural effect. Usually, only the seat is covered, but here rush wraps almost the whole frame, accentuating the ‘spine’, ‘lap’ and protruding ‘knees’ of the chair. The twisted rush cord is thicker than usual, giving a conspicuously textured effect. Earlier versions of the design were wrapped in rubber and plastic.
[01/12/2012]

In an interview on 29.11.1991 with a V&A curator, Tom Dixon referred to the rush being done by a firm of basketmakers in Wandsworth who also do rush chairs, but he did not specify which firm. 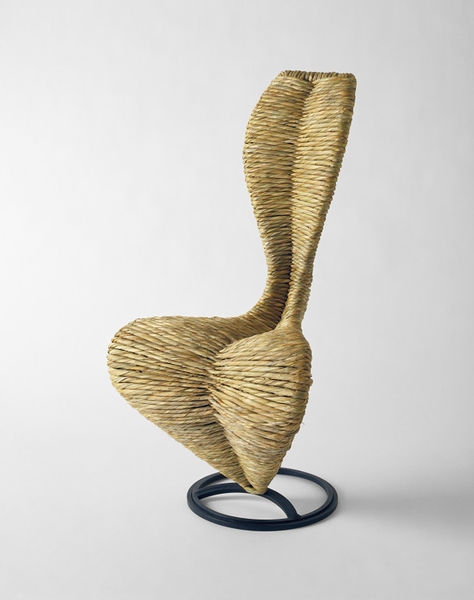