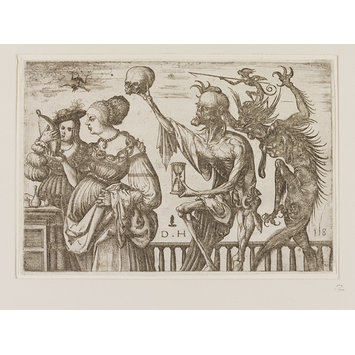 The plate from which this image was taken was etched between 1500 and 1510. Daniel Hopfer was possibly the earliest to experiment with etching in Europe, using iron or steel plates. This was a natural development from his usual employment as an armourer - etching developed in the Middle East for applying decoration to armour.

The technique involves coating a metal plate with an acid resistant substance and drawing through it using a needle to expose the metal. Acid is used to eat into the exposed lines. This allows for greater freedom with the lines than in engraving. Etching, for instance, allowed the black tonal area on the devil in this image to be made without using hatching. Later, in 1520, Lucas van Leyden experimented with combining etching with engraving, using copper plates instead of iron because the latter was too hard for engraving. Copper also proved a more satisfactory metal for etching, giving softer results.

In this image two vain and wealthy women are interrupted by Death and the Devil. This kind of subject was very popular and served as a reminder of mortality. The long tradition includes the story of the Three Living and Three Dead, in which three aristocratic men meet their dead selves (or sometimes dead churchmen) whilst out riding, and the Dance of Death, featuring Death in a sequence of dances with his victims (developed further by Holbein in 1538). All of them emphasise the fact that the victims' social status means nothing at the time of death.

Death and the Devil attack two women who are looking in a hand-held mirror. Death holds a skull and an hour glass. Another demon stands on the Devil's head brandishing a spear and another flies above the women. The women are expensively dressed in contemporary costume, head-dresses and jewellery and stand in front of a dressing table with bottles and pots.

D.H.
Signed on the plate

118
inscribed on the plate

Plate subsequently owned by David Funck, a Nuremberg bookseller (1642-1705) and distant relative of Daniel Hopfer, who numbered the plates and reprinted these under the title Operae Hopferianae. Hollstein: 'The iron plates of most of the works of Daniel.. Hopfer were rpeinted at least twice: in the seventeenth century (?) by David Funck at Nurember ... and in the nineteenth century by Silberberg at Frankfurt (1802).

David Funck, who lived in Nuremberg, acquired Daniel Hopfer's etched plates after his death, adding a number to each plate as seen here. 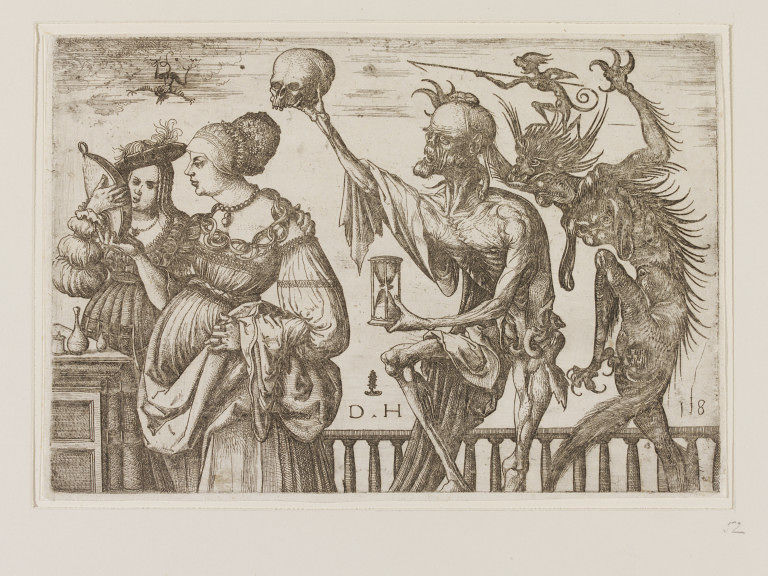