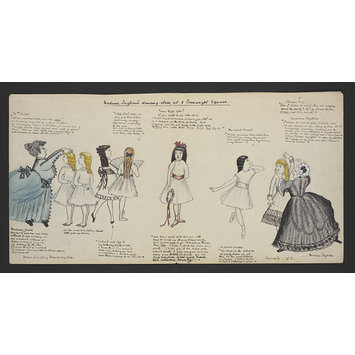 Far left a plump teacher, wearing a blue bustle, corrects a fair-haired girl, behind whom stands a 'twin'; walking away towards right, two dark-haired girls with fans; centre a dark-haired crying girl wearing a dress with pink sash and pink ribbon in her hair and holding a tambourine; next to her, a girl on point with left leg flexed behind right, her right hand to her mouth, as though whispering; at right, an old lady wearing a black dress and white cap, grips the chin of a fair-haired girl, standing with left arm down and right arm raised. Inscribed: "Madame Taglioni's dancing class, at 6 Connaught Square" and above each figure the conversation. Pencil, pen and ink, watercolour and crayon.

Pencil, pen and ink, watercolour and crayon on paper

Conversations
Textual information; Above and below each figure; Handwriting; Pen and ink

Historical significance: A rare image of the great Romantic ballerina, Marie Taglioni, in her later years. While Margaret Rolfe's work is amateur, it is a unique record of Taglioni's activities after she retired from the stage (usually summed up in the words 'she lost her fortune and was reduced to teaching social dancing in London') and provide insight into her character, teaching methods and dance classes in the second half of the 19th century.
The conversations recorded on the drawing, show that girls' behaviour and preoccupations have changed very little in the intervening century. 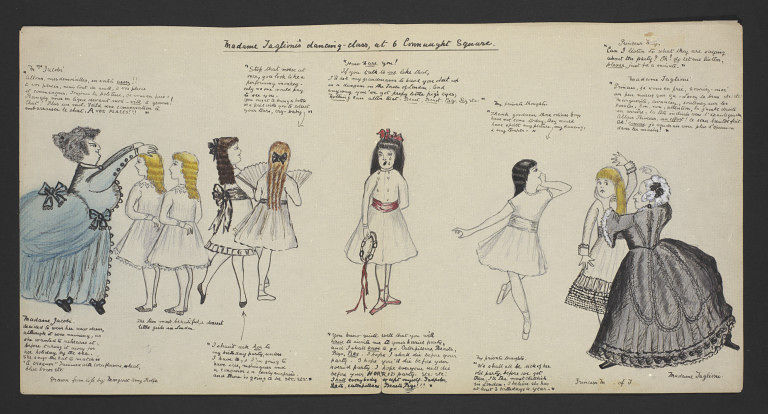