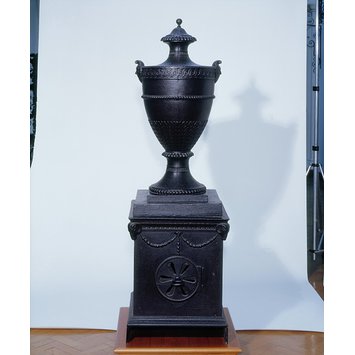 Object Type
Cast-iron stove in the form of a classical urn resting on an altar.

People
This stove was formerly at Compton Place in Sussex and it probably dates from Lord George Cavendish's refurbishment of the house in the 1780s. It was made by the Carron Iron Company and is likely to have been designed by Robert Adam. The Carron Iron Company was founded in 1759 near Falkirk, Stirlingshire, by John Roebuck, Samuel Garbett and William Cadell.

Trading
The Carron Iron Company sought to manufacture practical objects for the mass market using the most up-to-date designs, in this case by employing the Adam brothers. Making stoves and grates was a major part of the Carron Company's business, especially after Robert Adam had been enlisted to provide ornamental patterns.

Design & Designing
This stove demonstrates the elegance achievable in cast iron. Its design is very similar to a Carron Company drawing in the Scottish Record Office which has been attributed to Robert Adam and is replete with Neo-classical ornament in the Roman manner.

Made of cast iron, of classic form, an urn resting upon an altar. The urn, with two mask handles, is enriched with bands of guilloche, bead and leaf ornaments. The upper part of the altar is decorated with a leaf moulding and rams' head corners from which hang garlands. There is a hinged circular door in front.

The stove is from Compton Palace, Eastbourne.

Cast iron stove in the form of an urn resting upon an altar, possibly designed by Robert Adam, made by Carron Iron Co., Falkirk, ca. 1780

British Galleries:
The introduction of coke for smelting iron after 1750 made possible a huge increase in the production of cast iron. It also produced more enabled very much finer and deeper castings to be made. Cast iron was used for many functional yet decorative objects, such as fire grates and stoves. [27/03/2003]
STOVE
Cast iron
England; c. 1800-1820


Stoves became popular as an alternative means of heating to open fires in the late 18th century in England. This example, in the centre of the Gallery, comes from Compton Place, Eastbourne, Sussex. The decoration is in the Neo-classical style, and uses patterns and motifs taken from classical Greek and Roman decoration, such as the urn, plaited scrolls, rams' heads, garlands and bead and leaf ornament. The stove was probably designed by the architect Robert Adam (1728-92) and cast by the Carron Company of Falkirk, Scotland, a pioneering manufacturer of decorative cast iron. Similar stoves designed by Adam are at Kedleston Hall, Derbyshire. 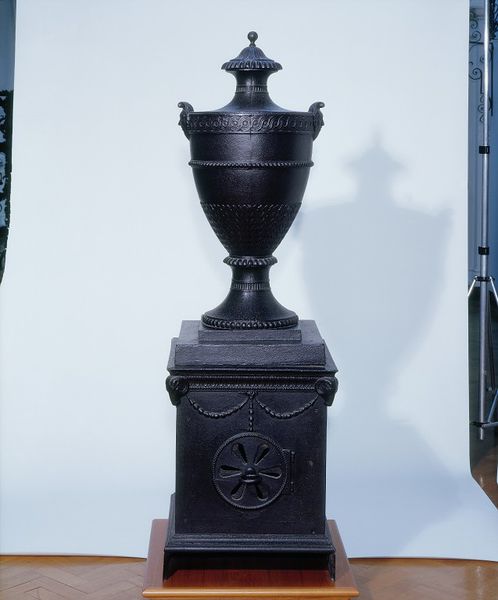