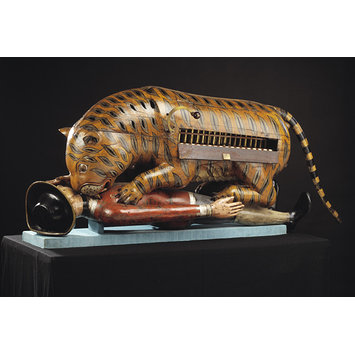 "Tippoo's Tiger" was made for Tipu Sultan, ruler of Mysore in South India (1782-1799). The almost life-size wooden semi-automaton consists of a tiger mauling a prostrate figure in European clothes. An organ is concealed inside the tiger's body, and when a handle at the side is turned, the organ can be played and the man's arm simultaneously lifts up and down. Intermittent noises are supposed to imitate the wails of the dying man.
The tiger was discovered by the British in the music room of Tipu Sultan's palace in his capital Srirangapatnam, known to the British as Seringapatam, after the Siege of Seringapatam in 1799. The invading army stormed through a breach in the ramparts and, in the ensuing chaos, Tipu and a great many of his soldiers, generals and the citizens of the town were killed. The victorious troops then rampaged through the city, looting valuables from the palace and from private houses, until Colonel Arthur Wellesley (later the Duke of Wellington) gave an order for hanging and flogging which quickly restored order. The contents of the royal treasury were then valued and divided between the men of the East India Company Army by the Prize Agents over the next weeks, in accordance with the conventional practice of the period. Some time later, the tiger was discovered in the music room of the palace and was shipped to London, where it arrived in 1800. It was sent to East India House, the headquarters of the East India Company which housed a library and new museum, and soon became one of the most popular exhibits. The Indian Museum, as it became known, moved several times before parts of the collection, including Tipu's tiger, were transferred to the South Kensington Museum, later renamed the Victoria and Albert Museum.
The circumstances in which Tipu Sultan commissioned the tiger are not known, and neither is the exact date when it was made. However, it was certainly in existence by 1792, when an English military artist called James Hunter drew it a few months before his death later in the year. The drawing seems not to have survived, but an engraving of it was reproduced in the book Review of the Origin, Progress, and Result of the Decisive War with the late Tippoo Sultaun in Mysore, London, 1800.

The painted wooden shell depicts a European man being savaged by a tiger. The man whose origins are confirmed by his clothes and hat lies on his back while the tiger sinks its teeth into his neck. When the handle on the side of the tiger is turned, the man's left forearm moves back and forth between his mouth and the tiger's ear, while bellows inside cause the animal to growl and the man to emit a plaintive whooping sound. A flap near the handle can be opened to reveal organ pipes and a keyboard with button keys of ivory.

In August 2001, Susan North of the Textiles & Dress Department provided the following description of the man's clothing:

Overall, it looks as though the inspiration is perhaps coming from dress of about 1750-1770s, rather than the most up-to-date styles of the 1790s, which isn't unusual given India's remove from the centres of European fashion.

One aspect that might have hampered the depiction is that the carving (with the exception of the hat) has not allowed for any three-dimensional aspect of dress, ie: coat tails, shirt frills, etc.

Overall, the man is wearing the typical coat, waistcoat and breeches of 18th c. dress. He also has white stockings and black shoes. His coat is rather short and has no sleeve cuff, but the opening down the front with a flat rendition of applied silver braid (of a 1750s or 1760s style) echoes the arrangement for buttons & buttonholes. Clare has given her views on the fabric [see below]. It certainly isn't 1790s or European, but men's coats of the 1750s & 1760s were often brocaded in floral patterns. I wonder if there isn't some melding with military uniform, with the red background and metal braid?

The pleated wrist may be a flat rendition of the fine pleated muslin frills popular from the 1780s onward. The black line around his neck calls to mind the 'solitaire' a black velvet ribbon worn around the stock in the 1750s & 1760s.

The hat is very informal for the 18th century, not the formal tricorne or chapeau bras. It looks like what was known as a 'wide-awake', with a low round crown and wide brim. It was becoming more fashionable for day wear from about the 1770s onwards, and may well have been worn more widely in India because it offered better protection from the sun.

Clare Browne of the Textile & Dress Department has provided the following:

The man's jacket is indeed curious, with floral sprigs all over the red ground. This doesn't correspond to any type of fabric I can think of that a fashionable Englishman (or even an unfashionable one) would have worn in the 1790s. He also seems to have a yellow waistcoat underneath, with red buttons, though it was difficult to make out exactly what was going on through the glass [of the case]. The coat has a funny series of white tabs down the front which don't appear to correspond to normal button and button hole arrangement, and his cuffs of pleated linen are also a bit of an oddity.
He reminds me of a 17th century English embroideress's attempt at an elephant at three removes from the original engraved source.

The object was commissioned by Tipu Sultan of Mysore in about 1790 and was housed in the music room of his palace at Srirangapatnam, known to the British as Seringapatam. In May 1799 Tipu was killed during the Siege of Seringapatam, and in 1800 the mechanical organ was despatched by Lord Wellesley to the Court of Directors of the East India Company in London. Wellesley had suggested the Tower of London as its final home, but the directors decided to retain it, and it was sent to East India House. In 1808 it was formally listed as part of the collection of the East India Library and Museum, but was on public display by at least 1803. In 1858, following the transfer of the Company's property to the Crown, it was temporarily stored in Fife House, Whitehall. In 1868 it was removed to the new India Office in King Charles Street, where it remained until 1874, in which year the India Museum was reinstalled in the newly built Eastern Exhibition Galleries in South Kensington (the site now occupied by Imperial College). In 1879 the Tiger was officially transferred to the Indian Section of the South Kensington Museum, and it was assigned its present Museum Number in 1880.
During the Second World War it sustained severe damage when workmen moving a plinth failed to notice the tiger on top of it. It was quickly repaired and put back on display. Between 1947 and 1956 it remained in the Eastern Galleries, apart from a short visit to New York in 1955. In 1956, in anticipation of the demolishing of the Indian Museum it was brought across the road to the Victoria and Albert Museum, where it has remained ever since.

Tipu Sultan commissioned this semi-automaton in the 1790s and kept it in the music room of his palace in Srirangapatnam. It was discovered by the invading army of the East India Company in 1799, and seized with all the contents of the palace and its treasury. The tiger was shipped to London in 1800 and displayed in the Company’s new Indian Museum in Leadenhall Street. Here, the almost life-sized beast mauling a European soldier confirmed the worst British prejudices about their arch enemy, whose name was usually spelt “Tippoo” in 19th century England. Visitors took ghoulish delight in turning the handle to make two mechanisms inside the tiger’s body produce sounds supposed to imitate the victim’s wails of agony and raise his arm, and played patriotic tunes on the keyboard of the internal organ. In 1879, the tiger was transferred to the South Kensington Museum, later renamed the Victoria and Albert Museum
[]
The life-sized automaton of carved and painted wood represents a tiger devouring a prostrate European in 1790s dress. A crank handle operates two mechanisms to move the man’s jointed arm and simulate roars and groans. A flap in the animal’s flank conceals an organ keyboard, stops and pipework. The casing suggests South Indian workmanship, while the works are of European origin. Musical toys were popular in contemporary Europe and many Indian rulers also collected them. The model belonged to Tipu Sultan, ‘the Tiger of Mysore’, an inveterate enemy of the British, who knew him as Tippoo Sahib. It came into the possession of the East India Company following his death in 1799 at the battle of Seringapatam.

Tipu Sultan was killed when the East India Company army stormed Seringapatam
in 1799. The soldiers looted the city and parts of the palace. Order was restored
after two days by hanging and flogging some of the looters. As was usual, the
royal treasury was then divided up between the army.
The wooden tiger with an organ inside its body was discovered in the palace’s
music room and shipped to London. As ‘Tippoo’s Tiger’ it became one of the most
popular exhibits in the Company’s new museum. When visitors turned the handle
at the side, noises were produced that supposedly imitated the European victim’s
dying wails of agony. The tiger came to South Kensington when the Indian
Museum’s collection was split up in 1879. [27/09/2013] 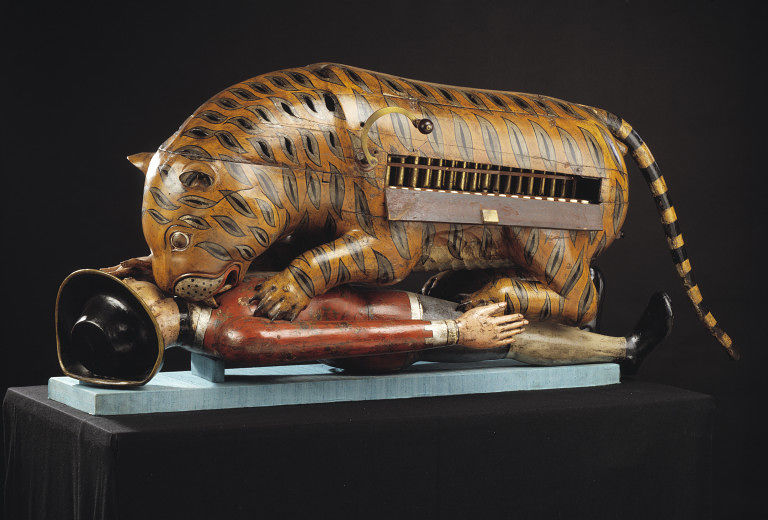