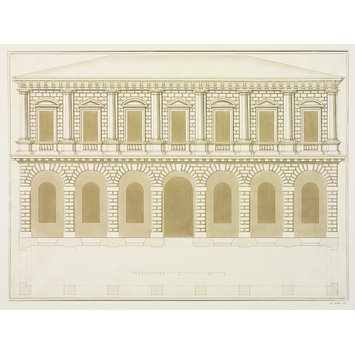 The drawing shows an elevation and a plan of the Prigioni Nuove (New Prison) in Venice, built in 1563 along Riva degli Schiavoni after the design of Giovanni Antonio Rusconi (ca.1500-1578) and completed later by Antonio Contin (1566-1600) and Tommaso Contin (1570-1634). The elevation is composed of two levels: a rusticated, seven-bay portico terminated by a dentilled cornice. A second level framed by an order of engaged, Doric columns on pedestals with alternating triangular and segmental pediments over the openings. The second order is topped by a simplified Doric entablature with corbels in the frieze in the manner of Leon Battista Alberti at Palazzo Rucellai. The plan describes the ground floor portico off Riva degli Schiavoni.

The drawing belongs to a set of 66 measured drawings of Italian Renaissance and Ancient Roman architecture which the V&A purchased from Edwin Parsons in 1886. The Parsons set may belong to a larger series of over 700 architectural drawings scattered in English and international collections formerly owned by the British Consul at Venice, Joseph Smith (1682-1770). A proponent of Palladian architecture, Smith began collecting measured drawings of classical and Renaissance architecture from the early 1740s. Today, most of this material exists in a series of bound volumes at the Royal Collection (where the Admiranda Artis Architecturae Varia is kept) and at the British Library (which holds the three-volume Admiranda Urbis Venetae), as well as in loose sheets scattered in collections across Europe and North America including the Royal Institute of British Architects and the Canadian Centre for Architecture.

The author of these drawings is unknown. However, their style and subject matter suggests the involvement of the Venetian architect, painter, engraver and theorist Antonio Visentini (1688-1782). A member of the Venetian Academy since its foundation in 1755, Visentini was affiliated with Smith and executed a vast number of architectural drawings for the British Consul as well as for a broader British collector base. Most of these drawings are scaled in English feet and consist of simplified plans and elevations of exemplary Italian architecture. Often produced as a series, the drawings were purchased by British Gentlemen to be included in their libraries and collections. The present drawing forms part of this material. The drawing is not signed by Visentini, but may have been produced by one of Visentini’s workshop members or pupils or by an unknown draughtsman working in the style of Visentini.

Elevation and plan of Le Prigioni Nuove in Venice, in pencil, pen and ink and brown wash, on paper. The drawing, in a landscape format, depicts the façade of the building seen from the Grand Canal with a plan of the ground floor portico below. A linear scale in English feet is inscribed in pen in the bottom centre of the sheet.

Pencil, pen and ink with brown wash on paper

Linear scale in English feet inscribed in pen in the bottom centre of the sheet.

The object was purchased from Edwin Parsons in 1886 as part of a collection of 66 drawings of Italian Renaissance and Ancient Roman architecture. Edwin Parsons was a dealer in books, prints and drawings. He was the founder of Edwin Parsons & Sons (1850-1950s) at 45 Brompton Road SW7. Parsons had a notable client base reportedly including the writer William Makepeace Thackeray, Sir John Pierpoint Morgan (of J.P. Morgan), and Napoleon III.

This drawing is one of two drawings of the Prigioni Nuove included in the E. Parsons series (see D.1437-1886) and is comparable to loose sheets at the Royal Collection (RCIN 919295), at the Royal Institute of British Architects (SB43[185]2) and at the Canadian Centre for Architecture (DR1985:0582) with which it shares the subject matter, the layout, the quality of draughtsmanship and the design of the linear scale. 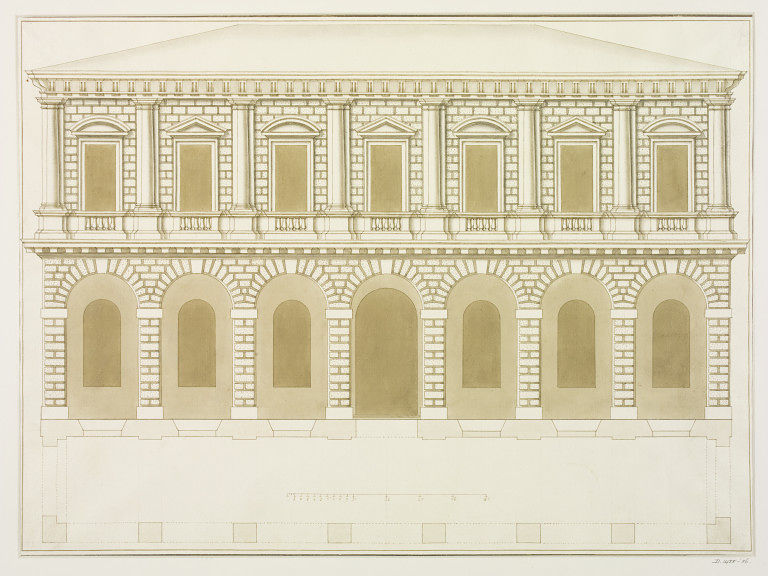