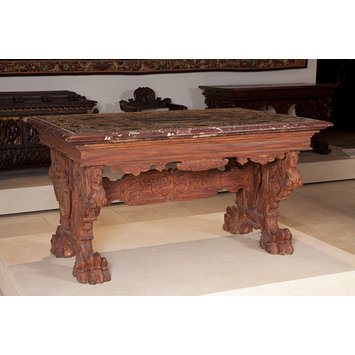 Rome has always had large stocks of ancient marble, from the remains of classical buldings. By about 1550, tables with tops inlaid with fragments of ancient marble were being made to furnish residences such as the Villa Giulia and Palazzo Farnese. The V & A's table can be compared with the famous marble table, originally from the Palazzo Farnese and now in the Metropolitan Museum, New York. Tables like these were made up of a central piece of antique marble surrounded by borders of modern semi-precious stones, cut into abstract patterns. The technique was known as commesso (literally 'joined together) in Rome, and as pietre dure (literally 'hard stones'), its more widespread name, in Florence. A number of pietre dure table tops have survived but very few retain their original supports, as this one does. This table is an excellent example of a museum purchase made with the aid of the connoisseurship of Sir John Charles Robinson (1824 - 1913). He was largely responsible for building up the early collections of the South Kensington (now Victoria & Albert) Museum until 1867.

Table with rectangular marble top inlaid with pietre dure stones and rosso antico marble frame, resting on gilt brackets in the form of female terms ending in massive lion's feet, placed back to back and linked to each other with a gilt stretcher. The table top is composed of pieces of marble and semi-precious stones set in a rectangular frame of rosso antico marble. The outer border consists of pieces of agate set in strapwork frames of breccia on a verde antico marble ground. In the centre of the inner rectangle is placed an oval piece of porphy set in a strapwork cartouche of breccia, with strapwork borders of chalcedony and peltae of porphyry in the corners.

This marble top rests on a rectangular frame, which is supported by thick square stiles placed between the two female herm brackets at each end, and terminating in a square acanthus boss. On the outside of each bracket is placed the same unidentified coat of arms. The brackets are linked to each other with a stretcher, in the form of two 'C' scroll cartouches in the centre and two flattened balusters at the sides.

The frame was gilded when acquired by the V&A but investigation in 2009 suggested that it had been applied in the 19th century. The gilding was therefore removed to reveal a red painted surface imitating red marble, with fine carving. Traces of oxidised copper indicated that the table had been bronzed at a later date, but before the gilding. Traces of earlier gilding are found on one of the ducal cornotets on the side of the table, placed above the arms. The coronet and heraldic tree, which was bare wood underneath the gilding, were both added at different times.

The South Kensington Museum bought this table for £48 - 10 - 0 (£48.50) at an auction at Christie's , 18th January 1881 (lot 313). It was spotted by John Charles Robinson (1824 - 1913), former Superintendant of Art at the museum. Robinson prided himself in getting them at a relatively modest price, owing to a severe snow storm that day, that deterred other dealers (etc.) from showing up.

The heraldic tree on the frame is the emblem of the Baciocchi, an impoverished Corsica noble family elebvated to the dukedom of Lucca and Piombino in 1805, after Felix Baciocchi (1762-1841) had married Napoleon's sister, Elisa Bonaparte (1777-1820) in 1797. The heraldic tree and the coronet could be later additions carried out after Bacicchi became a duke. It is not known when the table was in the possession of the family. The later provenance of the table is not known until it appeared on the London art market in 1881.

Historical significance: A number of pietre dure table tops have survived but very few retain their original supports, like this one. This table was most likely made in Rome and would have been regarded as a highly prestigeous and prominently displayed piece of furniture, destined for a state appartment of a grand house. No doubt inspired by examples such as this, Grand Duke Ferdinando I (reigned 1587 - 1609), who had been a cardinal in Rome, returned to Florence in 1588 to set up a factory to produce similar items, which were to become the finest of their sort. At the same time, this purchase of this table is an excellent example of the connoisseurship of Sir John Charles Robinson (1824 - 1913), who had been largely responsible for building up the early collections of the South Kensington (now Victoria & Albert) Museum until 1867.

Peter Thornton (1971) published this table as Florentine, comparing the base to designs by Barnardo Buontalenti, and remarking on the impressive effects that the first hardstone products from the Medici workshops must have created, and noting that Francesco I dei Medici brought specialist workers from Milan to Florence from 1588. He thought that this table must date from the early phase of Medici workshop production, given the relative simplicity of the design.

Rome has always had large stocks of ancient marble, from the remains of classical buldings. By about 1550, tables with inlaid marble tops were being made to furnish Roman residences such as the Villa Giulia and the Palazzo Farnese which became very fashionable.
From the latter residence came the famous marble table, now in the Metropolitan Museum, New York, thought to have designed by Jacopo Barozzi da Vignola (1507-73). Such tables were made up of a central piece of antique marble surrounded by borders of modern semi-precious stones, cut into abstract patterns. The technique was known as commesso (literally 'joined together) in Rome, and as pietre dure (literally 'hard stones) in Florence.

TABLE
ITALIAN (Rome); about 1580
The top inlaid with various marbles: the frame of gilt wood
The frame of this table probably derived from a marble base in the Odescalchi Collection, Rome which is slightly earlier in date. The top inlaid with marbles is probably also Roman: it may be compared to that on the celebrated piece from the Farnese Palace now in the Metropolitan Museum, New York, whose design is attributed to Jacopo Barozzi da Vignola (1507-73). The frames of these tables were based on ancient Roman examples which enjoyed a further period of influence around 1800. [pre July 2001] 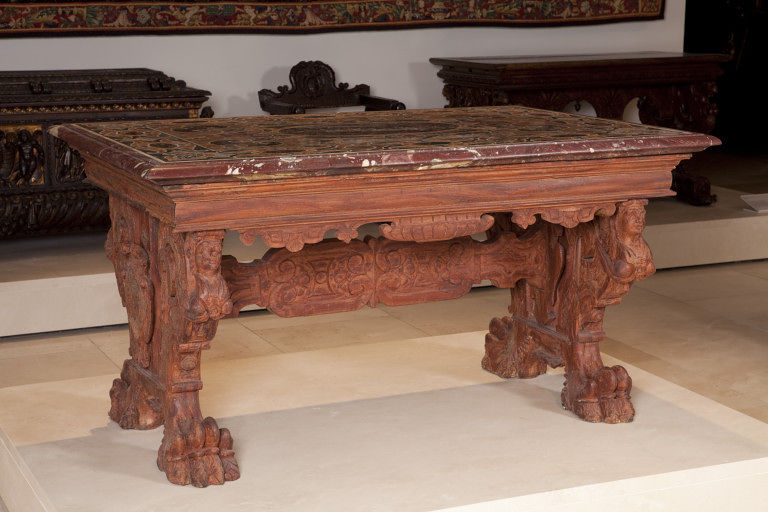