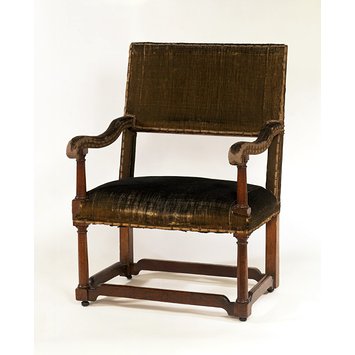 This armchair came from Boughton House, the palatial Northamptonshire home of the Montagus. Although radically re-modelled by Ralph, 1st Duke of Montagu, from about 1685, the house has much earlier origins, and this armchair almost certainly dates from before the 1st Duke's time. However, the chair itself appears to have been re-modelled in the early 18th century: the oak bottom stretchers and the castors were probably added then, and the legs were perhaps cut down at the bottom. The present upholstery, in a green wool velvet, is probably also from the early 18th century. The original covers seem to have been leather, which partly survives on the back face of the chair-back.

An armchair with low rectangular back, raised above the square seat, scrolled sloping arms supported on plain baluster front stiles, and plain arched stretchers - the seat, back and arms covered in green wool velvet. The front stiles are walnut, but the bottom stretchers are oak - evidently a later addition or replacement. All four feet are fitted with metal (darkened brass?) castors, with laminated leather rollers (seemingly 18th-century).

The back-frame, seat-frame and probably the arm-supports are beech (the arm-supports rather obscured by netting over the velvet). Beech is also used for two nailed-on open braces at the front corners of the seat-frame, which are probably 18th-century additions.

The green wool velvet covers are trimmed with a plain cream linen(?) braid fixed with space nailing (the nail heads 3/8 inch, or 9mm, in diameter). The velvet is about 22 in. wide between the seams (on the back 21¾ in., or 55 cm. wide; on the seat 22¼, or 56.5 cm. wide). It is fixed to the back of the frame with old, faceted nails, quite rusted, but there appear to be holes for another cover on the back face of the back stiles. On the outside-back a torn leather cover is fixed to a canvas lining, the whole surface now varnished over. So the original cover may have been leather.

Given by His Grace the Duke of Buccleuch.
'Pieces missing, requires recovering'.
Letter to the Duke from Cecil Harcourt Smith, 10/7/1918 makes it clear that the items (W.26 to 34-1918, described as coming 'from Boughton' were in a somewhat deteriorated state: '...I have very little doubt that our skilled repairers will be able to treat them in such a way that they will be extremely valuable to our students here..I expect the necessary work for the furniture will occupy a considerable time...'

This basically mid-17th-century chair appears to have been altered in the early 18th century. The oak bottom stretchers cannot have been combined originally with the walnut front stiles (legs and integral arm-supports), nor are they of a 17th-century form. Their arch-ended shape reflects early 18th-century forms inspired by Chinese furniture, and this is probably the best clue to the specific date of the alteration. The castors, with laminated leather rollers, must be 18th-century too, and the open braces nailed to the front corners of the seat-frame are also a typical 18th-century usage (and not characteristic of 17th-century construction).

The upholstery was probably renewed at the same time. Originally the chair seems to have had leather covers, the remains of which are still to be seen on the outside-back. The present upholstery -- from the striped webbing to the wool-velvet cover and space-nailed braid -- is probably all of the same early 18th-century date.

ARMCHAIR
Walnut, beech and oak. The upholstery is not original
ENGLISH; about 1650

From Boughton House, Northamptonshire. The original upholstery was probably of red velvet, and would have been fringed. 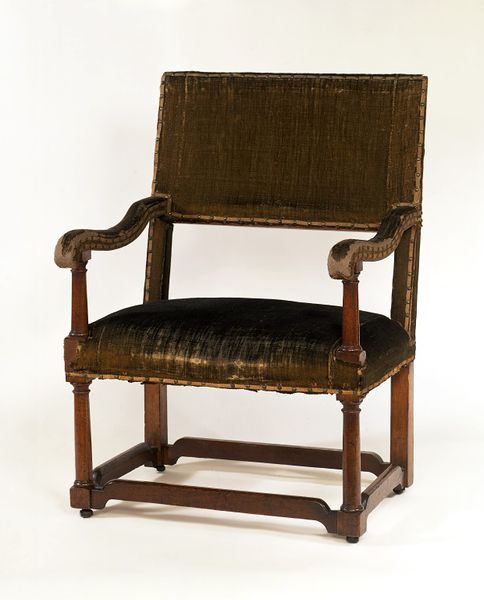