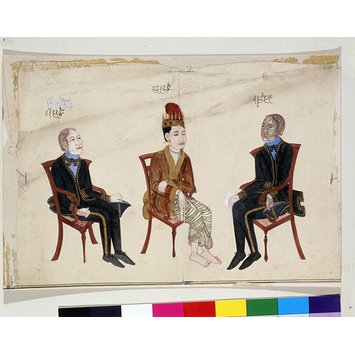 One of three drawings recording the mission of friendship led by Sir Arthur Phayre and his meeting with the envoy of King Mindon of Burma in Calcutta, 1854.

At the end of 1854, following the second Anglo-Burmese war of 1852, after which southern Burma fell to British rule, the Burmese King, Mindon Min (r. 1853-1878), sent his ambassador Ashin Nanmadaw Payawun Mingyi on an embassy of good will from his court at Amarapura to the Governor-General of India, Lord Dalhousie, in Calcutta. Sir Arthur Phayre, Commissioner of British Burma, accompanied the mission and acted as interpreter.

These three watercolours, which were presented to the Victoria and Albert Museum by the great niece of Sir Arthur Phayre, allow us to witness the pomp with which Burmese ministers travelled through the eyes of a Burmese court artist, who accompanied the mission.

Here at their first meeting, the ambassador sits with Sir Arthur Phayre and another British envoy on European-style chairs. He is splendidly portrayed in his civil court dress consisting of a wutlon (long gold decorated robe) over a pahsoe (a type of sarong) of acheik luntaya silk together with a bon (high domed hat with applied gilt foil). These robes would have been one of two sets presented to the minister on his appointment, with a full set of accessories and in accordance with strict sumptuary laws, the other being amyee-toe myee-shay (military court robe). Phayre and the other British envoy are portrayed in tight trousers and tail coat, in approximation of mid-Victorian court dress.

The Burmese envoy, with Sir Arthur Phayre and another British envoy, sitting on European-style chairs. Inscribed with numbers in Burmese script above the heads of the three figures.
The Burmese official is portrayed with his salwe (gold chain of honour) in court dress consisting of a watlum (long gold decorated robe) over a pah-soe (type of sarong) of acheik-luntaya silk together with a bon (high domed hat with applied gilt foil).

Phayre and the other envoy are portrayed in approximations of mid Victorian court dress - tight trousers and tail coat.

inscribed with numbers in Burmese script above the heads of the three figures.
Inscribed:

Although the artist of these three paintings (see also Museum nos. IS.180-1950 and IS.181-1950) is unknown, Noel Singer in 2002 states that they are without doubt the work of a Burmese panchee-daw (court artist) who was probably taken on the mission to Calcutta in 1854. Mildred Archer in "Company Paintings" (see Ref. below) was also of the opinion that they were executed by a Burmese artist.

Previously considered illustrations recording Sir Arthur Phayre's mission to Mandalay in 1855. When Mildred Archer had the Burmese inscriptions above the paintings translated by U Tin Pe of the Burmese Embassy in London they were re-attributed to the earlier mission in December 1854 led by the Chief Queen's Ambassador Ashin Nanmadaw Payawun Mingyi from the Court of Mindon to Calcutta. 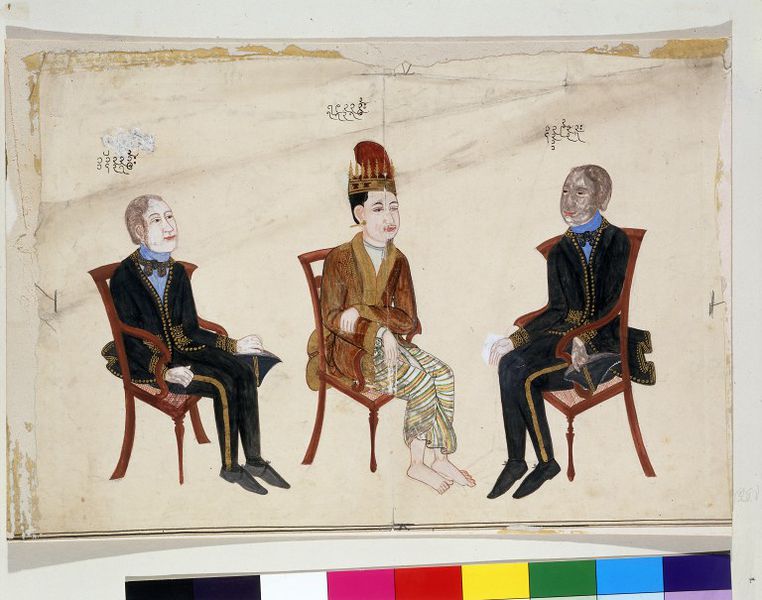