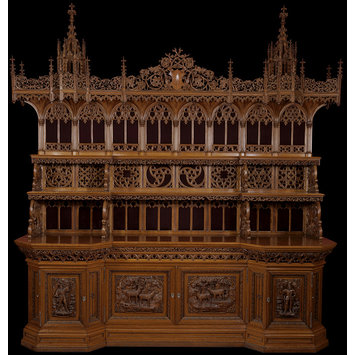 This sideboard was designed by Ferdinand Rothbart (1823-1899) and a now-unknown collaborator called Th. Kolb and was manufactured by Thomas Hoffmeister and Thomas Behrens in Coburg, Germany in about 1851. It was part of a group of objects, including four chairs, commissioned by the Duchy of Saxe-Coburg. The group was shown in London at the Great Exhibition of 1851 and was acquired by Prince Albert, an appropriate acquisition as he was a member of the house of Saxe-Coburg and was brought up in Coburg.

Described in 1851 as being ‘in the German-Gothic style of the middle ages’, the gothic features used include pointed arches and repeated motifs similar to the tracery of windows found in gothic cathedrals. The carving on the panels on the doors have a hunting theme: the central two doors, each showing a group of deer in a woodland setting, are flanked by figures of men with spears, knives and bugles. The carved panels on the left and right sides of the sideboard show a boar and a bear in similar woodland settings.

The sideboard may have been intended finally for the furnishing of Balmoral, the royal holiday house in the Highlands of Scotland. It was almost immediately sent to the Palace of Holyroodhouse in Edinburgh, where it is shown (with two chairs by the same makers, now in the collections of the V&A, W.10-1967) in the Evening Drawing Room. It remained there until 1923, when it was given to the University of Edinburgh who gave it to the Museum in 1967

A sideboard or buffet of carved oak in the Gothic style. The lower section is rectangular with outset sections at the ends with chamfered front corners, above a moulded plinth. It is set with four doors carved with deer on the central doors and with huntsmen on the doors of the outer sections. The side panels of this lower section are carved with a wild boar on the left-hand side and with a wild bear on the right-hand end. The frieze of this lower section is a reverse ogee in section, carved and pierced, with a running arcaded motif below a serpentine run of foliage, set proud of a background covered with red plush.

The superstructure of the buffet consists of three tiers of pierced arcading, the central tier carved as a series of rose windows, below a continuous canopy, with gothic vaulting below and a carved and pierced cresting in gothic style above. The tracery of the lower tiers are missing, showing the red plush background crudely nailed to the ground. The back of the superstructure is lined with red plush (now faded to brown), against which the pierced carving is designed to be seen. The superstructure is set with two narrow shelves, the edges with aprons of carved and pierced running foliage. The shelves are jointed into the back panel of the superstructure and are each supported by four scrolling, pierced brackets, two at either end and two at either side of the central section. These are carved with fanciful birds (each different). The shelves and the canopy above break forward over the outer sections and the canopy is finished above each side section with a carved and pierced gothic finial of complex architectural form, the centre of the front of the canopy showing a rising cresting with a central shield.

VR
HP
1859
Branded once on the back of the centre section, behind left-hand end and 3 times on the back surface of the frieze of the lower section. Inventory mark for Palace of Holyroodhouse.

3841
Paper label inscribed in ink, set beside brand on frieze of lower tier behind left-hand side of sideboard.

R3
Branded on the back board, in the centre, at the frieze height of the lower section

This cabinet, together with four chairs by Hoffmeister & Behrens (W.10toC-1967) were shown at the Great Exhibition in 1851, the most admired piece that was sent from Coburg was this sideboard, which received an ‘Honourable Mention’ from the Juries. The sideboard was designed with the help of the Coburg court artist Ferdinand Rothbart (1823-1899) and a designer or artist named Th. Kolb about whom nothing is now known. It was made by Thomas Hoffmeister and Theodor Behrens.

The sideboard and chairs were acquired by Prince Albert. They may have been intended to furnish Balmoral, which was in the process of purchase at that time and was later re-modelled, but they seem never to have got further than the Palace of Holyroodhouse in Edinburgh. The related chairs carry an inventory brand for the Palace of Holyrood in 1859. The sideboard and two of the chairs are shown in a watercolour of c. 1863 by George Greig (c. 1820-1867), in the Evening Drawing Room (only two chairs shown, flanking the sideboard). The water-colour shows two women in mourning, possibly for the death of Prince Albert in 1861.

The pieces remained at Holyrood until 1923 when, after a correspondence between the Duke of Atholl and Professor Stebbing, they were given by King George V to Professor Stebbing for us at the Department of Forestry, University of Edinburgh at 10 George Square, Edinburgh.

In 1967, re-development of the University meant that the Department of Forestry no longer wished to house the pieces and they were offered to the V&A.

Sideboard of carved oak, in gothic revival style, the doors of the lower section carved with deer and huntsmen, the tiered superstructure carve with gothic ornament, some pierced and showing against a ground of red plush.

The Duchy of Saxe-Coburg showed this sideboard at the London 1851 Great Exhibition, and it was later presented to Queen Victoria and Prince Albert, an appropriate gesture as he was a member of the house of Saxe-Coburg and was brought up in Coburg. 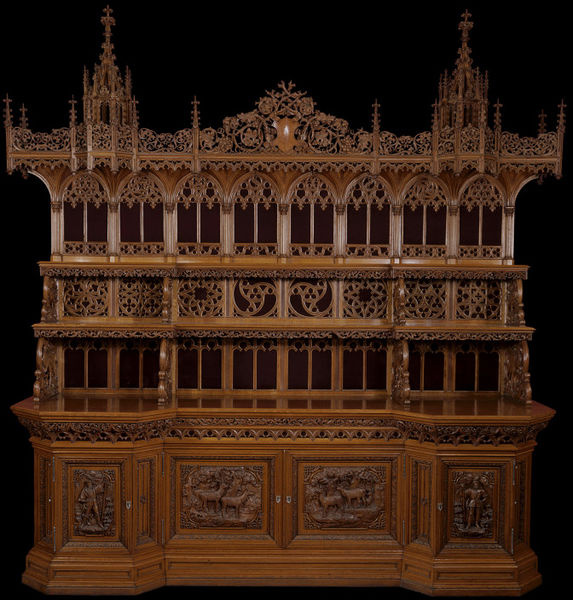