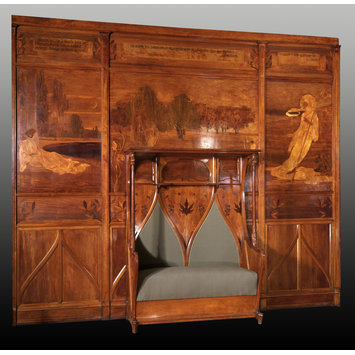 The Alsatian painter Carl (or Charles) Spindler began to produce marquetry pictures in 1893. He avoided the use of staining to achieve colour, or scorching the edges of pieces to give shading and suggest a three-dimensional effect. Instead he used different woods to create the details of his pictures and ornamental designs. He exploited not only the different colours of woods but also the wide variety of their grain. His furniture design was much influenced by the ideas of the more famous French designer Emile Gallé, who also worked in the Alsace region and believed in nature as a source of inspiration.

Alsace was on the borders of France and Germany and in 1900 was under German rule, though there was a strong local movement to reunite Alsace with France. The inscription at the top of this panel is in French and is taken from one of the legends of Alsace, the story of the White Lady of Pixbourg.

This panelling, part of a music room displayed at the Paris International Exhibition in 1900, won not only a German Grand Prix but also a French Silver Medal.

Section of panelling from a Music Room, of walnut with panels of marquetry of a variety of woods between moulded framing rails of walnut. The lowest section of the panelling is veneered in walnut with applied mouldings of walnut forming an ogee arch. Above this, is a broad horizontal dado of marquetry of leaves. Above is the main panel of marquetry showing a scene of a woman seated on the ground beside water and in front of trees. The top panel of marquetry shows a scroll inscribed (in marquetry) 'Aux nuits de l'esté la blanche dame de Pixbourg descend dans la vallée et attend son chevalier qui jamais ne vient'.

Walnut, with marquetry of walnut, pearwood, tulipwood, maple, amboyna, purpleheart, sycamore and kingwood on a ground of poplar, veneered on the back with oak

Exhibited at the Paris International Exhibition 1900

Panelling of walnut and marquetry of several woods, with a main panel depicting the legend of the White Lady of Pixbourg

The painter Spindler began to produce marquetry pictures in 1893. His marquetry style was influenced by the Swiss painter Arnold Böcklin (1827-1901), while his furniture is indebted to advanced German designers such as Bruno Paul (1874-1968) and Joseph Olbrich (1867-1908). Against these must be set the influence of Emile Gallé (1846-1904) and other Nancy designers. His music room was awarded a German Grand Prix and a French silver medal when shown at the Paris 1900 Exhibition.

Given by Sir George Donaldson [pre 1990] 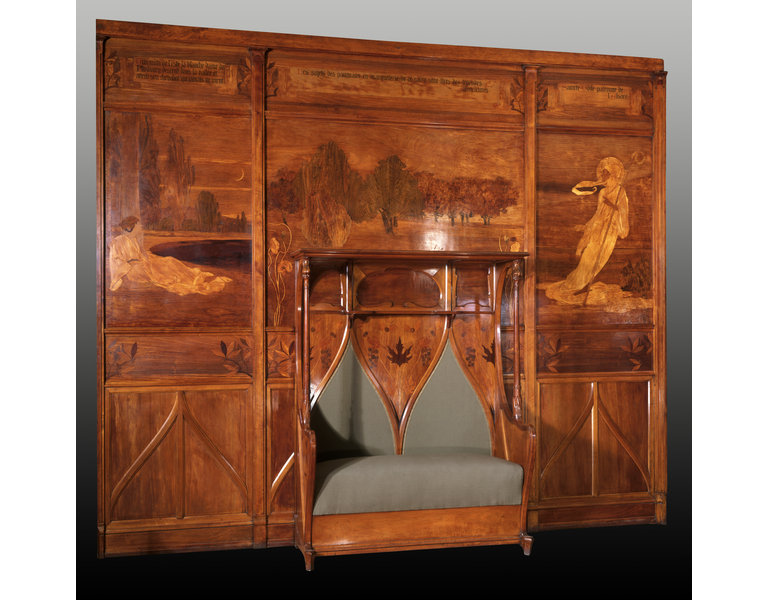