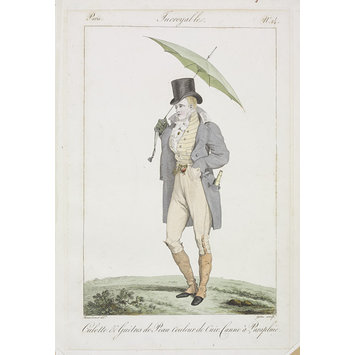 The Incroyable et Merveilleuse plates are particularly valuable as a record of men's fashion. This image is particularly well-known because it is a rare early image of a fashionably dressed man carrying and using an umbrella. The caption indicates that the umbrella furls into a tight roll, enabling it to be carried as a cane when not required. Also interesting are the man's leather gaiters, which strap under the instep of his shoes and have tabs which fasten over the buttons securing his buff leather breeches. He wears a blue coat over a yellow waistcoat striped in blue, unbuttoned to reveal a ruffled shirt front and carefully arranged neck-cloth. At his waist is a fob-seal attached to a gold chain, and a telescope can be seen sticking out of his coat-pocket, while his hand is in the pocket of his breeches. His top-hat is a quite early example of its kind, as such hats only began being produced in the very late 18th century.

The Incroyable et Merveilleuse plates are particularly valuable as a record of men's fashion. This image is particularly well-known for being a rare early image of a fashionably dressed man carrying and using an umbrella. The caption indicates that the umbrella furls into a tight roll, enabling it to be carried as a cane when not required. Another interesting detail in this image is the leather gaiters, which strap under the instep and have tabs that button onto the buttons fastening the wearer's buff leather knee-breeches.

This is also one of the earliest known illustrations to clearly depict an early top-hat with the cylindrical form and high crown, rather than one of the late eighteenth century sugar-loaf shaped hats or other transitional forms. Up until the mid-nineteenth century, all such hats were known as "silk hats" or "beaver hats", with the earliest citations for the term "top hat" in the Oxford English Dictionary dating from the 1880s.

Regardless of when the term came into usage, the form of hat that would become known as a top-hat was certainly first created during the very late eighteenth century, and had become quite widely produced by the 1810s. There are several stories about the origins of the top-hat, including the apocryphal story about a haberdasher called John Hetherington who is alleged to have caused a riot simply by wearing "a tall silk hat" in London in early January 1797, for which he was fined either £50 or £500 according to different versions. The Hetherington story first appears in print in the 1920s, attributed to a 1797 edition of the Hatter's Gazette - which was not launched until 1878. Despite being almost certainly an urban myth, Hetherington's story has often been cited as fact in many publications and articles since then.

One hatter who has been linked to early top hats is George Dunnage of Middlesex, England, who in 1793 was reported to have produced a silk shag (plush) hat in imitation of the beaver fur felt hats. Although it requires further research to verify, Dunnage's silk hat described as "imitation of beaver" would appear to be one of the earliest examples of the silk hat in England. Dunnage and his business partner, Thomas Larkin, manufactured silk hats as Dunnage & Larkin until the partnership dissolved in 1818.

Regardless of whatever it was called at the time, the cylindrical, high-crowned hat worn by this Incroyable does appear to be an early form of a hat whose immediately recognisable style will always be associated with the 19th century. 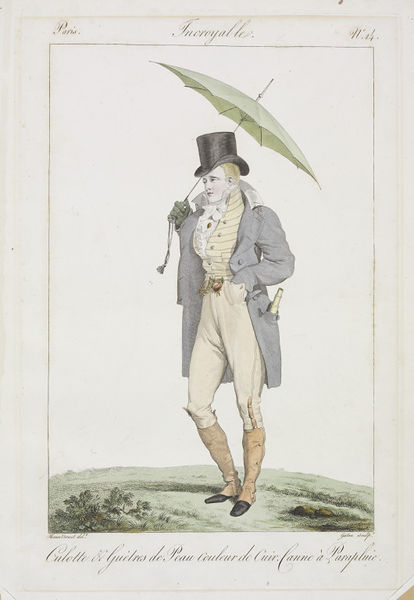