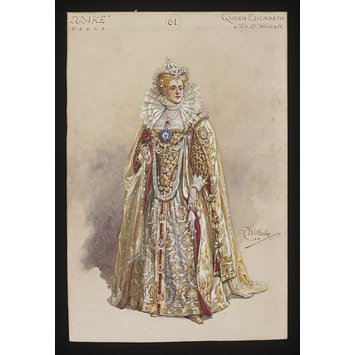 Costume design for Dorothy Woodall as Queen Elizabeth I. The design depicts a full length female figure wearing an Elizabethan style costume. The costume consists of a yellow and white patterened skirt ,bodice, sleves, and long oversleeves decorated with jewels, bows, and ropes of pearls. The figure also wears an elaborate lace ruff around her neck, and a coronet on her head. She holds a red rose in her right hand, and a white handkerchief in her left. There is ink and watercolour shading applied behind the figure.

' 5 '
Textual information; At the lower right hand side of the figure.; Handwriting; Pencil

This costume design by Wilhelm is part of a collection of 15 designs by Wilhelm bequeathed to the Theatre Museum by the late Michael Hugh Venables. The design was executed for a production of G. H. Clutsam & Hubert Bath's opera "Young England" at Daly's Theatre, December 23rd 1916. The librettist was Basil Hood, and the scenery was designed by Joseph & Phil Harker. The production was conducted by Arthur Wood, and the choreography was arranged by Espinosa. The costumes for the principals were made at the famous London costumiers B.J. Simmons & Co. The cast included Doris Woodall as Queen Elizabeth I, and Harry Dearth as Francis Drake. The production later transfered for a short run at Drury Lane in February 1917.

Historical significance: Wilhelm (William Charles Pitcher RI, 1858-1925) was one of the most inventive and prolific late 19th century costume designers whose early passion for stage spectacle led to his employment designing pantomime costumes for Drury Lane Theatre. His attention to detail and ability to create visually stunning and decorative costumes were aspects of his work that appealed to producers and public alike, and led to his constant stream of work throughout his life. He was a well known illustrator of children's books as well as a costume designer, but it was his detailed and superbly decorative designs for the Empire Theatre ballet costumes from 1908 to 1915, led to an obituary writer noting: "The name C. Wilhelm should be written in gold on the history of ballet".

In accordance with Victorian taste for the picturesque, theatrical scenery and costumes of major London productions had become increasingly more spectacular and well-researched during the 19th century. By 1916, when Wilhelm designed the costumes for "Young England", a George Edwardes and Robert Courtneidge production of a 'light opera' with words by Basil Hood & music by G.H. Clutson and Hubert Bath, the public had come to expect spectacular costumes in period productions. Wilhelm would have been an obvious choice as costume designer, having designed Elizabethan costumes before for the spectacular "The Armada", Drury Lane 1888, and because his drawings had the reputation as a perfect guide for the costumier who could read from them at a glance the exact cut of a costume. The sets for this production were done by Joesph and Phil Harker, and it is interesting to note that Wilhelm's designs for "Young England", produced while the work was in preparation, were titled "Drake", following the success of the play "Drake" at His Majesty's Theatre, 1912 and 1914. 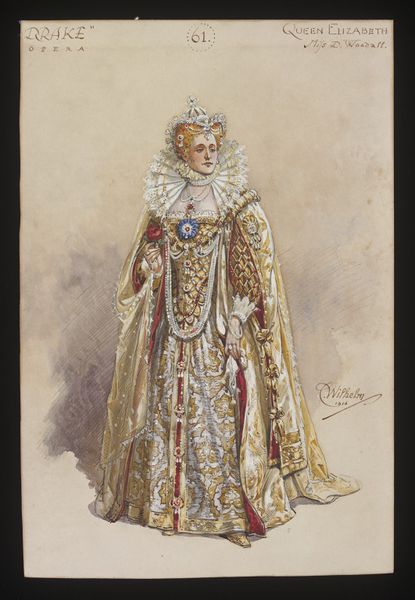