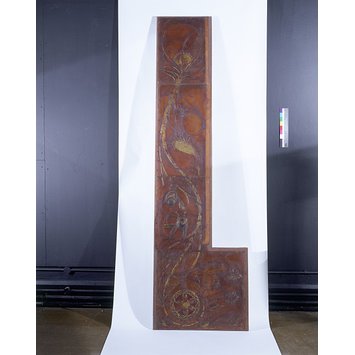 This panel was part of a set designed by CR Ashbee to decorate the walls of the staircase in the front hall of the Magpie and Stump, 37 Cheyne Walk, Chelsea. The leather panels covered the back wall of the hall; the staircase ran up alongside this wall, under an arcade.

CR Ashbee's mother, Mrs Elizabeth Ashbee bought the freehold of 37 Cheyne Walk in 1893. Ashbee built the Magpie and Stump for her and her two younger daughters, Agnes and Elsa to live in. They moved there in Spring 1894. He also had an office in the house. It is named after a pub, the Magpie and Stump Inn, which had stood on the site since the sixteenth century; the last building having burnt down in 1886. Much of the interior decoration of the new house, including this panel, was made by the Guild of Handicraft to Ashbee's designs.

Ashbee's Magpie and Stump was demolished and the site redeveloped in 1966, at which time the V&A was invited to salvage decorative elements of the house, including this piece.

Historical significance: The Magpie and Stump panels were the Guild's most ambitious work in leather to date. Ashbee was attempting to revive traditional techniques, although the decoration is entirely contemporary, its swirling forms are close to the whiplash curves of Art Nouveau.
The panels are decorated with a pattern of intertwined briar-branches, interspersed with flower and seed heads and birds. Above the larger panels was a freize with Tudor rose and wheel of fortune motifs.

Ashbee founded the Guild and School of Handicraft in 1888. Originally based in Whitechapel, East London, occupying Essex House in Mile End from 1891, the Guild was founded in line with the principles of the Arts and Crafts movement. Based on the model of the medieval workshop, the Guild was meant to be a co-operative environment with menbers expected to take part in extra-curricular social and leisure activities - river trips, plays and sports.
The Guild produced leather, furniture,interior design, metalwork , jewellery and books, with much of the work based on Ashbee's designs. Revival of traditional techniques, education of working people and encouraging satisfaction through labour are key Arts and Crafts features of the Guild's work .

The move to Chipping Campden in Gloucestershire in 1902 was one of the most radical aspects of the Guild's existence, with 150 people, the Guildsmen and their families moving from the East End to the Cotswolds. Ashbee believed that living a simple, `collective life in rural surroundings would add to the health and well-being of the craftsmen and consequently the work they produced.

Although the work of the Guild was widely exhibited, increasing financial difficulties from 1905 eventually resulted in the voluntary liquidation of the Guild in 1908.

Decorative leather panels were fashionable wall coverings in the sixteenth and seventeenth centuries, and were revived in the 1890s. They were embossed by hand and several pieces of leather were stitched together to form the wall covering. Ashbee had become interested in leather in about 1890, using tools imported from Germany where, he believed, the best leather was being produced at the time. Embossing involves pressing a pattern onto the surface of the leather, resulting in a three-dimensional effect. Due to their age, these panels are now considerably flatter than they were intended to be.

From the Magpie and Stump, designed by C.R. Ashbee, made by Bill Hardiman of the Guild of Handicrafts, London, 1893-4; Foliage, chicks and nest motif 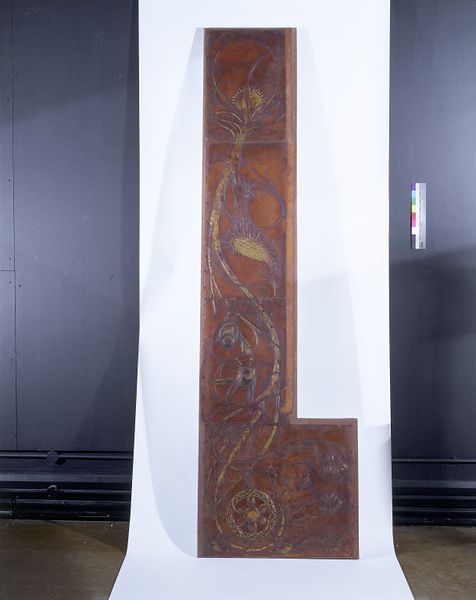