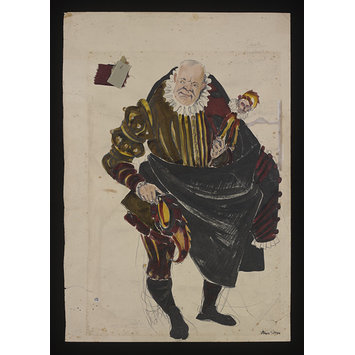 Costume design for Frederick Sharp as Rigoletto in Act I. The design depicts a full length male figure wearing late 16th century style costume. The costume consists of green, yellow, black & red parti-coloured doublet and hose, worn with a white ruff, black cloak and boots. The figure holds a red and yellow jester's hat in his right hand, and in his left he carries a "jester's sceptre" in the shape of a jester's head with cap and ruff. 4 Fabric swatches are pinned to the upper left hand corner.

' Mr SHARP RIGOLETTO '
Textual information; Across the bottom of the design.; handwriting; pencil

' Cloak / T**** / of coat / Same as / Rigoletto's / Hat / Red / Russet '
NOTE : some of these letters/words are indistinct.
Textual information; Along the right hand side of the figure.; handwriting; pencil

This costume design by Alix Stone is part of an extensive collection of designs purchased by the Theatre Museum directly from the artist in 1994. The design was executed for a production of Giuseppe Verdi's opera "Rigoletto", performed by Sadler's Wells Opera at Sadler's Wells, September 21st 1955. The production was translated by Edward J. Dent; conducted by Leo Quayle; and directed by Powell Lloyd (who also designed the scenery). The dances were arranged by Peter Wright. The cast included Robert Thomas, Frederick Sharp, Marjorie Shires, and Anna Pollak. 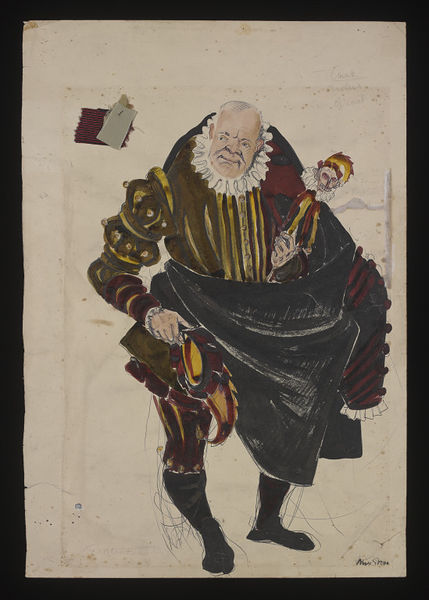